Does the score of "Blade Runner 2049" have ambitions to rival Vangelis’ original? 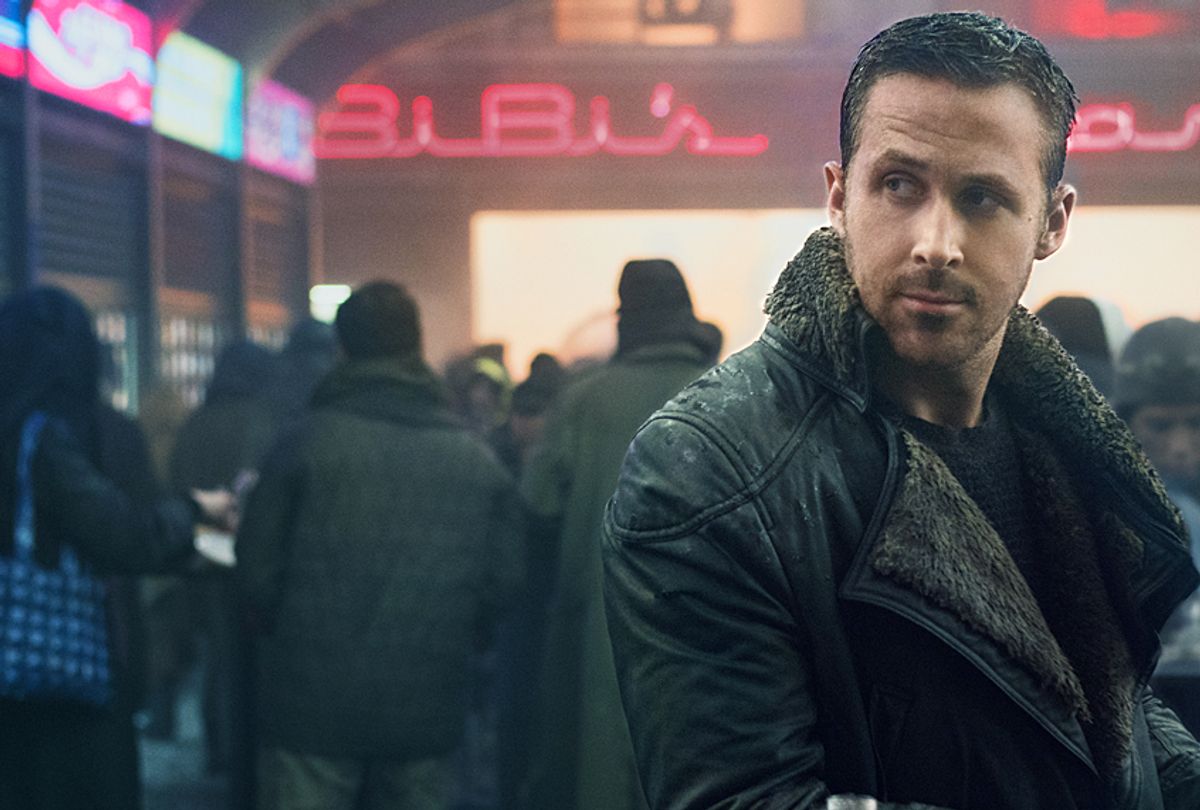 Like the film it so beautifully scores, “Blade Runner's" soundtrack suffered a long, protracted slog to certifiable cult status.

In 1981, Greek composer Vangelis was a proverbial hot Hollywood commodity, who had just scored an Oscar for his soundtrack to “Chariots of Fire.” A reformed psych-rocker — he used to play keyboards in a Greek psych-prog outfit called Aphrodite’s Child, whose 1972 album “666,” a concept album about the Book of Revelations, is itself something of a cult classic record — Vangelis had previously collaborated with director Ridley Scott on a highly sensuous 1979 commercial for Chanel No. 5. Having completed the shooting for “Blade Runner” in 1981, Scott set up a private screening for Vangelis at Pinewood Studios. Vangelis liked what he saw (he has described feeling “stimulated” at the sight of Scott’s images), and set to work.

In the early 1980s, electronic music scores were just becoming fashionable. The score to Michael Mann’s “Thief” catalyzed the particularly fruitful career of German krautrock pioneers Tangerine Dream, who turned out some 20 soundtracks throughout the decade. John Carpenter and Alan Horwath’s synth-heavy score to the futuristic cheeseball thriller “Escape from New York” (also 1981) dovetailed adroitly with Carpenter’s sparse, minimalist direction. And Vangelis’ “Chariots” score combined synths with layered choral numbers, resulting in a seemingly anachronistic musical melange, sending a period piece about Olympic runners sprinting into modernity. Where keyboards and synthesizers had previously been used as mere background “bed music,” designed to provide a rough sonic texture that allowed directors and composers to imagine more fully realized soundtracks, they were moving to the fore in early 1980s. (That a few synths and a drum machine are a bargain compared to a symphony orchestra probably didn’t hurt things.)

Perhaps most improbably, Vangelis combined all these elements, as he put it, “instinctively,” feeling his way through Scott’s images instead of devising some masterfully detailed orchestration. On paper, it scans like a project of Brian Wilsonian scale and stupidity. On record, however, these ingredients hang together in a perfect balance, elevating not only Scott’s movie but the very category of the electronic film score. Though it was acclaimed upon the film’s release (it was nominated for a Golden Globe), and an encouraging note in the end credits promised a commercial release, it would be more than a decade until Vangelis’ “Blade Runner” score would be officially available.

In lieu of the original music, an “orchestral adaptation of music composed for the motion picture by Vangelis” attributed to the “New American Orchestra” and cooked up by American composer Jack Elliott, hit the market in 1982, which is a bit like expecting an iPhone X and getting a cheap knockoff iPhone X that only runs identity-thieving apps — in short, a total rip-off. Snatches of the original tracks cropped up on Vangelis’ 1989 compilation “Themes,” and on bootleg recordings swapped in tape-trading networks and at sci-fi conventions, before Atlantic and East West Music finally released Vangelis’ original score in 1994, with a definitive three-CD set released in 2007 to coincide with the film’s (and the score’s) 25th anniversary. The anticipation surrounding these official releases, and the various cobbled-together bootlegs that circulated in their stead, served to cement the cult credentials of the “Blade Runner” music.

But there’s more to it than that.

On those melancholy nights when the rain’s falling in sheets and all you can bring yourself to do is ease an aching heart with a rocks glass of brown liquor and stare out at the neon din of the modern city, where the smog hangs like the smoke of a thousands cigarettes, nothing hits like the score to “Blade Runner.” Jerry Goldsmith’s soundtrack to “Chinatown” is fine. Bernard Hermann’s “Taxi Driver” score is remarkable in its own way, sure. Even some of Henry Mancini’s slinky crime-jazz standbys (like the themes to “Touch of Evil” or “Peter Gunn”) are suitable, particularly if your woes are edging into parody. But for conveying that sense of eternally contemporary, tech-noir alienation, “Blade Runner” outclasses all comers.

It’s emotive enough to make you want to take up smoking, or alcoholism, or private detective work; to install chintzy horizontal blinds just so you can peek through them; to engage in a rending whirlwind love affair just so you can have your heart broken at the end of it. It is music perfectly suited to the mellow mood of human sadness. In its chilliness, its isolation, its painfully desirous synth sounds, it superlatively articulates the theme of “Blade Runner.”

It’s an even finer expression of “Blade Runner” than “Blade Runner” itself, more “Blade Runner” than “Blade Runner,” to paraphrase a snatch of dialogue from the new sequel, “Blade Runner 2049.” Where Ridley Scott’s original film — no matter which cut or version you’re watching — is cool, Vangelis’ music exudes a peculiar warmth, faintly radiating like the glowing handle of a futuristic umbrella. Where Scott’s direction is stiff and somewhat alienated, guiding performances that feel wooden by and large, the score invites, entrances. (One could gamely argue that the frosty, remote, soulless quality of Scott’s direction speaks to the lack of empathy that defines the world of “Blade Runner”; but such a defense strikes me as generous when offered in the service of Scott, a director whose genuine artistic accomplishments accomplishments are so few and far between that they feel like monkey-at-a-typewriter flukes, and not the product of some bona fide auteur sensibility.)

Nevertheless, where “Blade Runner” feels at times like a movie directed by a well-calibrated android (controlled, careful, stately without seeming self-consciously magnum opus-y), the “Blade Runner” soundtrack sounds as if it was composed and conducted by one of the story’s renegade replicants. Vangelis offers the throbbing contrapuntal heart to Scott’s throbbing head. This is music for robots yearning to become human.

When it was announced that Jóhann Jóhannsson, a three-time collaborator with “Blade Runner 2049” director Denis Villeneuve, had left the project, it immediately felt like an aspersion cast on the film itself. After all, music was so integral to the original. A last-minute change-up that saw Hans Zimmer and Benjamin Wallfisch swapped in for Jóhannsson betrayed a potential lack of vision, as far as the score goes. It didn’t help things when El-P, one half of the heralded hip-hop duo Run The Jewels, shared his extremely good commission for a “2049” theme, which was itself rejected. Director Villeneuve reportedly wanted “something closer to Vangelis,” which itself proved an uneasy portent. After all, simply replicating such a truly inventive score seemed to speak not to Villeneuve’s faithful vision, but his lack of it.

Any lingering panic that the soundtrack to “Blade Runner 2049,” which finally arrived in cinemas this Friday, stinks can be safely put to bed. It is, like much of the rest of the film, wholly serviceable. Like Villeneuve’s broad, sparse, “Save-As-Desktop-Wallpaper”-ready images, which feel fittingly Ridley Scott-like, Zimmer and Wallfisch’s score plays like a suitable tribute to Vangelis. Indeed, some of the original motifs reoccur in telling moments — those when Ryan Gosling’s LAPD blade runner, “K,” is most confronted by the conditions of his own humanity. (As with the original, whether or not “K” is human or a replicant is already a point of major speculation, and one I won’t resolve here, at the explicit and repeated request of the filmmakers and studios. Suffice it to say that, given the franchise’s narrative preoccupation with memory implants and its thematic focus on what it could even mean to be authentically human, the true identity of “2049’s" protagonist is a mystery even to him.)

By and large, the music of “Blade Runner 2049” is so sparse as to seem almost nonexistent, occasionally wafting through the awe-inspiring, if largely solemn, directorial dioramas Villeneuve assembles, like the faint sound of white noise humming in a sealed-off aesthetic vacuum. It is a mere texture. And in this sense, it feels less like a tribute to Vangelis’ soundtrack than a regression from it. On the rare occasion when those Vangelisian synths squeal to life, the desperate nostalgia impulse renders them shrill. As stock, circa 2017 Hollywood movie soundtracks go, Zimmer and Wallfisch’s work is accomplished. But as inheritors to the grandaddy of 1980s synth soundtracks, and one of the most beloved film scores of all time, it scans as a pale imitation. Like the original Nexus-6 replicants of the original “Blade Runner,” the lifespan of their score feels drastically, if not altogether tragically, limited. Living up to the lofty reputation of what might be the electronic soundtrack of its era is no small task. But then, one of “Blade Runner’s" grander themes is precisely that desire to surpass the seemingly unsurpassable, to drive toward perfection, to stumble upon little miracles.

And then there’s that other theme: empathy. Like its predecessor (and Philip K. Dick’s source novel “Do Androids Dream of Electric Sheep?”) “Blade Runner 2049” is explicitly engaged in the question of what it means to be human, what it means to have soul, how it is that the breath of life can pass from one life to the next, and whether these questions matter much at all. One of the sillier, more aggressive Phillip K. Dickean conceits that has yet to make the leap from the original book to the “Blade Runner” “universe” is the concept of mood organs, futuristic devices dialed to different settings to make human beings feel a range of feelings, from a 594 (“pleased acknowledgement of husband’s superior wisdom in all matters”) to a 481 (“awareness of the manifold possibilities available”) to an 888 (“the desire to watch TV, no matter what’s on it”) and a 3, a paradoxical state that stimulates the brain into wanting to dial up a new mood.

In the world of Dick’s book, mood organs — and the made-up religion of Mercerism — serve to differentiate the novel’s human characters from its android synthetics, on the basis of their capacity for empathy and their ability to share their feelings with another person, or the whole of humanity. It is an irony typical of Dick’s sardonic, absurd visions of the future that this very capacity for fellow-feeling needs to be mechanically augmented.

If Dick’s novel and the two “Blade Runner” movies are fundamentally about the bogusness of this divide, then the original film’s iconic soundtrack is the songbook for a new religion. Vangelis marshals seemingly apathetic electronics and makes them feel fully alive, wailing on his Yamahas like they’re mood organs. This is music not only for robots who yearn to become human, but for those who are, already, in their states of imperfection and oblivious grace, more human than human.