Who in the hell is Roy Moore?! 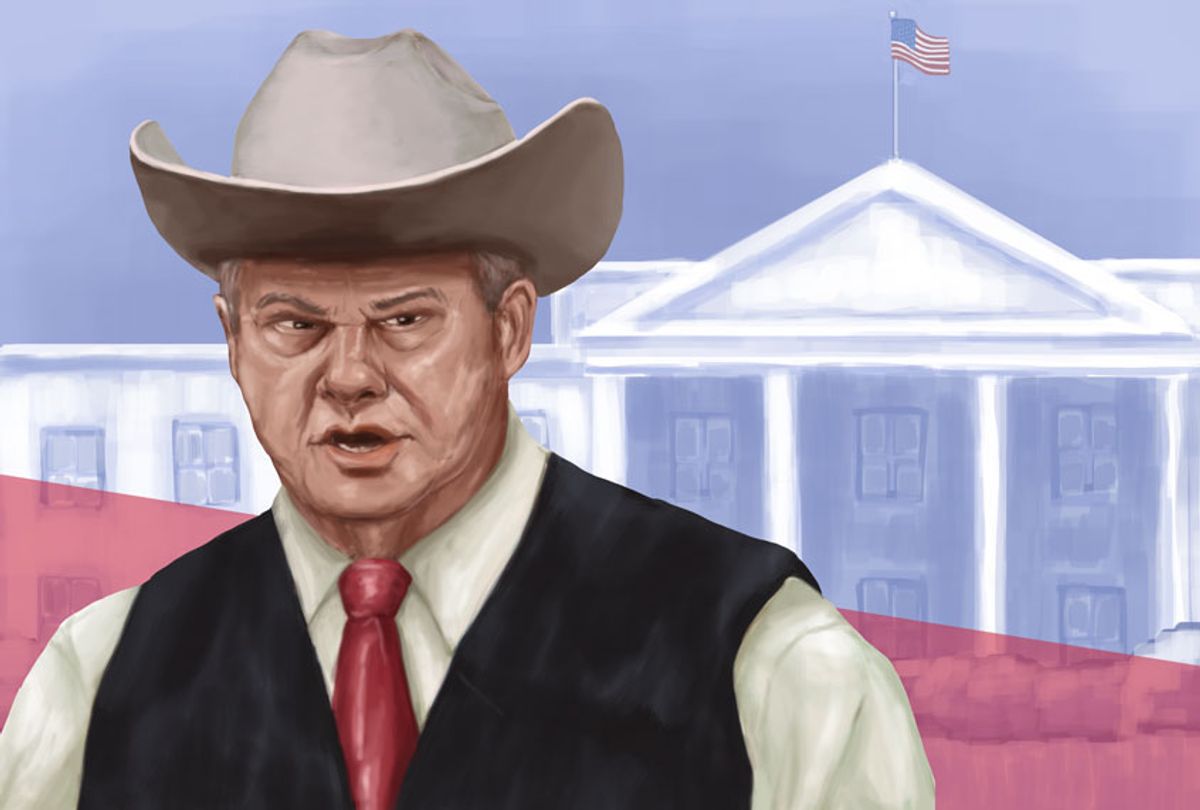 WELL, ISN’T THAT SPECIAL ELECTION? Moore won the Republican Senate primary runoff last month against interim Senator Luther Strange. Moore will face Democrat Doug Jones in a special election in December to fill the seat formerly held by Jeff Sessions, who left to become Attorney General under President Trump, where he has been treated slightly better than a roll of paper towels in San Juan.

Strange had been endorsed by President Trump, while Moore was backed by former Trump Chief Strategist Steve Bannon after a one-question interview (“Moore . . . that’s not a Jewish name, is it?”)

THIS MAY EXPLAIN THINGS: Moore was born in Gadsden, Alabama. He described his upbringing thusly: “Early on, my dad shared with me the truth about God’s love and the sacrifice of His own Son.” Sadly, his father never shared with him the page in the dictionary with the word “metaphor.”

DERE GO DA JUDGE: Moore was twice removed as the Chief Justice of the Alabama Supreme Court. The first time was in 2003, after he refused to take down a monument of the Ten Commandments in front of the Alabama Judicial Building despite an order from a federal court. The second time was in 2016, when he instructed his probate judges not to issue same-sex marriage licenses after the U.S. Supreme Court had declared them constitutional. Other than that, he showed as much respect for the rule of law as the next guy, if the next guy was Pol Pot.

Moore began to commission the monument a month after his election in 2001. It took six months to complete and contained not only the Ten Commandments, but three blurbs:

“I couldn’t put them down! Worth the shlep!” – Moses

The final structure was 3 ft x 3 ft x 4 ft and weighed 5,280 pounds. Although, after all the lawsuits and the stressful two-year trial to remove it, the monument was down to 4,372.

Though the final verdict came down in August, 2003, the Ten Commandments monument was not actually taken out of the Judicial Building until the following July. Its first night out, the monument appeared on “Larry King Live” and took calls for an hour.

Moore was reelected Chief Justice in 2012 and four years later was indicted on six ethics violations related to his refusal to uphold same-sex marriage. Moore believes that marriage is between a man and a woman, unless your wedding planner is Satan.

His stand against same-sex marriage stems from Moore’s long-held tenets that homosexuality should be illegal, that openly gay individuals should not serve in government and that the Tony Awards should be held in Canada.

NO PODIUM: Moore ran for Governor of Alabama in 2010. Despite being endorsed by NASCAR legend Bobby Allison, he finished fourth in the primary, which he blamed on a faulty intake manifold.

WRITE TO LIFE: From 2006-2009, Moore wrote a weekly column for the conspiracy website World Net Daily. The column was originally called, “Did You Hear That?” before it was changed to “I Don’t Know About That, But I Heard Something . . .”

“WAIT, WUT?” THE SERIES: Last August, Moore inferred that the September 11 attacks were a punishment from God because Americans have moved away from religion. The remarks were immediately repudiated by God’s spokesman, Howard Rubenstein.

A devout creationist, Moore roundly rejects the theory of evolution. Which raises the question, “If a guy who hasn’t evolved doesn’t believe he did, does this prove his point?”

An early and consistent voice in the Birther conspiracy movement, Moore has often insisted that President Obama is secretly a Muslim. This claim has been denied repeatedly by Allah’s spokesman, Steven Rubenstein.

PRESIDENT TRUMP ON MOORE: “Let me just clear this up. I think if people had to list my best qualities, and we really don’t have the time to list them all even though that’s all people are talking about, but if they had to list them, number two would probably be my ability to clear things up. Number one, of course, is my numbering system for women. No one has ever had a problem with that. If I say you’re an 8, you’re an 8. It’s, it’s, what’s the word? Innate. Not “an 8.” Innate. Innate would be what it is. An 8 would be someone Harvey Weinstein had to settle for. Harvey Weinstein. Now there. There’s a guy who doesn’t have his own money. I feel bad for him. I feel bad. But maybe, and everybody talks about this, maybe if he made a movie about something other than the history of chocolate, maybe he makes some real money and the other stuff, the fake stuff, goes away. So, that’s my best quality, and number two is clearing things up. Which is what I’m going to do now. So, Rex Tillerson, who you know, walks by me in the hall last month. I say, ‘Hey, Rexxon from Exxon,’ which I made up right there and then. No one had ever thought of that. ‘I say, hey, Rexxon from Exxon, who do you like in the Alabama runoff Tuesday?’ And he says, ‘I like Moore on Tuesday.’ And I said, ‘Not Strange?’ And he says, ‘I know you’re a Strange guy, but it’s gonna be Moore on Tuesday.’ And a couple of skirts, a couple of 7s, overheard it, and here we are. Okay, now it’s all cleared up. And by the way, when I called them 7s, I was being kind. You know what? I think that, the kindness, that’s my third best quality.”

HEALTH SCARE: Two Halloweens ago, Moore suffered a mild heart attack when a child knocked on his door dressed as a gay Shiite nurse at Planned Parenthood.

Comedy Gop Roy Moore Satire Who In The Hell Is