Why privatization is a disaster for any democratic society

"In a totally free market health care system, you must be willing to let some patients die" 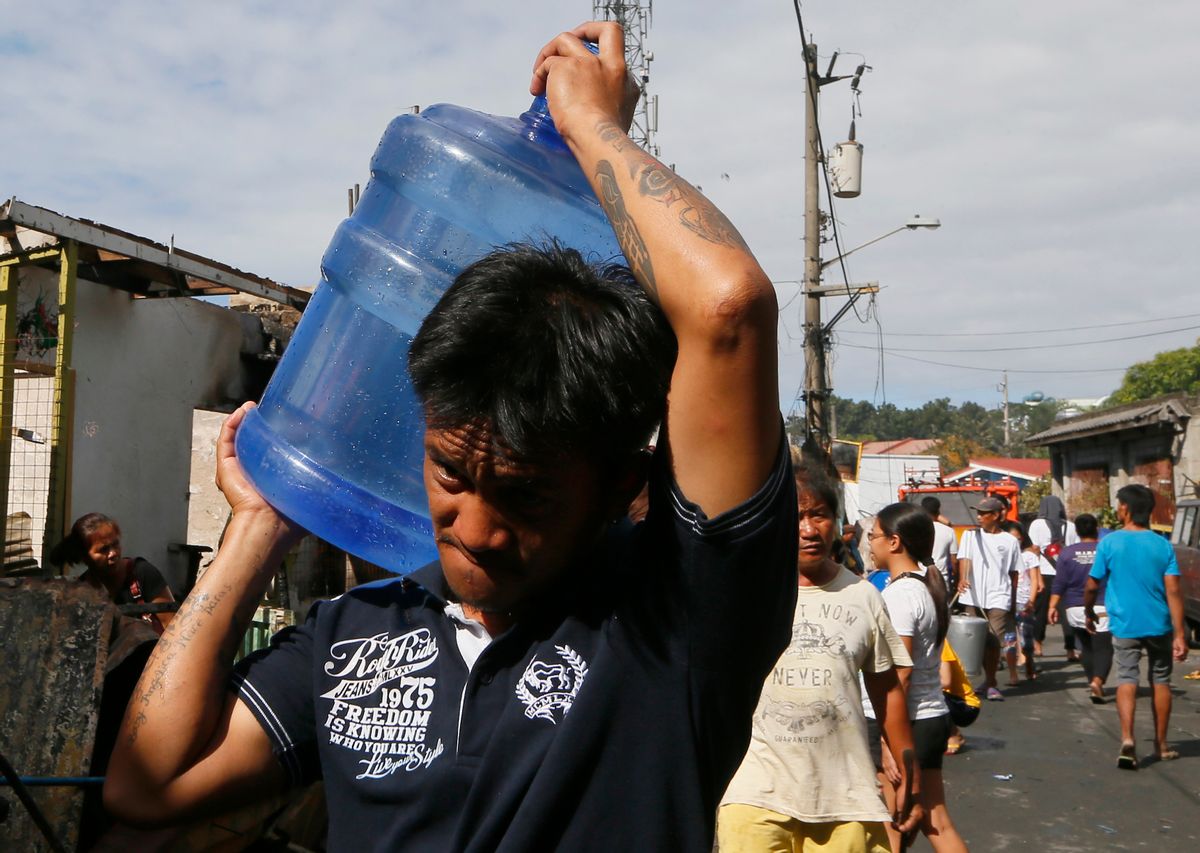 In this Feb. 23, 2016 photo, a resident carries drinking water following an overnight fire at a poor neighborhood in Muntinlupa city southeast of Manila, Philippines. Water was not supposed to become so expensive for Manila under a 1997 World Bank deal that privatized the seaside citys water and sewage management. That arrangement is under fire by the U.S. congressional committee that oversees the international development bank, which is now questioning whether the World Bank and its lending arm, the International Finance Corp., should join in such "public-private partnerships." (AP Photo/Bullit Marquez) (AP)
--

Most people looking to make big money are eager to disparage public systems as inefficient, wasteful, inferior. Many of those people are in a position to starve the public systems of funding, thereby making them less functional, and making the private options look more appealing.

But privatization is not the solution; it is the problem. Properly supported public systems serve more people in a more efficient and less costly way. We might begin by looking at FEMA, the underfunded disaster relief program much maligned for its response to Hurricane Katrina in 2005. But today it's a lifesaver for many people. And the alternative is an onslaught of businesses that seek profit among the hurricane victims desperate for water and food and supplies.

Privatization cuts us in two: we've become a nation of profit-makers versus the struggling middle/lower classes. This is true for health care, education, housing, and the environment.

"In a totally free market health care system, you must be willing to let some patients die." —emergency room physician Farzon Nahvi

Our privatized system is letting that happen. It's killing our children. Among 34 OECD countries, only Turkey, Mexico, Argentina, and Slovakia have a higher child mortality rate than the US. A National Institutes of Health report summarized: "The USA health care system appears the least efficient and effective in 'meeting the needs of its children.'"

The connection between the profit motive and quality of health care is strikingly depicted in a recent study by the Commonwealth Fund, which placed the U.S. last among major nations in access and health care outcomes, and concluded that "The U.S. performs poorly in administrative efficiency mainly because of doctors and patients reporting wasting time on billing and insurance claims." It's very clear that administrative costs are substantially lower in a single-payer system, less than one-sixth the percentage for many private insurers. Medicare allocates only 1 percent of total spending to administrative costs, compared with 6 percent for the privatized Medicare Advantage. A public system also has no need to spend money on advertising, which can make up over 15 percent of private insurance costs.

Education: Hedge Funds vs. the Children

Betsy DeVos' state of Michigan is a painful example of the perils of privatization. Michigan's K-12 system is largely unregulated, with charter schools competing for the same pot of money like so many profit-seeking corporations. The results have been miserable, according to recent nationwide assessments. Student proficiency has faltered, inequality between rich and poor districts has grown, and in places like Holland, MI (DeVos' hometown) white families have 'chosen' their way out of traditional public schools, leaving behind the children of poor Hispanic migrant workers. Says Western Michigan University professor Gary Miron about the charter experiment: "These are the most vulnerable students we have. Why do we experiment on them?"

But all is well for the banks and hedge funds, and for the Education Maintenance Organizations (EMOs) that buy up properties, lease them to schools for a little while, then sell them to the same schools for millions of dollars in profits.

Public schools, on the other hand, can work very well when the emphasis is on the student-teacher relationship rather than on business models. Jeff Bryant describes some of the attributes of the successful Long Beach, California school system: "respect for teachers... internal accountability... intense devotion to the well-being of students." This is similar to the much-praised educational system in Finland, where teachers are well-trained, well-paid, highly respected, and trusted to actually teach the kids rather than test them.

Parents want well-supported local schools much more than they want the choice of private options. A 2017 poll conducted for the American Federation of Teachers by Hart Research Associates found that 71% of parents chose "a good quality neighborhood public school" over "more choices of which schools I can send my children to."

Housing: Blackstone vs. the Rent-Burdened Family

The ravages of privatization are clearest in the aftermath of tragedies, as in New Orleans after Katrina. Public housing, still in good repair, was demolished so that developers could rush in and begin building upscale homes. The mostly poor black population of New Orleans has dropped from 67 percent of the residents to 59 percent.

Around the nation since the 2008 recession, affordable public housing has been the victim of a business model that disregards the tragic reality of people being turned out of their homes. Blackstone and other private equity firms—with government subsidies—buy up foreclosed houses, hold them till prices appreciate, and in the interim rent them back at exorbitant prices. Rana Foroohar calls these largely unregulated companies "great white sharks that have perfected the use of debt, leverage, asset stripping, tax avoidance, and legal machinations to maximize profits for themselves at the expense of almost everyone else." They carry out their home-wrecking schemes "with as little capital or risk to themselves as possible."

Environment: Eating and Breathing Chemicals vs. Preparing the World for Our Children

Scientific studies keep confirming that agricultural pesticides are poisonous to humans and to wildlife. Unbelievably, Monsanto sued the state of California for telling people about the threat to their health. Even more unbelievably, its reasoning was that it's 'unconstitutional' to use findings from the World Health Organization.

Equally disturbing is the deadly deceit of Exxon, which has covered up its own climate research for 40 years, and was joined by other oil-connected companies in lobbying against the Kyoto Protocol. The lobbying paid off. Fossil fuel subsidies in 2015 were estimated to be greater than the world's total health spending.

There are numerous other ways private companies imperil the rest of us in the name of self-interest and profit. The Florida Power & Light Co. has lobbied vigorously against solar panels, even though solar energy might have prevented the deaths of nursing home residents in overheated facilities after Hurricane Irma; Wyoming's Devon Energy abandoned plans for emission reduction simply because it now has a "friend" in charge of the EPA; cruise ships, which pollute the air each day as much as a million cars, apparently see no reason to spend some of their profits to clean up after themselves.

And here's one that should make everyone mad. As increasing privatization "starves the beast" of government, infrastructure is failing, and companies like Nestle pay nearly nothing to take over our water supply and sell it back to us. Globally, according to a Bloomberg report, failing infrastructure has led "to a near-total reliance on bottled water in parts of the world." Says Pakistani environmental lawyer Ahmad Rafay Alam: "Twenty years ago, you could go anywhere in Lahore and get a glass of clean tap water for free. Now, everyone drinks bottled water."

More profits for the privatizers, more health concerns and expense and disdain for the public.