The U.S. helped create a massive humanitarian crisis, here's how we can help fix it 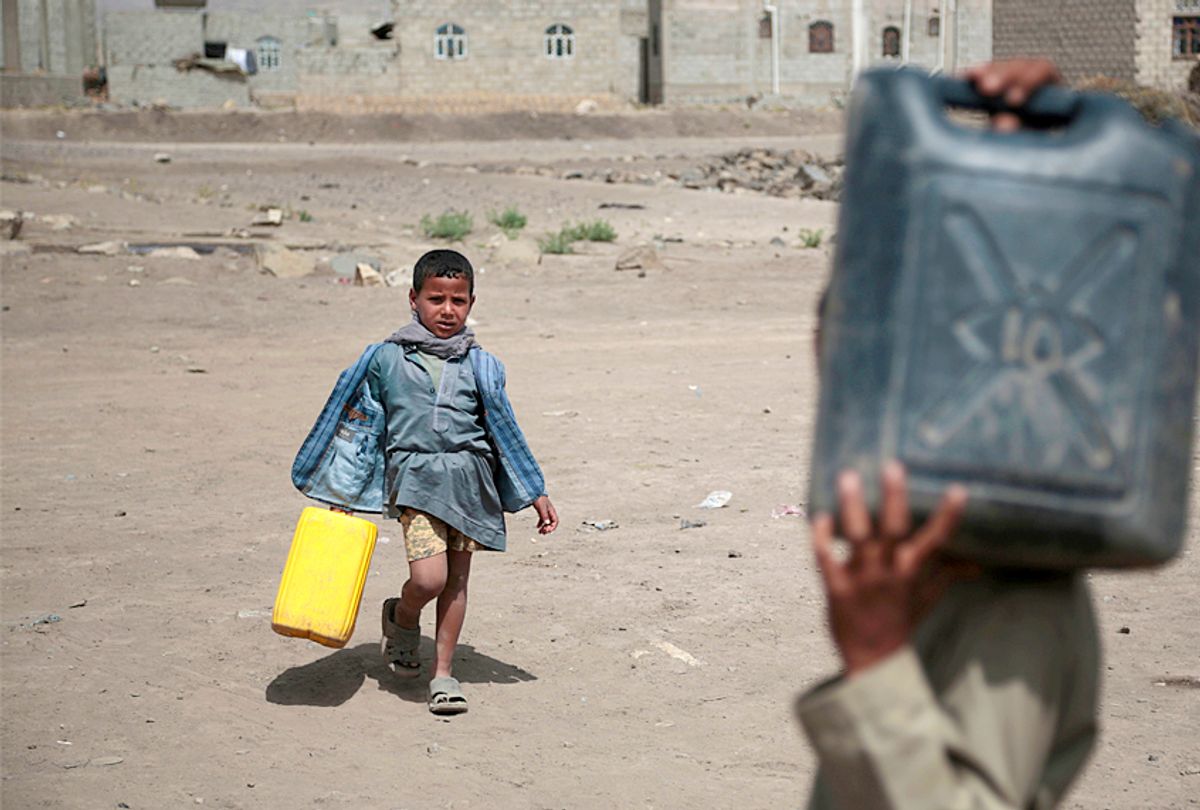 Boys carry buckets to fill with water from a well that is alleged to be contaminated water with the bacterium Vibrio cholera, on the outskirts of Sanaa, Yemen. (AP/Hani Mohammed)
--

Since March 2015, millions of people inside the country of Yemen have languished on the edge of social collapse due to brutal and inhumane conflict that has resulted in at least 10,000 deaths — many of them civilians.

On top of the violence of the conflict itself, Yemenis face desolation in their everyday lives, economic decay and the fastest spreading cholera epidemic ever recorded. The nation, and its people, lie at a tipping point between mere emergent crisis and something far worse.

Creating and compounding the situation is the fact that much of Yemen's infrastructure has been decimated by airstrikes connected to the ongoing war between the Saudi Arabia-led coalition, supportive of the country's president-in-exile Abdrabbuh Mansur Hadi, and Shiite Houthi rebels that have aligned with Yemen's former president, Ali Abdullah Saleh.

Both factions are morally questionable; neither is truly worthy of support. Nonetheless, it's notable that one of the region's wealthiest nations, Saudi Arabia, has engaged in aggression towards one of the region's most impoverished nations, Yemen. This is not a balanced conflict.

Throughout, hospitals, schools, factories and even funerals have been subjected to a relentless and indiscriminate bombing campaign. Less than half of the nation's hospitals are currently functioning, while doctors and other public employees have not received a single pay check in more than a year.

It's the perfect setting for a massive health crisis, and one is already boiling away. Cholera, a disease mostly contained and forgotten in the more developed parts of the modern world, is burning across a country whose infrastructure has been pushed back toward the 18th century by war.

Already, the outbreak in Yemen is on the brink of becoming the largest outbreak ever recorded, second only to Haiti's between 2010-2016. There have been at least 755,000 cases since the epidemic began at the end of April. According to Oxfam's most recent figures, it could surpass one million cases by November.

Salon spoke with Scott Paul, Oxfam America’s senior humanitarian policy expert, who described cholera as a "disease from the dark ages," something that should not be seen in contemporary society.

"All it takes to prevent is just the slimmest of resources and the most basic cooperation between government and civil society to provide health services," Paul told Salon in a phone interview.

Cholera can be prevented "in some of the most dire circumstances around the globe," he added.

Paul added that since Salon last spoke with him at the end of July, the situation on the ground has not changed for the better.

Delivering aid to Yemeni citizens has been an arduous process as a result of a variety of factors including difficulty navigating in and around the capital Sana'a, which is currently controlled by the Houthi's.

"We're working in a situation where access is incredibly difficult," Paul explained. "It's difficult for agencies to bring assistance to people who need it, and it's equally difficult for people who need assistance, to obtain it. Whether it's because it's unsafe for them to move, or if it's because leaving home to seek treatment would imperil their only source of a meager income that allows them to buy food."

"It's forcing people into impossible choices," he added.

"The delays and obstructions imposed on imports are weakening and putting pressure on the entire economy. It's making food prices go up and it's making people's incomes go down," Paul explained. "And it's also making it difficult to get critical supplies to people who need it."

"The restrictions, in violation of international humanitarian law, have delayed and diverted fuel tankers, closed a critical port and stopped life-saving goods for the population from entering seaports controlled by opposing Houthi-Saleh forces," Human Rights Watch has said of the blockade.

There are small glimmers of hope, however, as the violence has at long last gained the attention of the United Nations and a few lawmakers to take some sort of action for the people of Yemen.

It's been reported that both sides of the conflict have been blacklisted by the U.N. for grave violations against children in the conflict, and the U.N. Human Rights Council also recently launched an independent inquiry looking to scrutinize all parties involved in the war.

But the Saudi-led coalition is responsible for much of the devastation and has had crucial support in the form of logistics, intelligence, weapons and the refueling of planes by the United States — support that has never been authorized by Congress, but that could change in the near future.

Both British and American military officials are inside the command and control center from which airstrikes are ordered. The officials "have access to lists of targets, although they do not play any role in choosing them."

A new House bill supported by bipartisan lawmakers will look to end the U.S. support and complicity in the war. Rep. Ro Khanna, D-Calif., is sponsoring the legislation which also has 25 co-sponsors and would force a House vote, for the first time, on whether or not the U.S. should continue to aid the Saudi coalition.

"People have a right to know where our military is operating and where their tax dollars are being spent, especially when actions of our allies are leading to human rights abuses," Khanna told Salon in an emailed statement.

By invoking the War Powers Resolution, the House could help revoke U.S. support with a concurrent future vote in the Senate. It was reported in The Intercept that the bill is guaranteed a vote, which could occur as soon as next week.

"I am proud to have 25 of my colleagues in the House agree that a public debate must occur regarding U.S. participation in a military coalition led by Saudi Arabia and the United Arab Emirates in Yemen. This vote may cause discomfort for some, but we cannot forget our oversight responsibilities as members of Congress," the statement continued.

Revoking U.S. support is not a cure-all solution for Yemen, but it would be substantial help. Moreover, the country has a moral obligation to do so, especially in the wake of the immense suffering it has already assisted in. Lawmakers are finally standing up to executive powers that have greatly expanded since the war on terror began after 9/11 and has reached its third president.

Ultimately, only a political solution is vital to concluding a conflict that began without any clear objectives or an end goal.

"I can not overstate the symbolic importance and the signaling value of continuing to fuel coalition planes that participate in this armed conflict, including many missions that have resulted in the destruction of critical economic infrastructure and that have precipitated a lot of this economic and government collapse," Paul told Salon.