Bronies, the adult male fandom for “My Little Pony,” might be the best male-led nerd group for women

Those grown men enjoying "My Little Pony: The Movie" insist they are simply making room for cute in their lives 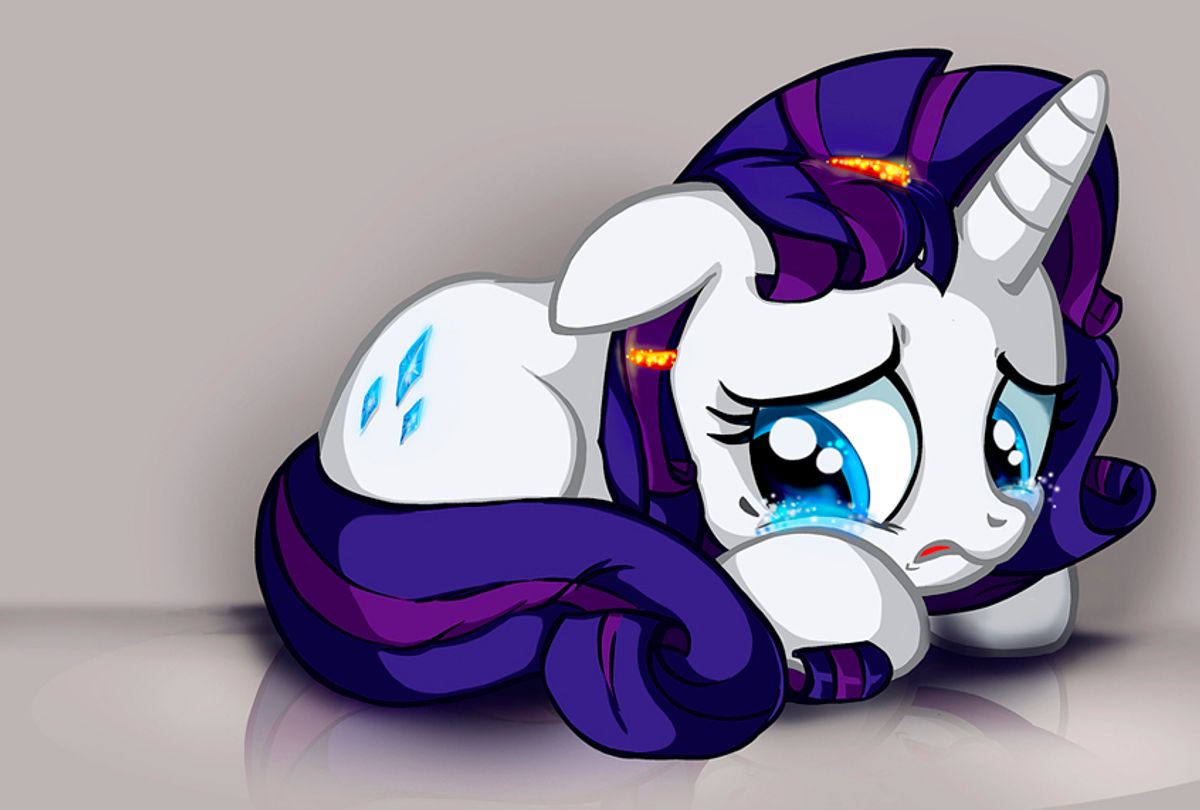 Bronies. We know them as the perhaps endearing, perhaps extremely creepy adult men who adore the children’s TV show “My Little Pony.” This weekend, they will join families in theaters to watch the newly released “My Little Pony: The Movie,” and among their ranks, there will be women — women who also call themselves “bronies.”

When the documentary “Bronies: The Extremely Unexpected Adult Fans of My Little Pony” came out in 2012, it only spotlighted male “My Little Pony” fans (the one main female fan in the movie appeared alongside her boyfriend, whom she met at an MLP fan meetup). Bronies were bros — it’s in the name — but more ladies are joining the brony ranks year over year.

Turns out, this predominantly male realm stands out as the most female-friendly in all of nerd-dom.

“Within our group, I would have to estimate females represent about 10 to 20 percent,” said Bill Crumlic, the 52-year-old media representative for Meetup group Bronies NYC, which has over 1,000 members. (A theater in Hackettstown, NJ even asked Crumlic if he knew any brony groups in its area who might want “a special showing” there.) “As far as why female membership is growing, I would attribute it to the open minds of the membership and the firm belief in equality that is inherent in most people.”

That sounds like a particularly optimistic viewpoint, but a female member of the group echoed the sentiment. “Compar[ed] to other events or conventions I have gone to, bronies are more respectful to females, [e]specially if they are in cosplay [dressed up as a character in the show],” said Janelle Olmeda, a 29-year-old Bronies NYC co-organizer. “Sometimes at anime conventions and such, females get more harassed and hit on because of their outfits.” And we all know what happened to women succeeding in white man’s nerd world during Gamergate.

The difference between bronies and their other nerdy brothers lies in their ethos. Alex Davidson, 27, lives in New York and has been “heavily involved with the [MLP] fandom for over five years.” What he loves about it is its “accepting nature” and the creativity of others in the fandom. “Bronies are an incredibly creative group. I’d say the art and the creativity is what keeps me here year after year.”

Olmeda’s sentiments on the culture are similar. “I consider myself a brony because I enjoy not only the show but what the show brings out in people,” she said. “Bronies definitely give out friendship and kindness . . .  You can go to events and conventions of MLP and find nothing but bronies behaving well, respecting others . . . all while enjoying being together to partake in these events.”

“Lizard,” a 25-year-old man who lives in Indiana and asked me to refer to him by the name he uses in the brony community, said he started to like the show because “cuteness was essentially absent from my life . . . just enjoying something that was totally alien to my demographic was the draw.”

The 2012 brony documentary depicted men who flocked to the show because it served as a venue for them to embrace their “girlier” interests and tendencies. We live in a society with segregated male and female values (slowly in the process of breaking down), where men are meant to be strong and stoic while women value sensitivity and tender friendships. “My Little Pony” acts as an outlet for men who believe in expressing those so-called feminine values.

Of course, concerns are inevitable when it comes to a group of men who idolize animals that look and act like little girls. A progressive mother I spoke to, who has a preteen daughter, was horrified when she learned the meaning of “brony.” Another woman I talked to about bronies, in her mid-20s, said there is good reason for skepticism and horror, revealing a side of brony culture that smacks of pedophilia and bestiality. She explained that among bronies, there were those drawn by sexual fantasy — those who wanted to be with the ponies. A quick internet search on the subject will lead you straight to MLP-style butt plugs, fleshlights and an MLP plush toy with a “hole in her butt that you can stick your penis in.”

Chris*, who used to work in a professional setting with brony clients, countered that the sex-motivated brony represents a “niche group and common misconception.” Turns out, they are a niche group, and those I spoke to are involved in sexual relationships with adult humans. Some enjoy MLP-based erotica; others opt for role-play. Like the overall brony population, they are both men and women. JP, a 33-year-old male fan of the show from Florida, put it simply, in describing the presence of “clop fiction,” aka MLP erotica: “Just look up rule 34.”

“Apple Trainer,” a 28-year-old Indiana man who one identified as a brony, said he knows of people who have purchased MLP-themed sex toys. He has some female brony friends, and they’re “more into it” than he is, including their participation in the kink dichotomy of ponies (“people in the community that enjoy being treated as a pony”) and handlers (“people that take care of, train, clean, etc. the ponies”) — a relationship that resembles that of a submissive and a dominant, involving two consenting adults.

Female bronies (also known as “pegasisters,” though most seem to prefer the term brony) appear to have a strong standing in all parts of the brony community. “Since the majority is male, female content creators and cosplayers tend to attract followers easier,” explained Lizard. “I’m sure the attention is a positive for some and negative for others.”

Lizard, who has heard women talk of being bothered “while cosplaying at some cons,” said he hasn’t heard about this happening at brony events. Furthermore, he suggested that women are accepted into brony fandoms because their presence can help fight negative brony stereotypes, like those expressed by that concerned mother of a preteen girl.

“As I’m recalling, male bronies get pretty excited that there is a female, because if she's into this she is cool, more understanding,” said Olmeda. She described feeling equal to men in the community, but noted that female bronies overall are less committed. “A few I've known had to stop coming because of work or they got into other things,” she said. “I have to say male bronies are pretty dedicated to this.”

And of course, some bronies are just looking for love. “The straight, male bronies usually are very nice because they look to date me,” said Monica Charles, 28, another Bronies NYC member.

While brony culture outdoes other predominantly male fandoms in its treatment of women, there’s still a ways to go. “We skew toward the nerdy side of things, which generally means that we're mostly men, but that's not to say that we don't welcome women into the group as well,” said Davidson. “It's something that I'd like to see balance out a bit more in the future.”