Humans helped kill off the giant animals of the Ice Age. We owe it to the ecosystem to restore what we destroyed 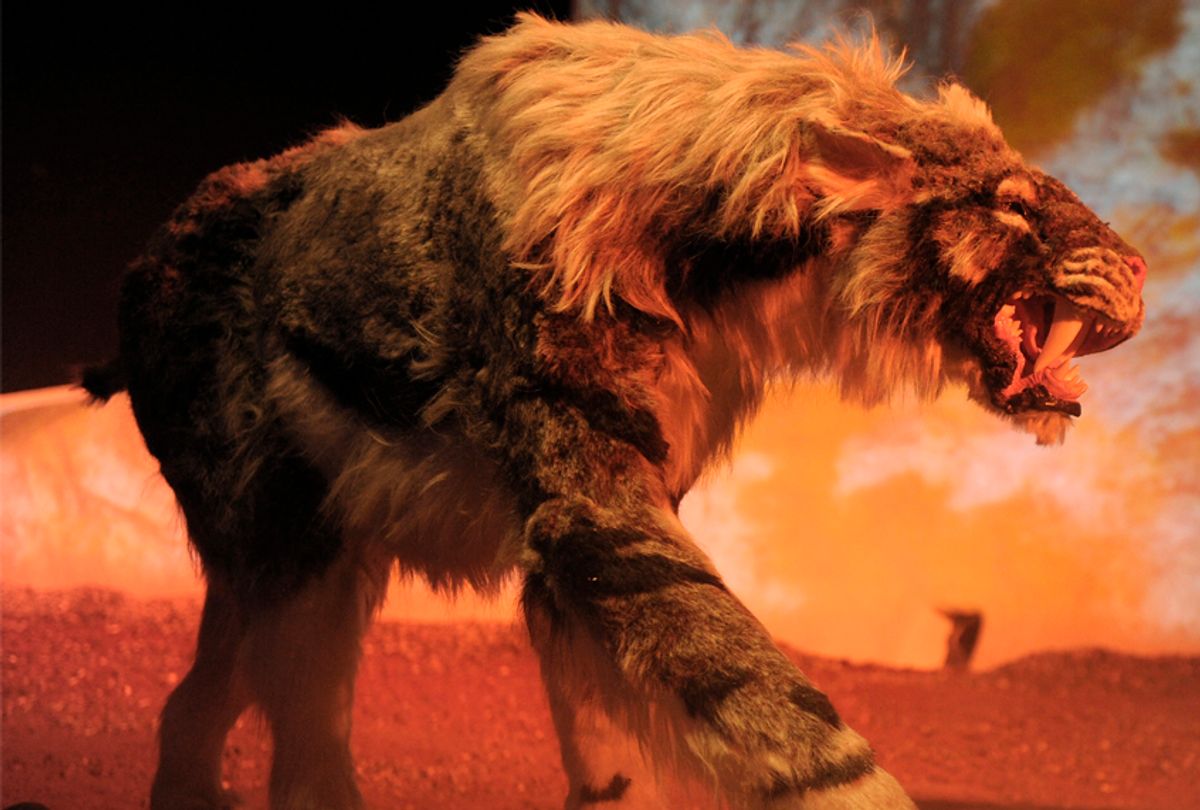 A replica of a saber-tooth tiger at the "Giganten Der Eizeit" exhibition in St Peter-Ording, Germany. (Getty/Krafft Angerer)
--

What if human beings had the power to take an animal that was completely extinct, and bring it back using only the DNA it left behind? No, I’m not describing the plot of "Jurassic Park" (though I never miss a chance to bring up "Jurassic Park," and the book is way better than the movie). I’m actually talking about creatures who lived much more recently than dinosaurs, even if it all feels like the distant past to us. What if we brought back extinct Ice Age animals?

The last ice age ended 11,700 years ago, and with it went a lot of really fantastic large mammals — known as "megafauna" — that were bigger in stature than their modern-day counterparts. Mammoths and saber-toothed tigers roamed the Earth, but also mastodons, cave lions, giant ground sloths and a giant armadillo-like creature called the glyptodon.

All of these animals have one major thing in common. Unlike the dinosaurs in "Jurassic Park," these Ice Age mammals coexisted with humans, and many were hunted by our ancestors too. If humans played a role in their extinction, the case for bringing them back is more compelling. De-extinction efforts often draw critics who accuse scientists of “playing God,” but many disagree. Speaking about the efforts to bring back a wide variety of creatures, paleontologist Michael Archer has said, “If we’re talking about species we drove extinct (sic), then I think we have an obligation to try to do this … I think we played God when we exterminated these animals.” An argument can be made for trying to “resurrect” some of these creatures, and there are scientists willing to try.

De-extinction is just what it sounds like: taking a species that has gone extinct, and through cloning or genetic engineering, bringing that species back into our world. Technically, de-extinction has happened once, albeit briefly: The bucardo (a goat-like creature) went extinct in 2000, and was successfully cloned in 2003 and born via a surrogate goat mother. However, the lone cloned bucardo suffered from breathing issues (common in early cloning efforts) and only lived 10 minutes. This might sound gloomy, but we’ve made a lot of advances since 2003, and the bucardo’s case proves that de-extinction is indeed possible.

The bucardo wasn’t an Ice Age megafauna, but the woolly mammoth certainly was. According to Revive & Restore, an organization focused on “genetic rescue of endangered and extinct species”:

The Woolly Mammoth has emerged as a leading candidate for this work. It can be attempted because a close relative of the mammoths still lives–the Asian elephant. Thanks to the similarity of their genomes, the genes of woolly mammoth traits can be edited into the Asian elephant genome, and the combination brought to life as an elephant cousin, once again adapted for the conditions of the far north.

The possibility of bringing back the mammoth might seem like a curiosity. Wouldn’t it be fun to see a woolly mammoth in a zoo? But the long-term goal is not to keep the new mammoths (they would be genetically engineered approximates, not exact replicas) in captivity. Instead, the Harvard Woolly Mammoth Revival team headed by George Church (the Church Lab) hopes to one day release healthy herds of mammoths into the tundra of Eurasia and North America. The reintroduction of these grazers could help convert the tundra back into the mammoth steppe, or grasslands, it once was. Research suggests grasslands sequester carbon from the atmosphere more efficiently than other ecosystems, which could help slow down climate change. Along the way, Church and his team expect to learn things that could help with the conservation efforts for Asian elephants.

Another candidate for de-extinction is the Siberian cave lion. In 2015, two frozen cubs were found well-preserved in the permafrost in Siberia. Cave lions went extinct about 10,000 years ago, and in 2016 it was reported that cloning scientist Hwang Woo-Suk planned to attempt to clone one of the cubs. It should be noted that Hwang is also pursuing bringing back the woolly mammoth.

Then there’s the Shasta ground sloth. While no attempts to de-extinct this giant relative of the modern sloth are currently underway, PZ Meyers makes a pretty convincing case for its usefulness in our modern world. Twelve thousand years ago, ground sloths fed on the seeds of the Joshua Tree, and thus distributed those seeds much farther than any modern animal. Joshua Trees are threatened by climate change, and if they go extinct, they’ll likely take down other parts of the Mojave desert ecosystem with them. Reintroducing a massive mammal that’s been extinct for so long may seem extreme, but it is possible that it could actually help rebalance the ecosystems in which Joshua Trees live.

Many more advances will need to be made before anything like a woolly mammoth, let alone a full herd, can walk the earth. Besides, there’s plenty of opposition to de-extinction efforts. The thing about ecosystems is, they’re extremely complex and usually have more variables than humans realize. Reintroducing an extinct species, especially one that has been gone for thousands of years, could always have unintended  and unforeseeable consequences.

Likewise, another issue is that of the genome: DNA does not an organism make. Just as you or I would be different if we were raised by different parents, even a perfectly cloned prehistoric animal (and remember, many will likely not be clones, but approximated through gene editing) may be different than the original, particularly after being raised by surrogate parents in an ecosystem that has moved on. In other words, there’s the risk that humans would be creating our idea of a mammoth, rather than a mammoth as it once was. And many worry that efforts to bring back extinct species will funnel money and resources away from the important work of conserving endangered species that are still with us today.

Revive & Restore doesn’t see it that way. They’ve argued that de-extinction and conservation don’t have to compete with each other, and that the lessons learned through de-extinction research will make it all worth it.

Alongside all the practical and environmental reasons for pursuing de-extinction, there’s another argument. In the words of Hwang, “If you don’t try, how would you know that it’s impossible?”