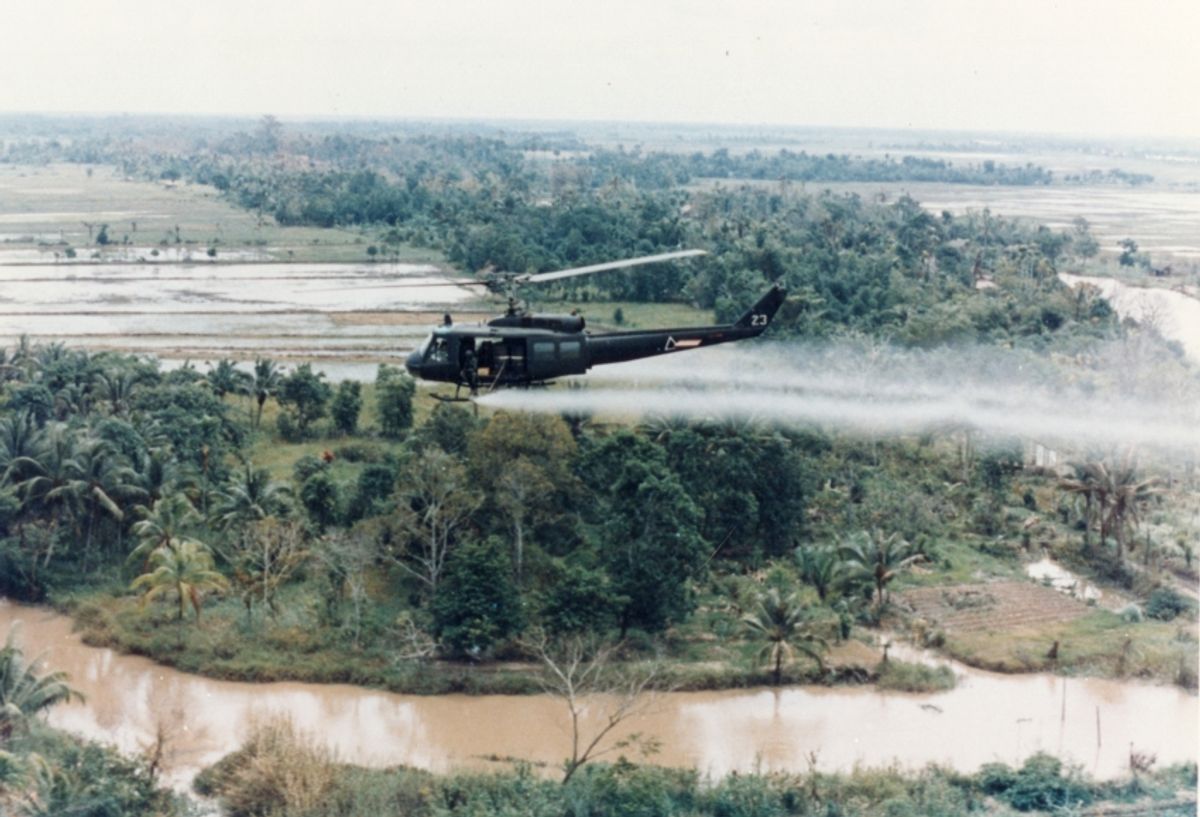 In the end, the military campaign was called Operation Ranch Hand, but it originally went by a more appropriately hellish appellation: Operation Hades. As part of this Vietnam War effort, from 1961 to 1971, the United States sprayed over 73 million liters of chemical agents on the country to strip away the vegetation that provided cover for Vietcong troops in “enemy territory.”

Some 45 million liters of the poisoned spray was Agent Orange, which contains the toxic compound dioxin. It has unleashed in Vietnam a slow-onset disaster whose devastating economic, health and ecological impacts that are still being felt today.

This is one of the greatest legacies of the country’s 20-year war, but is yet to be honestly confronted. Even Ken Burns and Lynn Novick seem to gloss over this contentious issue, both in their supposedly exhaustive “Vietnam War” documentary series and in subsequent interviews about the horrors of Vietnam.

Vietnam’s half-century of disaster More than 10 years of U.S. chemical warfare in Vietnam exposed an estimated 2.1 to 4.8 million Vietnamese people to Agent Orange. More than 40 years on, the impact on their health has been staggering. This dispersion of Agent Orange over a vast area of central and south Vietnam poisoned the soil, river systems, lakes and rice paddies of Vietnam, enabling toxic chemicals to enter the food chain. Vietnamese people weren’t the only ones poisoned by Agent Orange. U.S. soldiers, unaware of the dangers, sometimes showered in the empty 55-gallon drums, used them to store food and repurposed them as barbecue pits. Unlike the effects of another chemical weapon used in Vietnam — namely napalm, which caused painful death by burns or asphyxiation — Agent Orange exposure did not affect its victims immediately. In the first generation, the impacts were mostly visible in high rates of various forms of cancer among both U.S. soldiers and Vietnam residents. But then the children were born. It is estimated that, in total, tens of thousands of people have suffered serious birth defects — spina bifida, cerebral palsy, physical and intellectual disabilities and missing or deformed limbs. Because the effects of the chemical are passed from one generation to the next, Agent Orange is now debilitating its third and fourth generation.

A legacy of environmental devastation During the 10-year campaign, U.S. aircraft targeted 4.5 million acres across 30 different provinces in the area below the 17th parallel and in the Mekong Delta, destroying inland hardwood forests and coastal mangrove swamps as they sprayed. The most heavily exposed locations — among them Dong Nai, Binh Phuoc, Thua Thien Hue and Kontum — were sprayed multiple times. Toxic hotspots also remain at several former U.S. air force bases. And while research in those areas is limited — an extensive 2003 study was canceled in 2005 due to a reported “lack of mutual understanding” between the U.S. and the Vietnamese governments — evidence suggests that the heavily polluted soil and water in these locations have yet to recover. The dangerous quantity of residual dioxin in the earth thwarts the normal growth of crops and trees, while continuing to poison the food chain. Vietnam’s natural defenses were also debilitated. Nearly 50 percent of the country’s mangroves, which protect shorelines from typhoons and tsunamis, were destroyed. On a positive note, the Vietnamese government and both local and international organizations are making strides toward restoring this critical landscape. The U.S. and Vietnam are also undertaking a joint remediation program to deal with dioxin-contaminated soil and water.

The destruction of Vietnamese forests, however, has proven irreversible. The natural habitat of such rare species as tigers, elephants, bears and leopards were distorted, in many cases beyond repair. In parts of central and southern Vietnam that were already exposed to environmental hazards such as frequent typhoons and flooding in low-lying areas and droughts and water scarcity in the highlands and Mekong Delta, herbicide spraying led to nutrient loss in the soil. This, in turn, has caused erosion, compromising forests in 28 river basins. As a result, flooding has gotten worse in numerous watershed areas. Some of these vulnerable areas also happen to be very poor and, these days, home to a large number of Agent Orange victims. War propaganda and delayed justice During Operation Ranch Hand, the U.S. and South Vietnamese governments spent considerable time and effort making the claim that tactical herbicides were safe for humans and the environment.

It launched a public relations campaign included educational programs showing civilians happily applying herbicides to their skin and passing through defoliated areas without concern. One prominent comic strip featured a character named Brother Nam who explained that “The only effect of defoliant is to kill trees and force leaves to whither, and normally does not cause harm to people, livestock, land, or the drinking water of our compatriots.”

It’s abundantly clear now that this is false. Allegedly, chemical manufacturers had informed the U.S. military that Agent Orange was toxic, but spraying went forward anyway. Today, Agent Orange has become a contentious legal and political issue, both within Vietnam and internationally. From 2005 to 2015, more than 200,000 Vietnamese victims suffering from 17 diseases linked to cancers, diabetes and birth defects were eligible for limited compensation, via a government program. U.S. companies, including Monsanto and Dow Chemical, have taken the position that the governments involved in the war are solely responsible for paying out damages to Agent Orange victims. In 2004, a Vietnamese group unsuccessfully attempted to sue some 30 companies, alleging that the use of chemical weapons constituted a war crime. The class action case was dismissed in 2005 by a district court in Brooklyn, New York. Many American victims have had better luck, though, seeing successful multi-million-dollar class action settlements with manufacturers of the chemical, including Dow, in 1984 and 2012. Meanwhile, the U.S. government recently allocated more than US$13 billion to fund expanded Agent Orange-related health services in America. No such plan is in store in Vietnam.

It is unlikely that the U.S. will admit liability for the horrors Agent Orange unleashed in Vietnam. To do so would set an unwelcome precedent: Despite official denials, the U.S. and its allies, including Israel, have been accused of using chemical weapons in conflicts in Gaza, Iraq and Syria.

As a result, nobody is officially accountable for the suffering of Vietnamese victims of Agent Orange. The Burns and Novick documentary could have finally raised this uncomfortable truth, but, alas, the directors missed their chance.

This story was co-authored by Hang Thai T.M., a research assistant at the Posts and Telecommunications Institute of Technology, in Hanoi.