Wolverine and Judge Dredd walk into a bar . . . 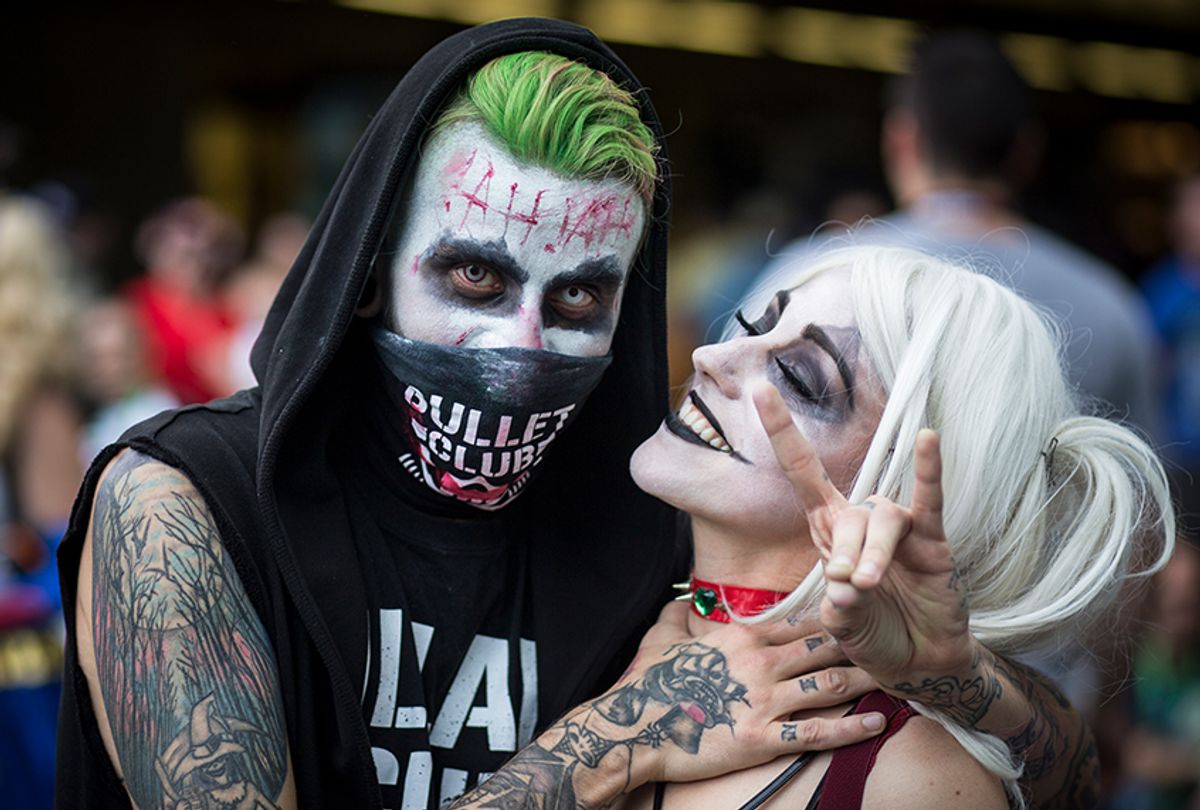 At the Molly Wee Pub on Saturday night, October 7, bartender Sean has established a casual rapport with Judge Dredd and his three, 30-something-year-old friends. They’ve come from outside of Morristown, New Jersey to spend a night at the Riff Chelsea hotel so they can hang out in the city post-New York Comic Con.

Judge Dredd is no longer wearing his costume. Now, he’s Alex, a 31-year-old man who’d done “the Dredd buzz” on his beard so he could look more like the futuristic cop played by Sylvester Stalone in the 1995 movie. His friends, who are looking for another place to keep up the party post-Comic Con, attest that he was the only Judge Dredd at the convention this year.

Meanwhile, bartender Sean is bopping around the dimly lit, moderately crowded bar, smiling and asking patrons wearing Comic Con lanyards where they’re from. “Everybody’s cool,” he says of the Comic Con crowd. “No problems, no hassle.” This is opposed to citywide events like SantaCon, which Sean, in a pleasant, Irish accent, describes as a “fucking disaster.”

Dredd and friends had tried to attend Comic Con’s “official after party,” as it’s described in a bright pink flyer featuring a pretty woman dressed as Harley Quinn, one of the more prevalent costumes at New York Comic Con 2017. When they arrived, the party at the Rosewood Theater right across from the Javits Center was “dead,” and the person running coat check had told Alex he’d have to pay $5 per piece to stash his elaborate costume.

The “party,” which had started at 5 p.m., was set to end at 8 p.m., and by 7:45 p.m., the lounge’s maze of leather booths held just 25 to 30 of Comic Con’s nearly 200,000 attendees. Filling the void left by this lack of after party are the many Irish-style pubs surrounding New York’s massive Javits Center by the Hudson River on West 34th Street.

Another bartender with an Irish accent, Mick, works at McGarry’s on 9th Avenue between 34th and 33rd Streets. The classic pub serves Smithwick’s Irish Ale — though the tap was broken on Saturday night — and has a delightfully sticky, wooden bar that breaks up two seating areas, one outdoors in the back. A woman dressed as a sheriff — “That’s from ‘Walking Dead,’ dude,” my friend tells me — sits at a table near the entrance across from Wolverine. At the bar, two enthusiastic young men cosplay “Naruto.”

The “Naturo” guys had come to Comic Con from Connecticut, where they’ll head back later tonight. They scroll through pictures from their day over glasses of hard liquor, proudly showing us the various “Rick and Morty” costumes they’d seen, along with what looks like a conga line of “Deadpools.” They leave by the time Mick starts describing his highlight from Comic Con 2016.

“Last year there was a Robert Downey Jr., so good I thought he was the real one,” says Mick, who has gray hair and laughs when I ask if he’s the manager (he isn’t). Anyway, Robert Downey Jr. was checking out a woman dressed as Superwoman — “she was good looking”— and his wife noticed, told him to stop. He said he was only looking at Superwoman because she was talking shit about her, his wife. So the wife went over and clocked Superwoman in the face. Robert Downey Jr. eventually had to jump in to intervene.

Though Mick says the bar is tamer this year, McGarry’s experiences a “200 or 300 percent increase” in traffic during Comic Con over the weekend, mostly because more people work in the area than live there, so patrons usually come during the week. Compared to the regular weekend guests, Mick says the Comic Con people are “great — they’re all out to have a good time, and every other night I’m here all my customers are here because they’re not having a good time.”

There are fewer costumed Comic Con goers this year, Mick noticed, which Anton, the bartender at Rocky’s on 34th and 10th Ave, echoes. He, too, says Comic Con crowds got rowdier in 2016. This time last year, Rocky’s was “packed with people dancing,” but this year convention goers, some wearing full white and black suits (cosplaying? — it’s hard to tell), sit in small groups at tables scattered around the bar and grill, which has a big oven surrounded by pizza boxes on one end and a rectangular, granite bar at the center.

Foot traffic at Rocky’s increases “like 70 percent” during Comic Con, with “a lot of people from Texas, Tennessee, everywhere, ya know?” says Anton in a tough to pinpoint accent, leaning his chiseled face in close over the bar.

In San Diego, home of the country’s original Comic Con founded in 1970, Robert Yumul, general manager at a cocktail bar called The Lion’s Share right near the city’s convention center, says “business increases twofold” during the Con, which took place this year in July. This includes private events held by attendees ranging from “the lawyers for the Batman intellectual property” and a group from the image sharing company Imgur. “Any sort of pop culture, including memes, is fair game,” says Yumul of Imgur’s booth at the convention.

“We had someone dress up as what everyone thought was Sailor Moon, but it was actually Sakura from ‘Street Fighter,’” Yumul says. “There were lots of obscure outfits . . . I’m far removed from the gamer, comic book, geek world, so I’m just looking around like I have no idea what these people are.”

At a cocktail bar, you’d imagine loud, costumed guests clash with average patrons, but that’s not the case during Comic Con at The Lion’s Share, which has two money signs on Yelp and a peacock mounted on the wall next to surreal artwork. “It’s a pretty relaxed vibe in here, nothing weird and crazy,” Yumul describes. “My favorite celebrity sighting the last two or three years, we had the pleasure of having Aisha Tyler [the voice of Lana in adult spy cartoon “Archer”]. We all know it’s her, and we kinda geek out . . . but we leave her alone, and that’s why she keeps coming here.”

In New York, the sheer number of bars makes it harder to keep tabs on Comic Con’s celebrity guests. As it gets later on Saturday night, Comic Con goers migrate downtown, and many out-of-towners leave, since Sunday is “kids day” at Comic Con. Adults who’ve had their fill of the convention tend to skip it. Lots of attendees have flocked to Barcade on 24th Street and 7th Ave at this point, but in the tight space lit by '80s arcade games, it’s hard to tell who came from Comic Con and who didn’t — but not impossible. One man shoulders a Captain America shield and others still wear their Comic Con passes on lanyards around their necks.

Alex, aka Judge Dredd, is at the bar ordering beers for his friends. He’s finally found the ideal Comic Con after party.