There's a way for progressive Democrats to go after Feinstein without giving in to sexist, ageist impulses 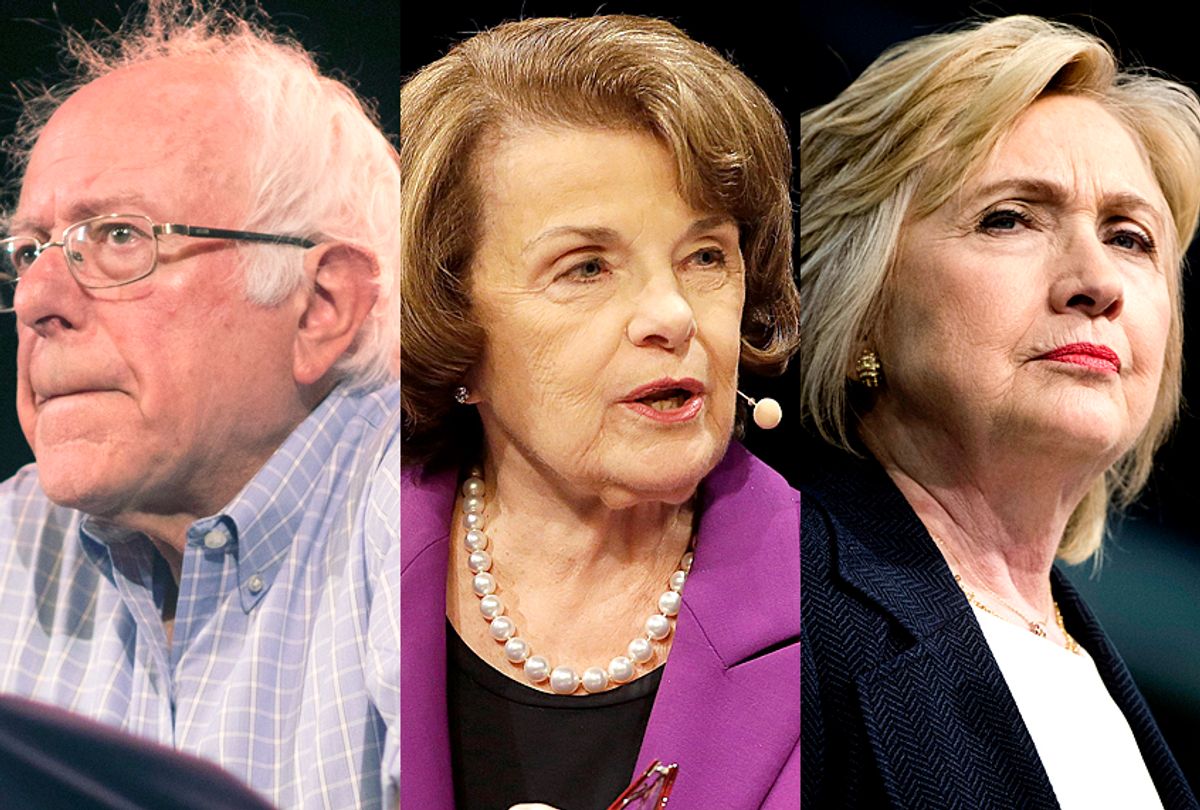 Sen. Dianne Feinstein of California has just announced that she plans to run for re-election to the Senate next year, hoping to hold onto a seat she has held since 1992.

In reporting her decision on Monday, the Associated Press included that Feinstein is the “oldest senator at 84” in its headline and noted that she “is at an age when many Americans are deep into their retirement years” in its first sentence. The wire service went on to mention that “questions about her age circulated in 2012,” adding that “she had a pacemaker installed in January.”

Utah’s Orrin Hatch is less than a full year younger than Feinstein, yet I somehow doubt his likely re-election announcement ahead of the 2018 midterms will be followed by coverage centered on his age. The legendary Sen. Strom Thurmond of South Carolina didn’t retire until he was 100 years old.

Feinstein should run for re-election -- and she should be challenged from the left. Half of likely California voters said Feinstein should not seek a sixth term, according to a poll released late last month. That likely reflects the way the state has changed during her years in politics; a centrist, hawkish Democrat is no longer a perfect fit for California, a deep blue state.

Hillary Clinton carried the state in November by a margin of 3.4 million votes, which was more than her overall national advantage. So Donald Trump's claim that he won the popular vote would be true, if he could subtract California from the nation.

As the top Democrat on the Senate Judiciary Committee, Feinstein did little or nothing to resist Trump’s most significant accomplishment thus far: Supreme Court Justice Neil Gorsuch. The day before she announced her re-election bid, Feinstein sounded tone deaf on the issue of the moment, refusing to commit to returning contributions she might have received from disgraced Hollywood mogul Harvey Weinstein.

"I don't know that I've received any. I'll certainly take a look, and then I'll make a decision," Feinstein said on “Meet the Press,” after decades' worth of sexual harassment complaints against Weinstein emerged.

Feinstein shouldn't get a free ride here. She may well face a challenge from the Democratic left flank, largely on the theory that safe Democratic seats -- and California's are the safest -- should be reserved for those who represent the base. Feinstein no longer does. When California’s other veteran female senator, Barbara Boxer, retired in 2015, her exit allowed for the election of the state’s first Asian-American and African-American senator, Kamala Harris. While Harris is herself a controversial figure to many progressives, she is still inarguably representative of the base of her party in the state -- women of color. Harris' immediate endorsement of Feinstein's re-election bid felt to many like short-order betrayal of the activist spirit that swept the younger senator into the national spotlight.

Freshman Rep. Ro Khanna, a Democrat who represents San Jose and other parts of Silicon Valley, said on Monday that while he has no plans to challenge Feinstein, he thinks she’s "out of touch with the grassroots of our party.”

Khanna, the vice chair of the Congressional Progressive Caucus, told Vox that “the fact that the establishment is rallying around her re-election shows that DC insiders continue to privilege and protect one of their own over the voters' concerns." He continued his critique of Feinstein in another interview with Politico on Monday:

[T]he Silicon Valley Democrat said that while Californians can respect Feinstein’s “lifetime of public service,” she does not represent progressive grassroots on key issues that include privacy, “Medicare for All,” and the new innovation economy.

“She was totally out of touch when the whole debate happened on encryption,’’ that occurred between Apple and law enforcement officials in the wake of the San Bernardino terrorist massacre, he said. “She didn’t even understand some of those issues."

“And most recently, she has not embraced a move toward 'Medicare for All,’ and bold economic policies,’’ he said.

Notice that? No mention of her age. Sure, if Feinstein wins re-election she will be 91 at the end of her next term. But pointing to her age is just a lazy way to express concern for her apparent lack of connection to many of today’s top issues and modes of communication.

Khanna's critique provides a script for progressive Feinstein opponents to follow, while the contentious and seemingly endless 2016 primary battle between Bernie Sanders and Hillary Clinton provides a roadmap full of pitfalls Democrats would do well to avoid.

Khanna was a fierce supporter of Sanders’ presidential campaign, but his criticism of Feinstein shouldn’t be interpreted as thinly-veiled attempts to go after a powerful woman in leadership. He remains supportive of Nancy Pelosi’s role as the leader of Democrats in the House. Khanna's critique of Feinstein is simply substantive. That's it.

Democrats may well feel shell-shocked by the bruising oppression Olympics pitting sexism against ageism (and completely ignoring any notion of intersectionality) that was the 2016 primary campaign. Instead, the post-election conversation on the left has been dominated by debates about whether Sanders will be too old to run again in 2020 and whether Clinton should ever be permitted to speak again after the grave sin of losing an election. It’s been a silly and exhausting exercise in re-litigating the past that feels like a setup for future failure. So go ahead, Golden State progressives, challenge Dianne Feinstein -- and take her down if you can. Just don't sabotage your own credibility in the process.