Will anyone be kneeling Sunday? NFL commissioner moves to make every player stand

Seems Trump has carried the day 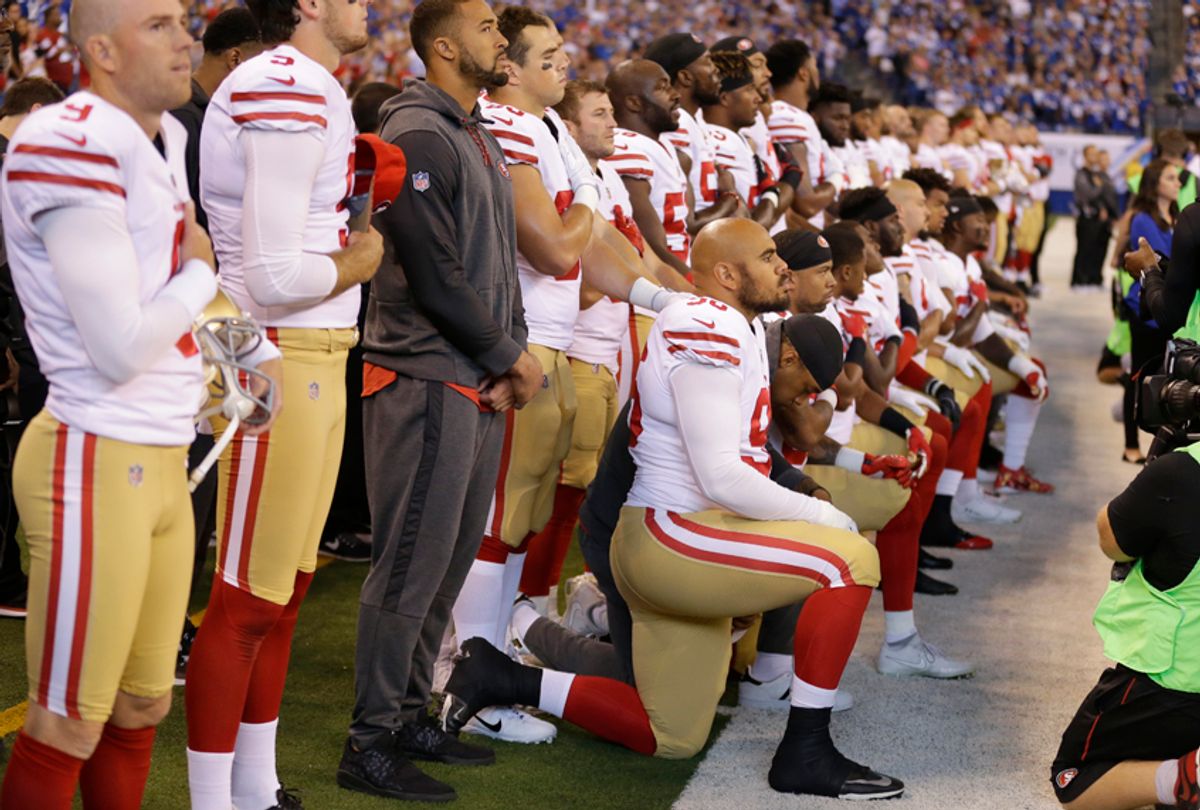 Member of the San Francisco 49ers kneel during the playing of the national anthem before an NFL football game against the Indianapolis Colts, Sunday, Oct. 8, 2017, in Indianapolis. (AP/Michael Conroy)
--

On Tuesday NFL Commissioner Roger Goodell said in a letter that while the league respects the individual rights of players, he believes everyone should stand for the national anthem, and that he would be meeting with team owners next week to discuss a plan moving forward.

"Like many of our fans, we believe that everyone should stand for the national anthem," the letter to NFL chief executives and club presidents said. "It is an important moment in our game. We want to honor our flag and our country, and our fans expect that of us. We also care deeply about our players and respect their opinions and concerns about critical social issues. The controversy over the anthem is a barrier to having honest conversations and making real progress on the underlying issues. We need to move past this controversy, and we want to do that together with our players.

But Goodell also said that the plan moving forward would allow "an in-season platform to promote the work of players" on social issues, "and that will help to promote positive change in our country."

JUST IN: In letter to NFL owners, Roger Goodell says: "We believe that everyone should stand for the National Anthem." pic.twitter.com/iveGOQgJnz

The news comes just days after Dallas Cowboys owner Jerry Jones said he would bench any player that disrespected the flag, which honored the words of President Donald Trump who has repeatedly concerned himself with the inner workings of the NFL and said that any player who didn't stand should be fired.

It's unclear what conclusion the NFL and its owners will come to following their meeting next week, however, the league has already quietly issued a subtle change to its policy on standing for the national anthem, as Deadspin reported.

The policy — not a rule — stems from the game operations manual, formally known as the "Policy Manual for Member Clubs." Who reminded Jones of the manual? None other than Trump himself.

Jones emphasized NFL game ops manual several times and then this: "You know who reminded me about the game ops policy? Donald Trump."

"Indeed, the only current portion of the document publicly available is the short anthem-related portion the league has been feeding to various sources for several weeks," Deadspin reported.

But here's the catch: the policy was worded differently as recent as 2014. The entire game operations manual was made available through court records during the Tom Brady scandal over his possible knowledge of deflated footballs.

The 2014 policy reads that failure to be on the field by the start of the national anthem may “result in disciplinary action from the League office.” The version currently being promulgated by the NFL revises this to read “result in discipline, such as fines, suspensions, and/or the forfeiture of draft choice(s) for violation of the above, including first offenses.” That’s a pretty big change for two reasons: They’ve added a lot of punishment, and they’ve removed the language that punishment would come from the league office. We don’t know when the change was made; its language did not appear on the web at all until two weeks ago, and questions sent to an NFL spokesperson have yet to be answered.

Whether the NFL can actually punish players for refusing to stand during the national anthem remains to be seen, but there are speculations on what that would look like, and what could happen. The NFL is known as a private employer, meaning protections on speech are vastly restricted and could result in an employer taking action.

The NFL receives plenty of public funding, specifically taxpayer funds for new stadiums, as well as copious exemptions. As The Root noted, "Couple this with the substantial tax breaks the NFL receives due its laughable non-profit designation it’s not unfathomable that some NFL teams," could be considered "public actors."

At this time, not many players have made statements about the developments, but NFL player Martellus Bennett, brother of NFL player Michael Bennett, made his feelings known.

"@nflcommish really bruh? It's hard trying to play both sides of the fence when it comes down to injustice and your money huh?"

@nflcommish really bruh? It's hard trying to play both sides of the fence when it comes down to injustice and your money huh?

There will likely still be players who kneel in protest on Sunday, however, it's still unclear when or if the league will do something about it.