Four dead Americans in Africa: Why hasn't this act of terror drawn the same feverish scrutiny? 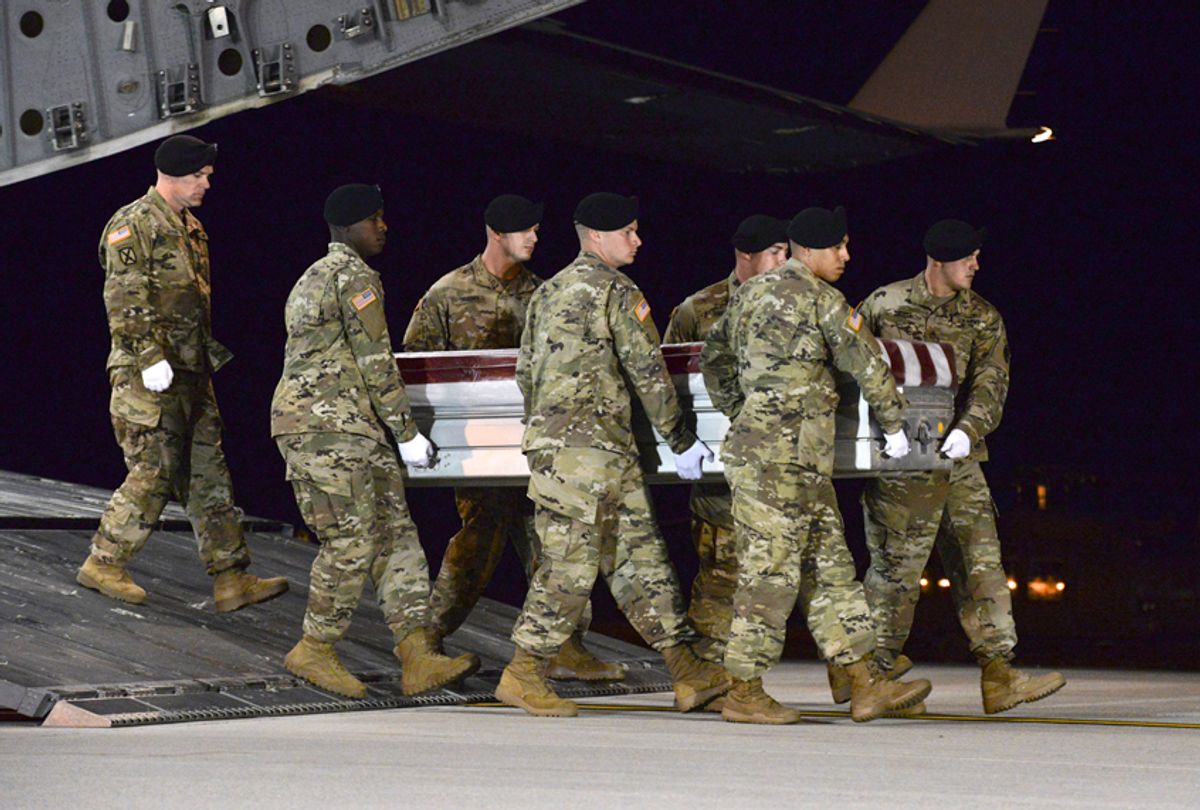 It’s been five years since terrorists attacked the U.S. consulate in Benghazi, Libya, on Sept. 11, 2012, leaving four Americans dead. Last week, as CIA officers disguised in wigs and mustaches testified in court about the predawn ambush on the diplomatic compound, four other American soldiers were killed in neighboring Niger.

Most Americans may not even be aware that approximately 800 U.S. troops are stationed in Niger, a West African nation where jihadist groups have taken root. As part of the never-ending war on terror, the United States has also set up a drone base in Niger’s capital city of Niamey. Contrary to his focused commitment to reverse every policy put in place by his predecessor, President Donald Trump has decided to carry on with the construction of a second drone base in Niger commissioned by Barack Obama.

American forces have never been sanctioned to an official combat mission in Niger, a landlocked West African nation about twice the size of Texas with a population of just over 20 million people. But they have long been fighting against Islamic extremists in the country and surrounding region. On Oct. 4, four Green Berets were killed and two more injured after their group of a dozen U.S. soldiers were ambushed while conducting a joint patrol with about 40 Nigerien soldiers.

The New York Times reported that when the soldiers were ambushed, no American helicopters came to their rescue. Although Congress has never authorized the mission in Niger -- as is required by the Constitution -- the military’s Africa command asked lawmakers for more help months before the attack, the Times also reported.

It remains unclear which terror group carried out the ambush, but there are reports that a new wing of the Islamic State that calls itself the Islamic State in Greater Sahara (ISIS-GS) had a hand in the deaths of the Special Forces troops -- the first U.S. casualties in Niger.

Identified as Staff Sgt. Bryan Black of Washington state, Staff Sgt. Jeremiah Johnson of Ohio, Sgt. La David Johnson of Florida and Staff Sgt. Dustin Wright of Georgia, the four dead Americans, part of the Third Special Forces Group based at North Carolina’s Fort Bragg, haven’t received much attention. The White House said Trump was notified about the attack in Niger shortly after it happened last Wednesday night. A week later, he still hasn’t sent one tweet or released any official statement about the death of the four Americans. He has written more than 60 tweets about Benghazi, another terror attack in the same region of Africa that resulted in four dead Americans.

The White House has remained curiously mum about this terror attack, exactly the sort of event it would normally use to score political points. Even though he sent Vice President Mike Pence to Indiana -- at great taxpayer expense -- to showboat over the flag at an NFL game on Sunday, Trump couldn’t be bothered to head to Dover Air Force Base to greet the flag-draped coffin of one of the soldiers he claims to honor, on Monday. Instead, the president was busy playing golf with Sen. Lindsey Graham.

Recall how much was made of President Obama’s round of golf after stopping to address the beheading of American James Foley by ISIS? Or the hours of cable news coverage devoted to then-Secretary of State Hillary Clinton’s supposedly disingenuous statement to the grieving families three days after the Benghazi attack?

Republicans were quick to accuse the Obama administration of crafting a faulty political narrative in the aftermath of Benghazi. Fox News told its viewers for years that Obama may have "sacrificed Americans" as part of a "political calculation" to win re-election.

Now that such an attack has happened on Trump’s watch, where are the specious accusations of a stand-down order?

Kris “Tanto” Paronto, one of the surviving U.S. security contractors who were on the ground in Benghazi during the terrorist attack, slammed Clinton for lacking a “sense of urgency.” Just one week before the Niger ambush, Paronto suggested in a tweet that Clinton failed to stop the attack because she didn’t consider the consulate staff American:

Wish u had that sense of urgency while u were watching the ISR feed during our 5th firefight in B-ghazi 😑or did u not consider us Americans? https://t.co/Fb0BlftP1J

Noting that U.S. ambassador Chris Stevens, a personal friend of Clinton’s, was among the victims, Trump said in a June 2016 speech: “What she did with him was absolutely horrible. He was left helpless to die as Hillary Clinton soundly slept in her bed.”

Trump has remained so silent on Niger that Breitbart News was successfully duped over the weekend by a parody account that tweeted presidential condolences. The sadly remarkable truth that the Trump-loving conservative media is burying is that these soldiers’ commanding officers have made statements -- but their commander-in-chief has not.

While it was immediately apparent that conservative outrage over the Benghazi attack was rooted in politics, we now know that much of its reaction was also a projection of what they would have done in power. The response to the ambush in Niger makes clear that Benghazi was never about embassy security, just as the revelation that both Jared Kushner and Ivanka Trump have used personal emails while in the White House showed that conservative outrage over Hillary Clinton's emails was never about secure government communications.

Not one prominent figure in the Republican Party would dare suggest that Trump’s neglect of the ambush serves to further a political narrative -- one that claims ISIS’ reign of terror is in decline on his watch.

Following the ambush in Niger, Fox News has failed to mention the infamous terror group in its few on-air reports of the four dead Americans. Instead, the conservative cable news network reported on Monday that U.S. troops were on the verge of successfully running ISIS out of Iraq. On Tuesday, Fox News host Greg Gutfeld delivered a monologue demanding that Trump be given the credit.

Bombing the crap out of them, killing everyone they know -- it seems to work. Who would have thought? Oh, yeah, President Trump. It's something for which he gets no credit. He's literally ending ISIS . . . So laugh all you want about the tired phrase, "There's a new sheriff in town." I think ISIS got that message. And while we have to careful of the "mission accomplished" syndrome, what is undeniable is that ISIS is off the front pages and on their last legs.

Behold the mythmaking in action

Fox News producers no doubt know that Niger could be Trump’s Benghazi, because they created the media and political spectacle of Benghazi out of nearly nothing. While the president has kept his detractors distracted with petty drama, Fox is helping him sweep a real scandal under the rug.