What it’s like to be gay and in a gang 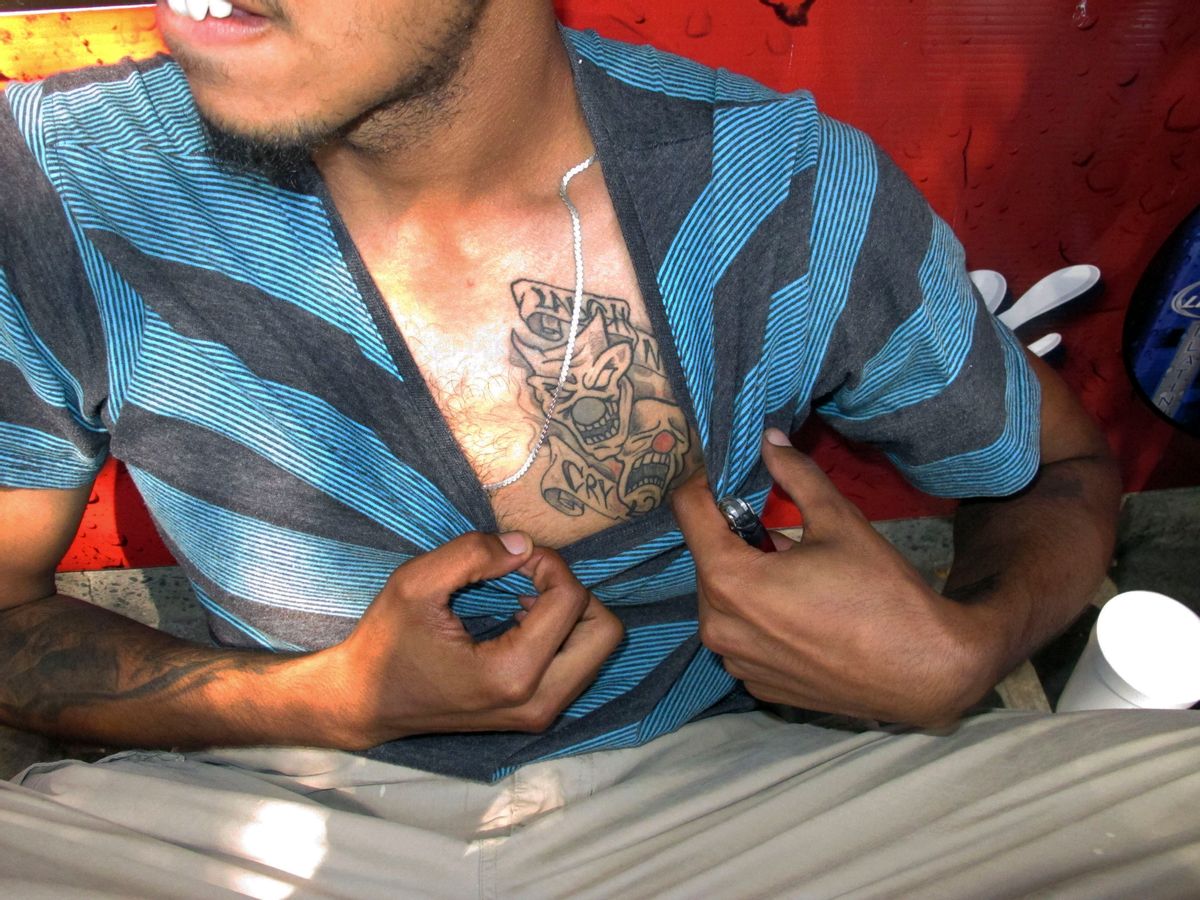 In this Sept. 5, 2014 photo, a reputed member of the Los Solidos street gang shows his tattoo to police in Hartford, Conn. ((AP Photo/Dave Collins))
--

In movies and television, some of the most recognizable gay characters have been portrayed as effeminate or weak; they’re “fashionistas” or “gay best friends.” Street gang members, on the other hand, are often depicted as hypermasculine, heterosexual and tough.

This obvious contradiction was one of the main reasons I was drawn to the subject of gay gang members.

For my new book “The Gang’s All Queer,” I interviewed and spent time with 48 gay or bisexual male gang members. All were between the ages of 18 and 28; the majority were men of color; and all lived in or near Columbus, Ohio, which has been referred to as a “Midwestern gay mecca.”

The experience, which took place over the course of more than two years, allowed me to explore the tensions they felt between gang life and gay manhood.

Some of the gang members were in gangs made up of primarily gay, lesbian or bisexual people. Others were the only gay man (or one of a few) in an otherwise “straight” gang. Then there were what I call “hybrid” gangs, which featured a mix of straight, gay, lesbian and bisexual members, but with straight people still in the majority. Most of these gangs were primarily male.

Because even the idea of a gay man being in a gang flies in the face of conventional thought, the gang members I spoke with had to constantly resist or subvert a range of stereotypes and expectations.

Getting in by being out

Male spaces can be difficult for women to enter, whether it’s boardrooms, legislative bodies or locker rooms.

How could I — a white, middle-class woman with no prior gang involvement — gain access to these gangs in the first place?

It helped that the initial group of men whom I spoke to knew me from years earlier, when we became friends at a drop-in center for LGBTQ youth. They vouched for me to their friends. I was openly gay — part of the “family,” as some of them put it — and because I was a student conducting research for a book, they were confident that I stood a better chance of accurately representing them than any “straight novelist” or journalist.

But I also suspect that my own masculine presentation allowed them to feel more at ease; I speak directly, have very short hair and usually leave the house in plaid, slacks and Adidas shoes.

While my race and gender did make for some awkward interactions (some folks we encountered assumed I was a police officer or a business owner), with time I gained their trust, started getting introduced to more members and began to learn about how each type of gang presented its own set of challenges.

Pressure to act the part

The gay men in straight gangs I spoke with knew precisely what was expected of them: be willing to fight with rival gangs, demonstrate toughness, date or have sex with women and be financially independent.

Being effeminate was a nonstarter; they were all careful to present a uniformly masculine persona, lest they lose status and respect. Likewise, coming out was a huge risk. Being openly gay could threaten their status as well as their safety. Only a handful of them came out to their traditional gangs, and this sometimes resulted in serious consequences, such as being “bled out” of the gang (forced out through a fight).

Despite the dangers, some wanted to come out. But a number of fears held them back. Would their fellow gang members start to distrust them? What if the other members got preoccupied about being sexually approached? Would the status of the gang be compromised, with other gangs seeing them as “soft” for having openly gay guys in it?

So most stayed in the closet, continuing to project heterosexuality, while discreetly meeting other gay men in underground gay scenes or over the internet.

As one man told me, he was glad cellphones had been invented because he could keep his private sexual life with men just that: private.

One particularly striking story came from a member of a straight gang who made a date for sex over the internet, only to discover that it was two fellow gang members who had arranged the date with him. He hadn’t known the others were gay, and they didn’t know about him, either.

In “hybrid” gangs (those with a sizable minority of gay, lesbian or bisexual people) or all-gay gangs, the men I interviewed were held to many of the same standards. But they had more flexibility.

In the hybrid gangs, members felt far more comfortable coming out than those in purely straight gangs. In their words, they were able to be “the real me.”

Men in gay gangs were expected to be able to build a public reputation as a gay man — what they called becoming “known.” Being “known” means you’re able to achieve many masculine ideals — making money, being taken seriously, gaining status, looking good — but as an openly gay man.

It was also more acceptable for them to project femininity, whether it was making flamboyant gestures, using effeminate mannerisms, or wearing certain styles of clothing, like skinny jeans.

They were still in a gang. This meant they needed to clash with rival gay crews, so they valued toughness and fighting prowess.

Men in gay gangs especially expressed genuine and heartfelt connections to their fellow gang members. They didn’t just think of them as associates. These were their friends, their chosen families — their pillars of emotional support.

But sometimes these gang members would vacillate about certain expectations.

They questioned if being tough or eager to fight constituted what it should mean to be a man. Although they viewed these norms with a critical eye, across the board they tended to prefer having “masculine” men as sexual partners or friends. Some would also patrol each other’s masculinity, insulting other gay men who were flamboyant or feminine.

Caught between not wanting themselves or others to be pressured to act masculine all the time, but also not wanting to be read as visibly gay or weak (which could invite challenges), resistance to being seen as a “punk” or a pushover was critical.

It all seemed to come from a desire to upend damaging cultural stereotypes of gay men as weak, of black men as “deadbeats” and offenders, and of gang members as violent thugs.

But this created its own tricky terrain. In order to not be financial deadbeats, they resorted to sometimes selling drugs or sex; in order to not be seen as weak, they sometimes fought back, perhaps getting hurt in the process. Their social worlds and definitions of acceptable identity were constantly changing and being challenged.

One of the most compelling findings of my study was what happened when these gay gang members were derisively called “fag” or “faggot” by straight men in bars, on buses, in schools or on the streets. Many responded with their fists.

Some fought back even if they weren’t openly gay. Sure, the slur was explicitly meant to attack their masculinity and sexuality in ways they didn’t appreciate. But it was important to them to be able to construct an identity as a man who wasn’t going to be messed with — a man who also happened to be gay.

Their responses were revealing: “I will fight you like I’m straight”; “I’m gonna show you what this faggot can do.” They were also willing to defend others derided as “fags” in public, even though this could signal that they were gay themselves.

These comebacks challenge many of the assumptions made about gay men — that they lack nerve, that they’re unwilling to physically fight.

It also communicated a belief that was clearly nonnegotiable: a fundamental right to not be bothered simply for being gay.