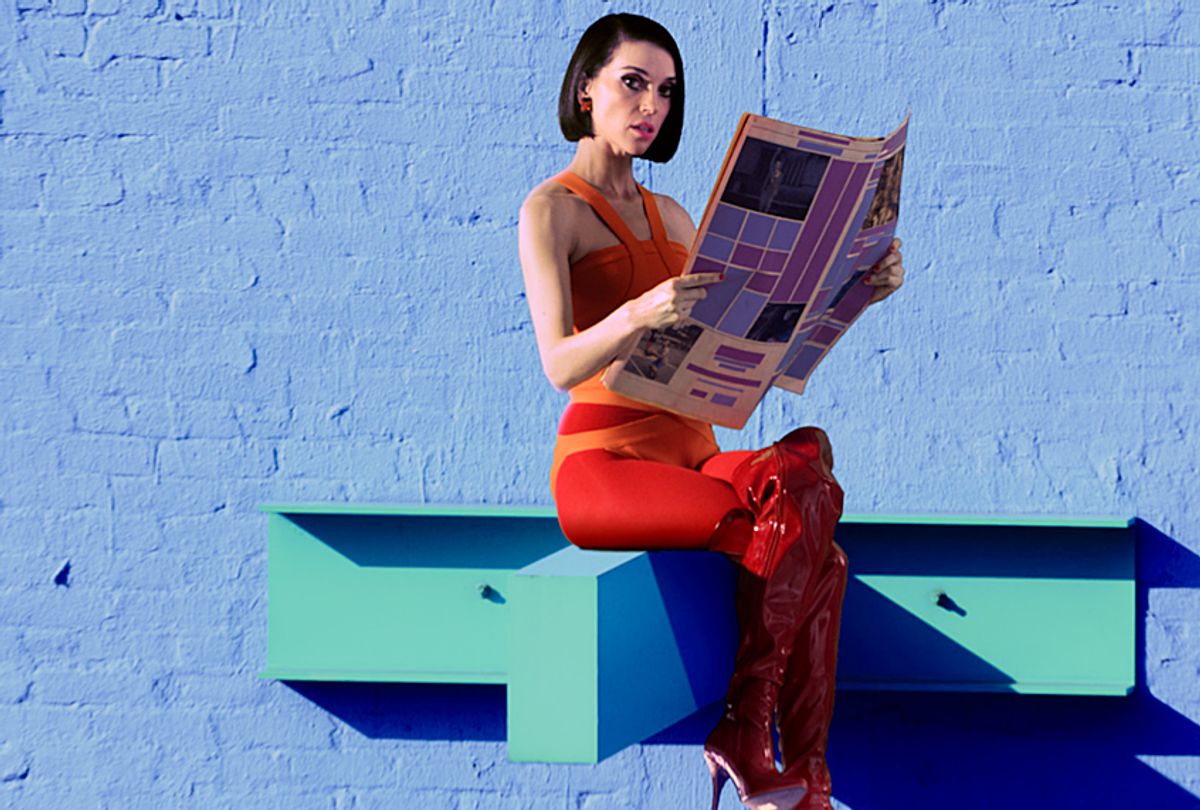 “Don’t judge a book by its cover” was always bad advice. Futile, for one thing. Reductive, for another. And misguided to top it all off. A book’s cover is part of a book — not the only part, but a part nonetheless — and not factoring that initial image into a judgement of the book is like not factoring in the first line, paragraph or page of the book. Imagine being told not to judge “Moby Dick” or “A Tale of Two Cities” by their first lines. You’d say, “You mean don’t judge those books by just their first lines?” And, yeah, same goes for covers.

Albums covers, too. An album cover is not the music, but it’s not nothing. Take for instance the cover of the new St. Vincent album, “Masseduction.” A woman who we might assume to be St. Vincent (Annie Clark) is wearing a leopard-skin onesie, hot pink tights and glossy ruby pumps that might just take her back to the ‘80s if she clicks her heels together three times and repeats, “I want my MTV. I want my MTV. I want my MTV.” Her head isn’t visible because she’s bent over with her back to the camera and her legs perfectly straight. Behind her is a pure red backdrop that is probably computer-generated but also might just be the space between two zips in Barnett Newman’s “Vir Heroicus Sublimis.”

Like with Newman’s painting, if you stare at the cover of “Masseduction” close enough for long enough the image transcends what your brain knows it to be. Are those legs? Are they connected? What is red? Those were my initial thoughts when I studied it. And then I thought about an interview a friend conducted with the photographer Greg Hazel. Hazel takes these almost-absurd self-portraits where he’s doing things like climbing into a washing machine, lying on the floor of a tool shed, slithering through doorways, all with his body exposed and his face hidden. In the interview, he talks about how he often frames his photos the way he does because he feels uncomfortable giving away too much. “The upper lip is really personal, but I don’t really think my gooch is that personal,” he said.

I suspect Annie Clark feels similarly. Prior to “Masseduction,” she released four solo albums and a collaborative album with David Byrne. Her face is on the cover of four of those five albums (the exception being 2011’s “Strange Mercy”). And there’s a progression within the covers that mirrors her artistic evolution. On the cover of her debut, 2007’s “Marry Me,” she is shot from the chest up in front of a light gray backdrop, wearing a gray blouse. She is looking directly into the camera, her mouth slightly agape and her dark, curly hair falling where it will. On the next album, there is color and her gaze moves into the distance, like an at-attention soldier. By “Love This Giant,” her 2012 collaboration with David Byrne, her face is distorted so that it looks as though her right jaw is rippling away. And on her last album, 2014’s “St. Vincent,” she is an electric empress: her hair is dyed white and purple, she is wearing a long sparkling gown and she is sitting atop a chalky pink throne.

Looked at together, you can see Annie Clark become St. Vincent. You can see her become more confident in the character she inhabits. It’s an evolution from wide-eyed ingenue to laser-eyed dominatrix. And the evolution is not just in appearance. On her first album, she sang over virtual nursery melodies, with childlike voices providing choruses on songs like “Now, Now” and “Your Lips Are Red.” On this album, she is in forceful command. Verses include “You put me in a teacher’s little denim skirt/ Ruler and desk so I can make it hurt” (on “Savior”) and “I can’t turn off what turns me on/ I hold you like a weapon/ I don’t turn off what turns me on” (on “Masseduction”).

Outside of the album, in real interviews and conceptual Instagram interviews, St. Vincent has created a plastic pop world full of chromatic colors and dry sarcasm. The act is a way to satirize the lifeless monotony of being a pop star, life on the internet and the unthinking misogyny latent in questions asked of female artists.

But the costumes and conceptual videos also serve as a shield. “Masseduction” is, by St. Vincent’s own admission, her most personal album. She sings barely veiled songs about her break-up with the model and actress Cara Delevingne (“Young lover, I wish that I was your drug/ Young lover, I miss the taste of your tongue,” on “Young Lover”). She sings about self-medicating (“Pills to wake, pills to sleep/ Pills, pills, pills every day of the week,” on “Pills”). And she sings about death — about loss of loved ones, suicidal thoughts and plain impermanence.

All of which is not to say that “Masseduction” is a 40-minute dirge. St. Vincent is still St. Vincent and not Adele or Sam Smith. There are a few tender ballads on this album (“New York,” “Slow Disco” and “Smoking Section”) but they’re arrived at after hopping arcade beats, manic choruses and waves of blissed-out exultance.

On “Masseduction,” St. Vincent is moving closer to pop from where she stood in rock’s left field, but her arrangements remain intricate, and she frequently juxtaposes bright hooks with macabre lyrics. Also, to these ears, there remains no more inventive guitar player strumming today. “Fear the Future,” a woozy, rocking, end-of-days search-plea, sounds like mainlining adrenaline. Who needs pills?

The album is 13 songs long and it is tight, packed with enormous punch — of both the gut and heart. Production credit is shared between St. Vincent and Jack Antonoff. Antonoff is the producer of the moment, and though he clearly had a hand in helping St. Vincent reach a new peak of sonic sublimity, his hand can be heavy. The power-pop anthem “Sugarboy” is what it sounds like when a singular voice meets an omnipresent sound. The track uses ‘80s-inspired call-and-response choruses (“I am a lot like you (boys)/ I am alone like you (girls)”) that make it sound too much like Lorde’s single, “Greenlight,” as well as other Antonoff-produced pop tracks from artists like Pink and Taylor Swift.

“Sugarboy” does pulse, though. And the way it recalls other pop hits rather than future pop hits provides another function: It is a rare reminder that St. Vincent is fallible. That fact, admittedly, couldn’t be gleaned from the mannequinesque body and solid backdrop pictured on the cover of “Masseduction.” Beneath that retro plastic artifice is the fear of that which we cannot curate. And beyond it is one of the best albums of the year.