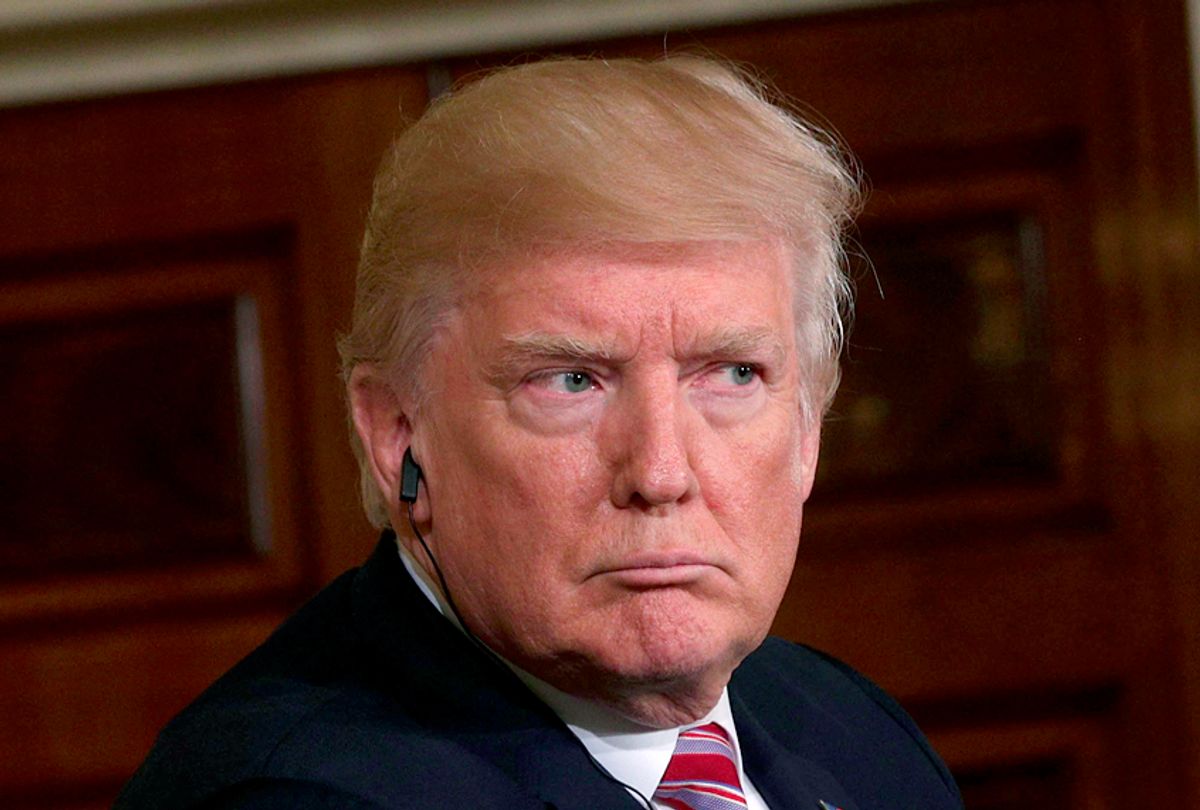 President Trump’s executive order Thursday to sabotage the Affordable Care Act — aka Obamacare — is crossing a new legal threshold that could become part of a growing list of ultimately impeachable actions, much like Richard Nixon faced a deepening list of offenses before he resigned from office in 1974.

That’s because Trump’s willful destruction of Obamacare, a law passed by the Congress — not a regulation promulgated by federal departments — would violate his oath to uphold the Constitution, whose Article Two demands that the president “take care that the laws be faithfully executed.”

“Trying to destroy the law through non-enforcement isn’t just a normal exercise of presidential discretion,” Noah Feldman, Harvard Law School professor and legal columnist, wrote this summer for Bloomberg.com, anticipating Trump’s actions and discussing the Constitution's “Take Care” clause. “The Constitution recognizes that the president can’t necessarily enforce every law. But it requires a good-faith effort. And declining to enforce the law so that the law itself ceases to be able to function isn’t good faith.”

What’s new and different about Trump’s presidency at this time is his actions — and his threats tied to governmental actions — which are clashing with different constitutional duties and rights he has sworn to uphold. These are being noticed by legal scholars like Feldman, members of Congress, political insiders, and pundits on the right and left.

Seen in isolation, Trump’s anti-constitutional actions — attacking the press and free expression (the First Amendment), taking the military into Syria without congressional approval (Article One, Section 8), profiting from foreign governments’ use of his properties (Article One, Section 9), and abusing his pardon powers (Article Two) by pardoning white nationalist Joe Arpaio — don't seem to add up to much. But collectively, they are triggering and crossing constitutional thresholds in a manner that has little precedent.

Democrats wanted to impeach President George W. Bush over his war of choice in Iraq. Republicans wanted to impeach President Barack Obama over his use of executive orders in response to congressional inaction. But never before has the president trounced so many constitutional strictures. Trump’s tenure is pushing America into a mounting constitutional crisis that breaks with the past and even triggers the impeachment thresholds set by conservatives.

“There needs to be profound abuses of power that demonstrate unfitness for the president’s public trust,” wrote Jane Chong in a myths-about-impeachment piece for lawfareblog.com, where she is the deputy managing editor. Chong is also a National Security and Law Associate at the Hoover Institution, a conservative think tank.

It’s instructive to see how the right — not progressives — views impeachment and Trump’s trouncing of fundamental duties and rights. Unfitness for public trust, as Chong notes, is a value judgment based on an accumulated record. Much the same threshold was cited in an impeachment-rejecting piece by Gene Healy for the libertarian Cato Institute after Trump fired FBI Director James Comey. (Trump's critics said that move was an impeachable offense for obstructing the FBI investigation into his 2016 campaign and Russia.)

Quoting Joseph Story, who served on the Supreme Court from 1811 to 1845, Healy noted, “the [impeachment] remedy ‘is not so much designed to punish an offender, as to secure the state against gross official misdemeanors. It touches neither his person, nor his property; but simply divests him of his political capacity.’”

In other words, those on the right are concerned about presidential actions that impede a functioning government — to “secure the state.” That, of course, includes protecting constitutional rights. The question seems to be, how bad do Trump’s actions have to be before both parties say enough. The misdeeds have to severely break with historic normal partisanship, Chong noted.

“Partisanship be damned, our country enjoys a strong default against undoing national elections,” she wrote. “Only two presidents in our history have been impeached, and none has been successfully removed (though President Richard Nixon almost certainly would have been both impeached and convicted had he not resigned). To put that into numerical perspective, for a healthy 35 percent of our history, a U.S. president has coexisted with a House controlled by the opposing party (that’s 80 of the past 228 years since the start of the Washington administration). But only two presidents have suffered the disgrace of impeachment. Those two presidents, Andrew Johnson and Bill Clinton, were Democrats who were each ultimately acquitted by a Republican-controlled Senate.”

Trump doesn’t disappear into the normal partisan woodwork these conservatives are defending. Each month, and sometimes each week, his words and actions clash with the Constitution he’s sworn to uphold. The substance and stakes are rising — and that's been noted by liberals and conservatives alike.

How many examples do we need to cite? On Thursday, his executive order on Obamacare collided with the “Take Care” clause. (Obamacare defenders didn’t respond to requests for comment on whether they’d be filing suits on this basis.)

Days before, Trump's threat to take away the NFL’s tax-exempt status was “a clear violation of the First Amendment,” Harvard Law’s Feldman wrote. “It’s true that the NFL had voluntarily given up its tax break two years ago, which means that Trump’s threat wouldn’t have practical effect… [But] the First Amendment bars presidential bullying that includes a concrete threat to take government action against a private citizen or group in order to coerce speech.”

Trump’s pardon of Arizona Sheriff Joe Arpaio should be deemed constitutionally invalid, wrote Northwestern Law School professor Martin Redish in the New York Times (hours before it was announced), because it trashed the due process rights (Fifth Amendment) of Arpaio’s victims to seek redress.

Trump’s denial of Russian involvement in the 2016 campaign was “a deliberate deception or fraud” and therefore an impeachable offense, Bob Bauer, a lawyer with long ties to Democrats, wrote in Foreign Policy. “He is misrepresenting matters within his knowledge as president. Intelligence officials have briefed him on the Russia activities. He knows they are not a hoax. And his part in drafting the statement for Trump Jr. shows that he has been even more actively engaged in deceiving the public.”

The examples go on and on. Seen individually, in their respective silos, they all face grueling legal fights, since the White House will argue it has the power to do what it wants no matter what legal scholars and critics say. But even conservatives who say that Trump need not worry about impeachable offenses, as the National Review’s Andrew McCarthy argued in June, lay out the very standard that Trump is now broaching — especially as his statements embracing nuclear war with North Korea are escalating.

“Impeachable offenses — high crimes and misdemeanors — need not be indictable offenses,” McCarty wrote. “They need to be profound abuses of power that demonstrate unfitness for the president’s public trust.”

Trump’s attack on Obamacare Thursday, via executive orders, is one such abuse of power. His continuing flouting of the Constitution’s duties and rights are others. His embrace of war against North Korea and likely rejection of the U.S.-Iran nuclear arms pact — against his top generals’ advice — is another.

In 1974, Richard Nixon resigned instead of facing near-certain impeachment on a growing list of actions, including not funding a congressionally passed law, the Clean Water Act (like Trump’s Obamacare moves). What’s different today is the Republicans in Congress would have to agree to remove Trump through the available constitutional remedies.

While that likelihood seemed remote when Trump was sworn in last January, his escalating constitutional offenses, his mismanagement in office and his abuses of power are pushing the country toward a constitutional crisis, which principled conservatives say is grounds for removal. How this ends up is anybody’s guess, but with each passing week the stakes keep rising.