In most schools, gifted students with learning disabilities are left behind. Not here

One mother was sick of seeing her 2e sons struggle in ill-equipped schools. So she founded a school of her own 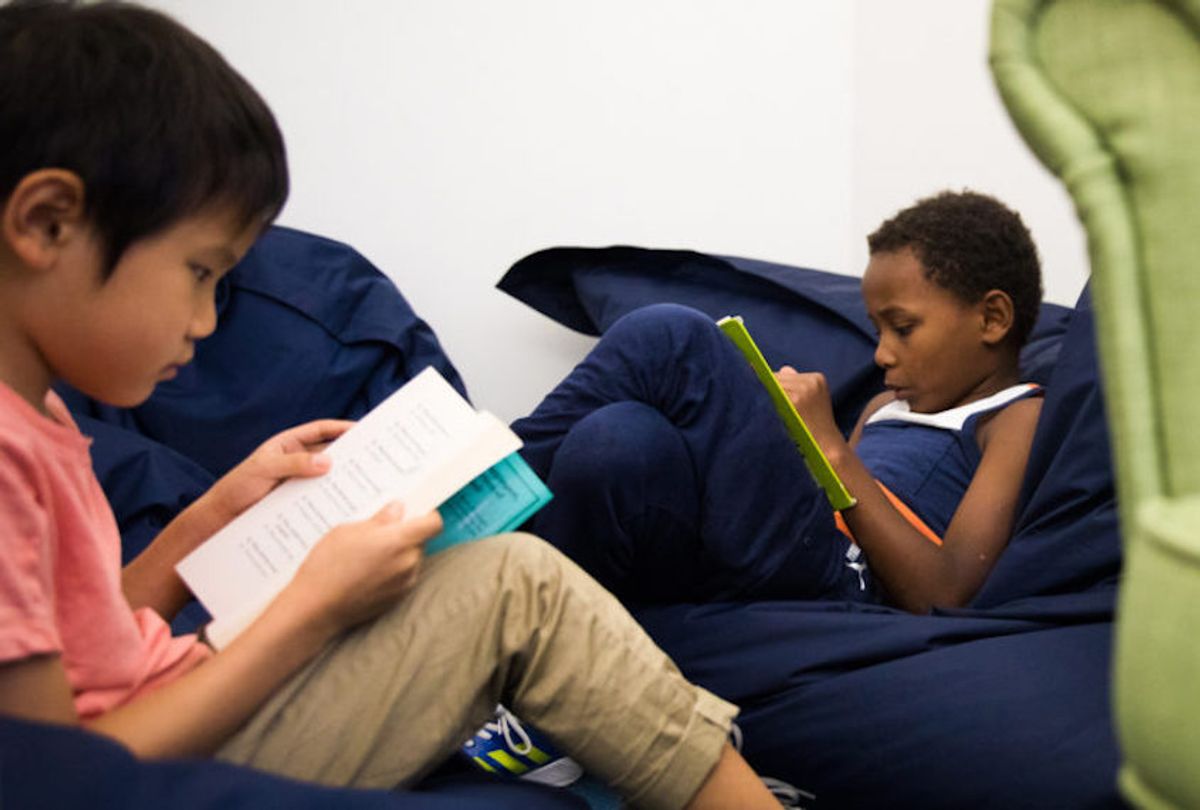 This article originally appeared on the Narratively.

A group of seven and eight-year-old kids cluster around tables, solving math problems designed for students five grades ahead of them. They’re asked to add and subtract different amounts of minutes from a specific time, and are timed on how fast they can solve the problems. “So, if it’s 10:15 a.m. and you move 450 minutes into the future, what time is it? Then move 105 minutes back. What time is it now? Go!”

A tiny whiz kid tackles these problems with ease, which thrills him. Standing at about three-foot-eleven, his leg is as wide as some adults’ wrists. Unable to sit still, the invitation to show off his strategy on the board in the front of the room is met with a leap and a sprint.

“What’s the difference between this time and this number? You’ve got to subtract the fifteen minutes from 10:15 and then write the rest out as an equation,” he explains proudly. “I’m so good at this now I can see the equation in the first second! If you guys want to get fast at doing this, this is what you’ve got to do. You’ve got to use this strategy!”

The kids in this class are not just exceptionally smart. They’re “twice exceptional,” or “2e,” a term that refers to students who are academically gifted and also have learning disabilities.

A co-teacher and a learning specialist accompany the head teacher in this classroom at the Lang School in Manhattan’s Financial District, an institution dedicated to twice exceptional kids. The learning specialist is consoling a girl in the corner who has been crying for over a half hour. This is a normal occurrence. She suffers from anxiety so debilitating she can’t function in a more conventional school.

Although the notion of being well above average in certain academic areas but an underperformer in others doesn’t seem too novel, twice exceptionality is rarely represented in academic literature. Compared to the amount of study and research devoted to special education and gifted education, twice exceptional education receives barely a peep. Many special and gifted education practitioners do not even know the term.

The federal government doesn’t track twice exceptionality, but, beginning in 2008, the state of Minnesota researched it during a five-year study of public primary school children. The study determined 14 percent of the gifted students studied were also learning-disabled. (The National Association for Gifted Children defines “gifted” children as having “outstanding levels of aptitude or competence in one or more domains” including math, music, language, painting, dance or sports.)

Some public-school students who are eligible for special education can have Individualized Education Programs (IEPs) developed, but many schools don’t have the resources to match twice exceptional students’ more complex requirements. Assistance may be needed for challenges with focus, organization, motivation, time management, anxiety, depression, motor skills, speech skills, memory, and socialization — as well as teaching designed for gifted students.

The Lang School was founded by Micaela Bracamonte, a 52-year-old mother who was concerned that her own twice exceptional children weren’t getting the attention and support they needed — and it’s one of just ten schools (all private) in the U.S. exclusively serving twice exceptional students.

Read more Narratively: The Veteran Saving His Comrades from Addiction By Embracing Their “Dysfunctional” Side

As a twice exceptional student herself, Bracamonte’s own academic life, growing up in Bethesda, Maryland, was one of frustration, rebelliousness and conflict, fueled by a lack of support for her twice exceptionality. She could speak three languages by first grade, but was held back because she couldn’t recall the alphabet in order. By third grade, she’d read many of her school’s textbooks, but was still not allowed to advance.

As the anger from being misunderstood and alienated mixed with intellectual boredom, year after year, Bracamonte began to detest social convention and authority. She turned to athletics, pouring 30 hours a week into gymnastics and track and field training, but with bitterness. When she was about to get first, second, or third place in a race — when there was something at stake — she would stop just short of the finish line and walk off the track.

“I wanted to make a point,” she says. “I wanted my coaches and school to know I didn’t care about them, or the medals, or the accolades.”

She believed school failed her, and that pain didn’t fade. Watching her children experience similar issues lit a fire in her.

Bracamonte’s older son, Julien, 18, began his academic career in public school, where his combination of ADHD and a high IQ forced his teachers to confront a challenge they were never trained to meet. Julien was always getting up and walking around the room, a thinking tool for him but a distraction for others in that particular environment.

“Sometimes I feel I need to move around,” Julien says. “I get how that can be disruptive but sometimes I need that.”

One year, his teacher placed a rocking chair in the back of the classroom and forced Julien to sit in it at all times. She dismissed him from school at noon every day, stating that he’d already absorbed the material anyway. It became clear “normal” school was just not a viable option for him.

Bracamonte’s younger son, Pascal, 13, was in public school for kindergarten, where the math and reading were much too simple for him, but he too has ADHD. He was enrolled at Lang by first grade.

“The math is actually hard for me now,” Pascal says, “which is good because I do really enjoy math. I studied trigonometry all of last year.”

In 2007, Bracamonte decided she’d had enough of watching her sons repeat the miserable experiences she’d had in public school, so she decided to start a new school that would cater to both their gifts and their challenges.

“I found myself spending so much time jerry-rigging my two twice exceptional kids’ educations that I created a school setting in the basement of our house, started inviting other kids into it, hired teachers, trained them, and started getting trained myself as a teacher,” Bracamonte explains. “I realized I was doing a damn good job at it, actually. So I started an official school.”

Bracamonte and her husband, Andreas Olsson, now Lang’s Director for Systems and Education, decided against having a third child or buying a house so they could personally finance the school’s creation. Bracamonte traded her career as a journalist for an obsession with creating the best twice exceptional school possible, crediting her journalistic inquiry — and severe ADHD — for her success.

After hiring an education attorney to assist with writing the school’s charter, applying for and receiving 501(c)(3) non-profit status, they found commercial real estate. The space had to meet legal guidelines for a school’s architecture, so the attorney recommended an architect to hire.

Bracamonte assembled a Board of Directors consisting of some of the Northeast’s most experienced twice exceptional experts, and hired the teachers who performed best in her home-school. She then called many child psychologists to pitch Lang as a resource for the appropriate patients. Exhausted, dejected parents of twice exceptional children were overjoyed.

“I couldn’t imagine what we would have done if Lang wasn’t an option,” Joel Brenner said, mother of Micah, nine, a fourth grader with Asperger syndrome who has been a Lang student since kindergarten. “They get him and have given him an incredible sense of ‘I can do this.’”

Lang’s tuition for twice exceptional students is $60,000 per school year, with roughly 40 percent of the student body receiving a reduced rate whereby the school is compensated the difference by New York City’s Department of Education.

Under Bracamonte’s direction, a key focus of the Lang School is to find a student’s strengths and build as much of their curriculum around them. The goal is for the student to capitalize on these strengths so they are capable of specializing in a certain area, but also to feel intrinsic motivation to cultivate more compensatory skills in other areas.

Bracamonte taught a screenwriting class with two students where one always struggled with writing. He was known among the teachers and students more for his quantitative skillsets.

“So all we did was write dialogue, because he’s a hell of a talker, and I scribed for him,” Bracamonte explains. “In an hour, we wrote a seven-minute screenplay. I’ve convinced this kid he’s a writer. His language use is magical. Step by step, I can see this kid doing this for a living. He just can’t figure out how to get it on paper on his own yet. Our job is to build that bridge.”

Lang became a lab to test out both tried-and-true and the latest research-driven methods in special education and gifted education. But Bracamonte didn’t have formal teaching credentials such as a degree in education (and still doesn’t) or prior teaching experience.

“I think I’m very lucky to not have education credentials.” Bracamonte says. “I don’t feel I’m lacking something. I’m actively avoiding them, because I don’t want to get locked into that mindset. You learn by doing, working tirelessly, self-reflection, asking questions and taking things to the next level. I’m open to risk, very comfortable with it and I tend to confront challenges head on.”

But while self-taught Bracamonte improvised with the structure and vision for the Lang School’s curriculum, pulling in new research from gifted, special and general education, some of her board members – mainstays in the twice exceptional educator community who have those education credentials Bracamonte says she can do without – wanted to stick with more time-tested methods.

Bracamonte is quick to point out that most on her staff are highly credentialed but, despite that, constructing an expertized school wasn’t her way. She continued developing an institution that was experimental compared to other twice exceptional schools, and tensions with those members of the board flared – they are no longer affiliated with Lang.

One former board member, who asked not to be identified because she did not want to jeopardize relationships in the community, said Bracamonte would not acknowledge consensus educational principles, and was overly distrustful of the rest of the twice exceptional community.

Bracamonte believes the twice exceptional community has an “old guard,” as she put it: “folks involved with other twice exceptional schools, folks on my original Board, folks who have an old-fashioned, not child-centric, not parent-centric, rather elitist view of education. So I feel our school is headed towards some new territory.”

She believes the twice exceptional model her school is building for its students is potentially paradigm shifting. By studying the New York City Department of Education’s data on test scores, gifted students and Individualized Education Programs, she estimates there are at least 50,000 twice exceptional students in New York City. This doesn’t count students unrecognized because of cultural, language or economic reasons. But she knows how hard it is to run a highly unconventional school that causes even some in her niche to be skeptical.

“I know the population is huge. I know the possibilities are great. I know the scale could be large. I will work hard and continue to work hard until I’m not working anymore. We’ll see where this goes.”