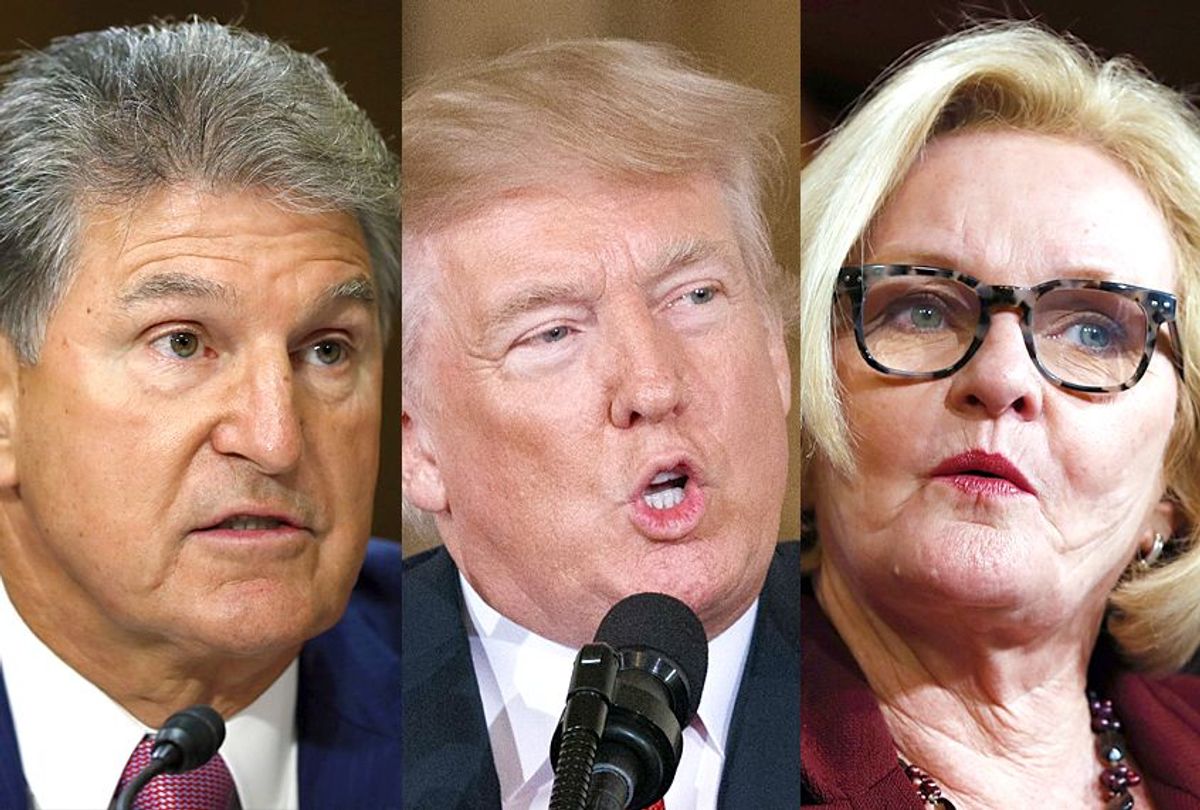 Donald Trump has a glaring blind spot with his base -- and two of the most vulnerable Democrats in the Senate just used it to go after him hard.

Opioid overdoses kill 91 Americans every day, according to federal data.

After declaring the nation’s drug problem a “national emergency” on the campaign trail, the president has failed to heed the suggestion of his own special commission to make that declaration official and to release crucial resources. Although the president finally nominated a “drug czar” to oversee the war against opioids in September, a blockbuster new report reveals just how culpable the Republican-led Congress -- and now potentially the Trump administration -- is in the proliferation of this massive public health crisis.

The number of opioid prescriptions in the U.S. has risen from 112 million in 1992 to 249 million in 2015. And since 1999, the rate of overdose deaths from opioids has more than quadrupled, according to the Centers for Disease Control and Prevention.

But even as opioid-related deaths continued to rise, the Drug Enforcement Administration failed to crackdown on the widespread distribution of drugs -- ignoring wholesalers in favor of targeting the doctors who write the prescriptions. The distributors serve as middlemen, sending billions of opioid pain pills to pharmacists, hospitals and nursing homes.

The DEA's public information officer for Ohio, Michigan and Kentucky, Special Agent Rich Isaacson, traveled to Wright State University last week to promote this DEA 360 Strategy. For the last decade, Isaacson told Ohio’s WYSO, “his agency has worked to develop a more ‘holistic approach’ to dealing with the opioid crisis.” Two days later, The Washington Post published their latest in a series of explosive reports detailing the successful takeover of the federal drug enforcement agency by the very industry it is supposed to police.

Along with CBS’ “60 Minutes,” the Post’s investigation found that "amid a targeted lobbying effort, Congress weakened the DEA's ability to go after drug distributors. Partially a function of what is known as the “revolving door” in Washington, D.C., after a successful stint of crackdowns that saw the shutdown of hundreds of pill mills across the nation, the DEA significantly slowed its efforts to stop the flow of prescription painkillers.

Republicans in Congress then further handcuffed the DEA.

Passed with bipartisan support but to little fanfare last year, legislation sponsored by two House Republicans -- both of whom are now up for prominent promotions -- effectively stripped the DEA of its most potent weapon against drug distributors.

The Ensuring Patient Access and Effective Drug Enforcement Act makes it more difficult for the DEA to temporarily suspend licenses of companies accused of failing to report suspicious orders of drugs. There are thousands of distributors among the 1.6 million people and companies that hold DEA licenses to dispense drugs, but three of them — McKesson, Amerisource­Bergen and Cardinal Health — account for 85 percent of the drug shipments, according to the Post. The 2016 law made it “virtually impossible for the DEA to freeze suspicious narcotic shipments from the companies,” the Post probe also found, citing internal Justice Department documents.

Donald Trump nominated the lawmaker most responsible for that legislation to head the White House’s Office of National Drug Control Policy, a position that requires Senate confirmation. Rep. Tom Marino, R-Pa., who was one of Trump’s early congressional backers, has been tapped to police an industry that donated $134,000 to his 2014 and 2016 re-election campaigns, according to campaign finance website Open Secrets. His former chief of staff left shortly after shepherding the legislation through Congress, to become vice president of the National Association of Chain Drug Stores.

Marino makes Trump vulnerable to political blowback on an issue of deep import to his base.

West Virginia Sen. Joe Manchin, up for re-election in 2018 in a state that went for Trump by more than 40 points over Hillary Clinton, was quick to take a swipe at the president’s choice for drug czar after the airing of the “60 Minutes” report on Sunday. West Virginia has the highest drug overdose death rate in the nation.

“The legislation that Congressman Marino pushed has tied the hands of the DEA in their efforts to enforce our nation’s laws and ensure that these wholesalers and other industry actors alert authorities to these suspicious orders instead of simply profiting from them,” Manchin wrote in a statement. “His advocacy for this legislation demonstrates that Congressman Marino either does not fully understand the scope and devastation of this epidemic or ties to industry overrode those concerns. Either option leaves him unfit to serve as the head of the ONDCP.”

The revelation of Marino’s role in deregulating drug enforcement in this country was so shocking that Trump offered a rare pledge to review -- all while remaining loyal to a man who has been loyal to him.

But it isn’t just Marino who may have future political ambitions caught up in the opioid epidemic.

Tennessee Republican Rep. Marsha Blackburn, now running to replace retiring Bob Corker in the Senate, was a co-sponsor of the 2016 law that weakened the DEA's ability to go after drug distributor.

Now Missouri Democratic Sen. Claire McCaskill, one of the most vulnerable Democrats in the Senate up for re-election in 2018, has seized on the growing scandal to call for a repeal of the 2016 law -- signed by President Barack Obama after little DEA pushback. Earlier this year, the House Energy and Commerce Committee started investigating the nation’s three largest drug wholesalers — McKesson, AmerisourceBergen and Cardinal Health.

"If there are any unintended consequences from this bipartisan legislation — which was passed unanimously by the House, Senate and was signed into law by President Obama — they should be addressed immediately," a spokesperson for Rep. Blackburn said on Monday.

Republicans and the Trump administration are left scrambling, and Democrats hoping to survive by picking off the president’s base would be smart to continue to draw attention to this growing scandal. After spending the entire year attempting to dismantle the Affordable Care Act, thereby slashing the budget of the biggest provider of opioid treatment in the country -- Medicaid, Trump has already cruelly targeted his own base. The nomination of Marino to drug czar only spits in that open wound.