Things we lost in the fire: No one talked about politics in Santa Rosa

Donald Trump played golf instead of visiting my devastated hometown. Good — we're doing fine without him 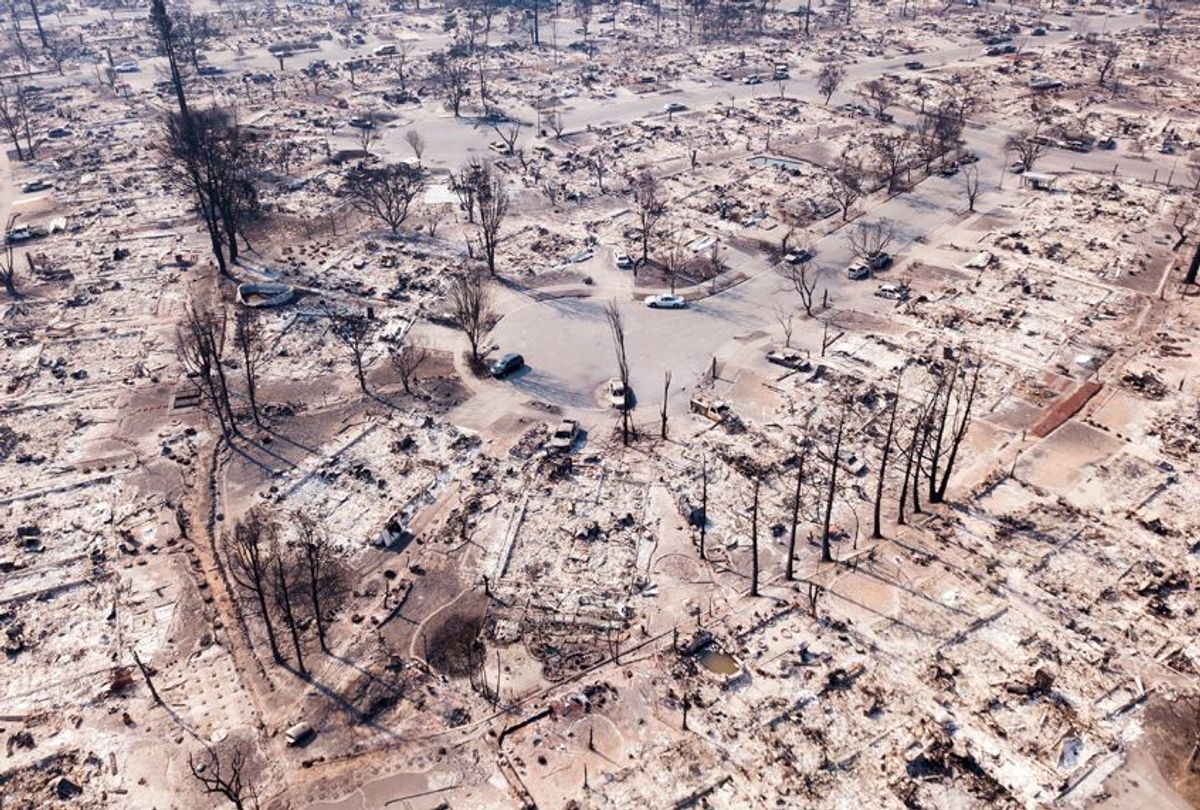 As I write this, there’s still smoke in the air. The inescapable stench of death and desolation in and around my adopted hometown of Santa Rosa, California will continue for some time, I suspect. Tens of thousands of acres have been destroyed, including homes, restaurants, businesses and so many of the lives that occupied those spaces.

It’s Sunday, exactly a week after this unnerving, unpredictable calamity began in the hills directly east of where I’m sitting. They say it was a downed PG&E power line that started the fire (Erin Brockovich is likely unsurprised), and it was the freak 75-mile-per-hour winds that carried the miles-wide battalion of fire downhill, through the middle-class neighborhoods of Fountaingrove and Larkfield, over the 101 freeway and into the Coffey Park area where, today, the formerly idyllic community better resembles the historic images of Hiroshima, post-Enola Gay. There’s nothing left in those subdivisions except flattened, blackened nothingness, annihilated by a firestorm that marched through Sonoma County like William Tecumseh Sherman marching through the South.

Since Monday morning, my apartment has remained precariously outside the mandatory evacuation zone, by less than a half mile. Had the wind been slightly less favorable, I might be in an evacuation shelter right now, emotionally preparing myself to return here for the dreaded sifting-through-the-ashes -- an experience I’d rather not repeat. I feel I paid my dues to fate in a house fire when I was nine years old, after having also barely escaped in my mom’s arms from a gas explosion when I was less than a year old. Suffice to say, rushing through my apartment deciding which possessions would be okay to burn, and which I’d like to hastily rescue in my “Go Bag” as the firestorm illuminated the sky outside is an experience I’ve endured before, and one I would be perfectly happy never to repeat.

Among many lessons learned throughout a week spent on perpetual alert, I learned that something like this can happen at any moment, without warning. Hurricanes can be predicted; earthquakes and volcanic eruptions can be forecast by geological science; hell, even certain terrorist attacks can be thwarted before the fact. But fires like this can easily occur with no heads-up. Fires that randomly ignite in the middle of nowhere can rapidly descend through the wilderness and into somewhere -- sizable human populations, in this case. When we went to bed Sunday night in this pleasant city of 175,000, an hour or so north of San Francisco, no one knew the mayhem that would ensue in the dead of night, a few hours later. We’re all nervously aware that we’re never truly safe.

I also learned that during the worst parts of a crisis of this enormity, politics vanished. I didn’t think it was possible in this dark age when Americans are more divided than at any point since 1861. As I maneuvered through the newly burned ghost towns and bumped into dozens of my neighbors, no one was talking about Donald Trump or Hillary Clinton or Bernie Sanders or whether it’s acceptable for professional football players and NBC News journalists to exercise their First Amendment rights. I didn’t hear anyone speculating about the climate crisis, even though climatologists will surely discover that it amplified the magnitude of these fires.

This is one of many reasons why it’s probably for the best that President Trump has all but ignored the fact that more than two dozen wildfires incinerated so much of California, the world’s sixth largest economy, in just a few harrowing days. Sure, Trump briefly mentioned the wildfires at the top of his ludicrous tax reform speech the other day, but that was it. Even then, he made it seem like business as usual. Another set of wildfires in California -- yawn.

Trump’s throwaway remark belied the reality that these firestorms have claimed nearly 50 lives so far, while also manufacturing thousands more newly homeless Americans. I’m sure many working-class Santa Rosans will be thrilled to learn that while they were picking through the rubble and, like me, spawning all kinds of new pre-existing conditions after breathing toxic fumes for days on end, Trump was sabotaging our health insurance plans by inexplicably rescinding cost sharing reimbursements for co-payments and deductibles. For now, none of it seems to matter as much as simply being alive, reaching for any normalcy that can be found amid the mayhem.

Your tweets and Facebook status updates about whether Trump should be playing golf today or whether he should be deplaning Air Force One at Charles M. Schulz Airport in North Santa Rosa are unnecessary. We seem to be doing just fine without him. Seriously. He’s not needed here and, in fact, any appearance by this president would merely off-gas his divisive stink into a crisis that already smells badly enough on its own. It might be another story if Trump were a competent leader who was up to speed on the humanitarian and economic details of this emergency. But he’s shown zero aptitude for any of it, nor does he appear willing to do better.

Trump in a crisis is like a harpooned orange whale, flailing around in a swimming pool. We don’t need him here, ignorantly hurling fire extinguishers at our heads. We don’t need his inevitably inappropriate blurtings about, I don’t know, three million allegedly illegal votes for Hillary in California. We don’t need him scolding California for whatever misperceived grievances he and his disciples might have. We don’t need his superlative whining, or his outright nasty tweets after the fact, adding insult to injury. We definitely don’t need another insufferable Lee Greenwood music video, cloyingly exploiting the tragedy to make Trump’s laughably minimal effort look grander than it actually was.

There are more than 8,000 first responders and firefighters on the ground here, with plenty of competent leaders doing the good work of the people. We’re helping each other, too, irrespective of our votes or the content of our Twitter timelines. We all agree on the science of these disasters, and we’re all agreeing that competent government intervention is irreplaceable. Along those lines, you’d better believe we’re all cheering for the countless heroes of this disaster, regardless of whether they’re pro-choice or pro-gun.

Today, I feel a little numb to the reality of what I experienced last week. It’s abundantly clear to me how close I came to losing everything, even though the full impact of the thing might not fully smack me in the head for days or weeks. But I’m feeling extraordinarily lucky that what became known as the “Tubbs Fire” didn’t quite make it to my front door. I feel lucky that I can sit here at my desk writing to you instead of wondering when I’ll own a desk again.

I’m grateful for the knowledge that we haven’t completely walled ourselves away from the ideals of community and the generous embrace of our neighbors. We can still do this, I think. Americans aren’t quite as divided as it seems -- not yet, at least. It turns out, through all of the anguish and despite whatever Trump is up to, America is already pretty damn great. I’ve seen proof this week. And it didn’t require anything from the president to be that way.