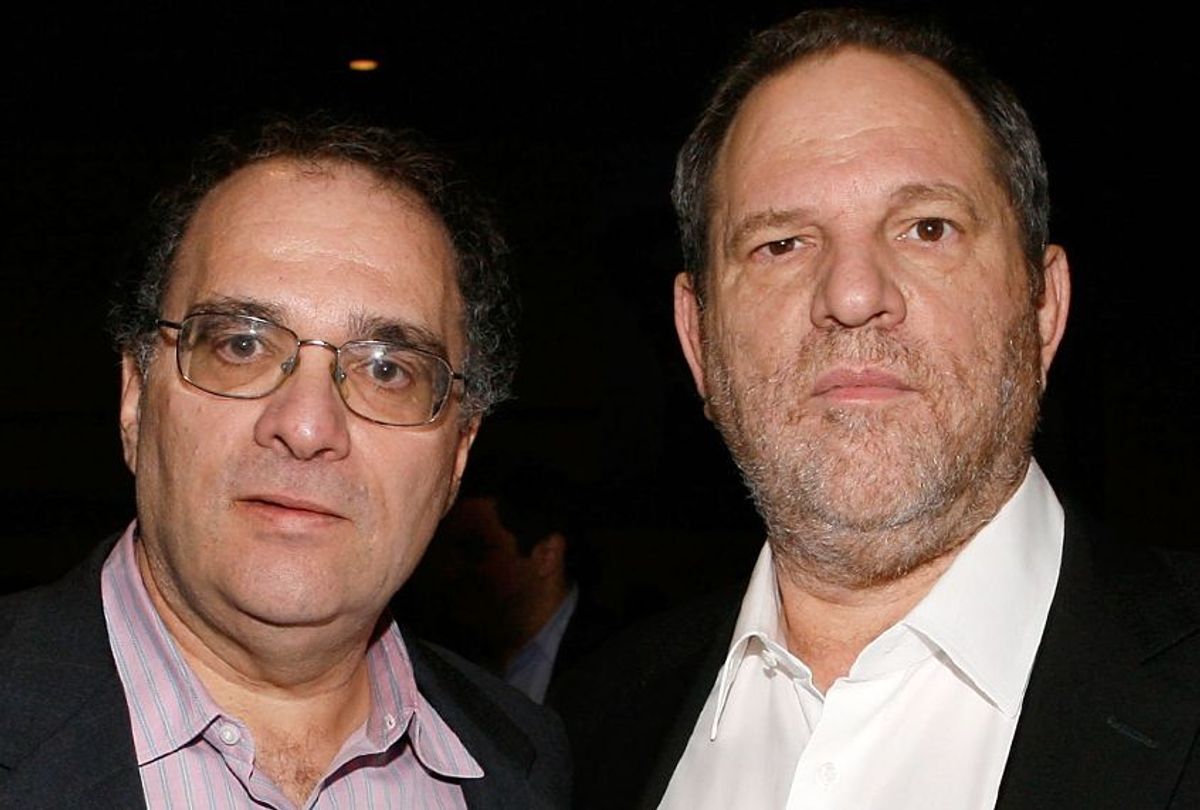 Brothers Bob and Harvey Weinstein may have somewhat more in common than originally thought (though Bob would really like you to think otherwise). According to a exclusive in Variety, a female showrunner has come forward with accusations against the second (and less visible) Weinstein, who has worked with and without his brother as an almost equally successful producer for decades, of sexual harassment.

Amanda Segel, an executive producer of an adaption of Stephen King's “The Mist,” told Variety that Bob Weinstein continued to ask her to dinner and make “romantic overtures,” which Segel repeatedly declined or rejected, for nearly three months. They continued until her lawyer informed The Weinstein Company that she would leave the production if Bob Weinstein did not limit their contact to professional matters.

Much as with most cases of sexual harassment regarding power dynamics, the situation at hand began when Bob Weinstein invited Segel to dinner. She felt it prudent to accept “in an effort to establish a professional relationship with the head of the company." Segel said that at that dinner, the younger Weinstein repeatedly implied that he expected to sleep with her and asked “highly intimate questions.” By the end of the night, she claims, Bob asked Segel to drive him back to his hotel and then join him upstairs, in a move that echoes most of the allegations against his older brother. Segel declined.

Following their evening together, Weinstein allegedly began sending unprofessional emails and asking that the two be friends. According to Segel, she continued to stand her ground and remind him that their friendship could be a possibility so long as it stayed platonic.

She claims that Weinstein continued to surpass friendliness, inviting her to a party at a rented house in Malibu. Segel, however, says she suspected it would not be a party, but in fact just the two of them. Again, it's another mirror of allegations against Harvey Weinstein.

In another incident, Segel alleges that Bob invited her to another dinner. For cover, she apparently brought along another “The Mist” executive producer. Segel says Bob was unenthused. She claims that after that, their relationship turned aggressive and Bob later screamed at Segel for a production situation that was “out of her control.”

As Segel tells it, this was the point at which she brought her lawyer into the mix for a series of negotiations that resulted in the agreement that there would be zero interaction between Segel and Weinstein. Supposedly, Segel would remain on the show, but would never be in the same room or on the same phone call as Weinstein.

“‘No’ should be enough,” Segel told Variety. “After ‘no,’ anybody who has asked you out should just move on. Bob kept referring to me that he wanted to have a friendship. He didn’t want a friendship. He wanted more than that. My hope is that ‘no’ is enough from now on.”

Weinstein, for his part, vehemently denies these accusations. “Bob Weinstein had dinner with Ms. Segel in LA in June 2016. He denies any claims that he behaved inappropriately at or after the dinner. It is most unfortunate that any such claim has been made,” said his representative.

These allegations come in the midst of Harvey Weinstein’s own self immolation. After what may be three decades of sustained and abetted abuse, over 50 women have come forward with allegations against him, ranging from sexual harassment to rape, including at least 5 cases of assault. On Tuesday, “Game of Thrones” actress Lena Headey claimed she was sexually harassed by Harvey. That same day, Harvey formally resigned from the board of The Weinstein Company after Bob and the rest of the TWC board voted to ratify Harvey's termination.

In an industry where women are at risk when faced against powerful executives, these allegations come as no surprise. However, it’s more concerning, and perhaps, frustrating, that they follow two weeks of Bob Weinstein throwing his brother under the bus to keep TWC afloat, acting as though the very thought of sexual harassment comes completely out of left field. He even went so far as to say that his brother's actions have trapped him in a “waking nightmare.”

“I’m ashamed that [Harvey] is my brother, to be honest, and I am ashamed that these are his actions,” Bob Weinstein told The Hollywood Reporter. "I have a brother that's indefensible and crazy. I want him to get the justice that he deserves."

Now it appears as if Bob has much more to fear, and lose, than the simple tarnishing of his brother’s and his company’s reputations. As allegations often empower other victims to come forward, there’s a great possibility that Segel’s claims will be the first of many to come to light.