A Trump supporter walks into a bar . . . 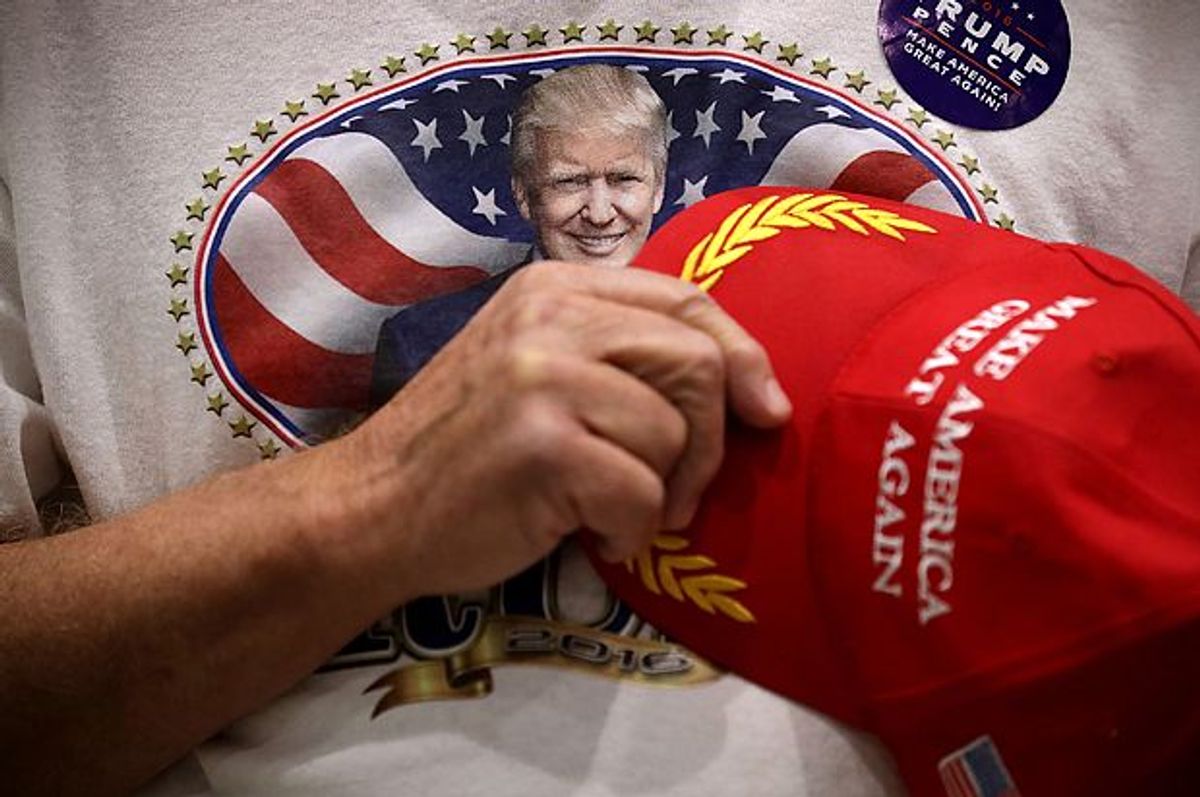 This much is known: In January 2017, the tumultuous month of inaugurations and women’s marches, Greg Piatek, 30, visited The Happiest Hour bar in New York City. Buying drinks for himself and his friends, Piatek ran up a tab of $182, and paid the usual 20% tip of $36. Beyond here, the stories diverge.

Piatek claims he spent his time at The Happiest Hour wearing the most controversial hat in the world, the red Make America Great Again baseball cap. According to him, he was called a “terrible person” by one bartender, another bartender ignored him, asking if the hat was a “joke” while serving him and yet another cut him off. Ultimately, he alleges, a bouncer kicked him out at the manager’s request.

The management at The Happiest Hour denies every part of Piatek's story.

Now, Piatek has slapped the bar with a “discriminatory conduct” lawsuit, alleging “anxiety and severe emotional distress,” according to the Gothamist. This he said-they-said legal kerfuffle has taken on religious proportions as the Trump supporter is claiming his reverence for the president — signaled by his red hat — should have the same legal protections as any religion.

"A religious belief can appear to every other member of the human race preposterous, yet still be entitled to protection,” say the legal briefs field on behalf of Piatek. As part of a claimed “protected class,” Piatek was "adhering to his closely held spiritual beliefs by adorning the hat in question,” says his attorney. According to him, the MAGA hat, emblazoned with a logo for a race of the highest political office in the nation “transcends the political realm.” Eighty-sixing Piatek, the lawsuit claims, is little different than, say, denying service to a believer because they wore a veil, cross or yarmulke.

As mentioned, the manager of The Happiest Hour denies Piatek’s story, reasoning that he must have had a good time because of the tip noted on the receipts provided. Piatek, however, says the night at The Happiest Hour was “the most discriminatory, humiliating and 'Saddest Hour' of his life."His attorney says his client has "such a good heart that he’s going to tip no matter” the service or discriminatory treatment.

The attorney for the bar, Preston Ricardo, told Gothamist "The plaintiff's vague and conclusory arguments are entirely fanciful. . . . They have no support in the law. And they continue to show that the action is nothing more than an ill-conceived publicity stunt guised as a lawsuit."

What would the source and goal of this “publicity stunt” be, however? A soft launch of “The Trump International Church of Winning”? Given previous messianic reactions to Trump, it's not entirely out of bounds.

It doesn't seem like Piatek has a case here, however, as it might be hard to say that getting cut off and kicked out of a bar after achieving a three-digit tab would be discriminatory. Many circumstances can get you kicked out of a bar, and if Piatek was wearing the hat the whole time, he was presumably still being served by someone.

Though the Federal Civil Rights Act of 1964 prohibits discrimination by privately owned public accommodations on the basis of religion, the fact that Piatek was in fact served $180 worth of libations or food, means that he was served, however begrudgingly. The religious tack is the second argument Piatek brought forward. The fact that the defense had been confident that they might get the case tossed all together, according to Gothamist, might be a bad sign for future legal action.

Seems this particular MAGA snowflake might be a bit too sensitive, if full service and a couple of allegedly unkind words ruined his year.