Trump guts critical health care for the poor — and nobody noticed

The assault on Obamacare runs deep: Trump allows coverage for millions of poor kids to expire — and that's not all 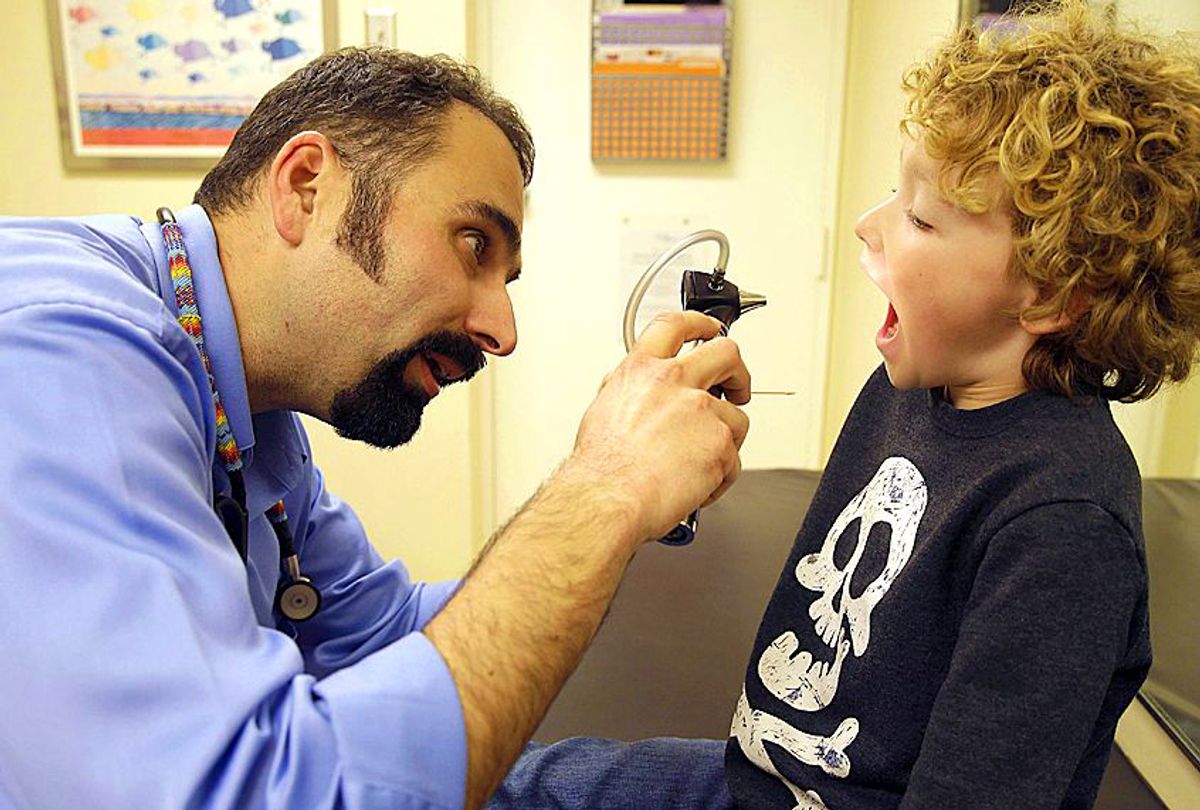 Jimmy Kimmel’s impassioned plea to save the Affordable Care Act by invoking his personal story about his infant son Billy’s vital heart surgery was an inflection point in the national debate on health care. Unfortunately, it was just a tiny speed bump for President Trump and the Republican Party's race not only to burn down Obamacare, but to torch decades of bipartisan safety-net health care legislation that long predates Barack Obama.

It would seem that the mainstream media keeps underestimating the lethality of this crew, at the nation's peril. After hearing Trump brag over the weekend about his decision to suspend the supplemental subsidies that help low-income people make payments under the ACA system, it is clear he is pursuing a scorched-earth strategy in order to gain a victory that Senate Majority Leader Mitch McConnell and House Speaker Paul Ryan could not give him.

Two other essential health care programs have been permitted to lapse, and almost no one noticed amid the media tsunami around the downfall of Harvey Weinstein last week and the mass shooting in Las Vegas on Oct. 1. The aberrant behavior of older white guys is jamming the airwaves and using up all the oxygen in the Twittersphere. On the day of the shooting, government authorization of the Children’s Health Insurance Program (CHIP), which covers more than nine million poor kids, lapsed. So did authorization for the Federally Qualified Health Center program, an essential part of protecting the public health for decades -- especially for poor people in rural America, who are exceptionally likely to have voted for the current president.

Coverage for millions of kids

CHIP, which provides low-cost health care coverage to roughly nine million children from low-income families, was passed in 1997 under President Bill Clinton and continued without controversy under George W. Bush. It has been credited with reducing the percentage of uninsured children from close to 14 percent before the law was enacted to 4.5 percent in 2015. Between Medicaid and CHIP, the two programs insure 43 percent of the nation’s children.

At least 10 states are set to run out of CHIP money by the end of the year, and five states -- Utah, Arizona, Minnesota, Nevada, Texas and West Virginia -- will soon have to close down the program or freeze enrollment. The Kaiser Family Foundation has reported that 48 of the 50 states banked on the assumption that Congress would reauthorize CHIP, as it has for the last 20 years, when they passed their 2018 state budgets. Talking Points Memo reports that 21 states and the District of Columbia will run out of CHIP money by the first quarter of next year.

Amid the large numbers and acronyms, it's difficult to convey the flesh-and-blood consequences of this story in the same compelling manner that Kimmel’s reference to Billy did. The next best thing is to seek out a veteran public health nurse who has seen the value of CHIP up close.

Judith Arroyo is president of New York City’s Public Health Nurses Local 436. She says that CHIP has dramatically improved the lives of children, and by extension, their families. Congress’s failure to reauthorize the program, in her view, puts decades of public health gains at risk.

Health care coverage for children measurably improves their health outcomes, Arroyo said in an interview. “You have less absenteeism. They can concentrate better on their school work. Think about it holistically: If a child learns how to take care of their own diabetes — if they know how to count carbohydrates and do the formula themselves and be able to manage their own diabetes -- then there are less emergency-room visits. They can go out and play basketball and mom or dad or a nurse doesn’t have to be hovering over them. The same thing is true with asthma.”

According to the Advocates for Children of New Jersey's annual survey, New Jersey Kids Count, thanks to both CHIP and Medicaid just 3.7 percent of the state's kids were uninsured. “Children need quality healthcare to grow into healthy adults,” the ACNJ report said. “Research shows that children who have health insurance coverage are more likely to receive the preventive care they need to avoid medical problems that require costly and painful treatment.”

There is a vital synergy here. Bipartisan support for CHIP has ensured that more kids got covered and also that doctors got better at diagnosing and treating the things that make kids sick. “In our pediatric practice in Newark, we only have a three percent charity care rate" thanks to CHIP, said Dr. Glenn Fennelly, chair and professor at Rutgers New Jersey Medical School.

"Near universal health care for children supports the development of real expertise in pediatric primary care and in treating the most common chronic illnesses like asthma and diabetes in children,” Fennelly continued. “This has produced diligent, well-trained pediatricians who thrive in an evidence-based practice, and who contribute to improving health outcomes for the most vulnerable children in New Jersey."

Letting CHIP lapse is an act of violence not just against poor kids, but against all of America’s children. No matter how rarefied the air, deadly diseases are communicable. “It may create a pool of vulnerable children who won't be vaccinated to prevent measles, whooping cough or meningitis outbreaks,” warned Fennelly. “You will miss the opportunity to reduce future complications of obesity or to address emerging mental health issues. CHIP really works. Why put it at risk?"

Care for the "least among us"

The initial concept of federally supported health care centers for underserved and most at-risk populations goes back to Lyndon B. Johnson’s War on Poverty. In 1989 Congress followed up, designating a network of FQHCs, community-based organizations funded under the Public Health Service Act that charge fees on a sliding scale and must provide health services to all, regardless of ability to pay.

Today, these lifesaving and disease-preventing community health centers operate in more than 9,500 locations -- largely but not exclusively in rural America -- serving 27 million people. They  provide a vital pressure release valve for overtaxed hospital emergency rooms. “They are the main source of health care for many low-income Americans — and the only source of primary care in many underserved areas,” according to Kaiser Health News. “Health centers provide preventive care, counseling, dentistry and primary care to everyone, whether or not they can pay.”

“The anxiety level is increasing on almost a daily basis,” Dan Hawkins, senior vice president of the National Association of Community Health Centers (NACHC), told Kaiser Health News.“There is broad support and agreement in Congress that [reauthorization] should get done, but we are working against a ticking clock and a crowded legislative calendar.”

Fennelly says the FQHCs are vital because the medical outcomes of the poorest and most vulnerable have broader health impacts for society as a whole. “Part of their function is to be the ultimate safety net -- to capture anyone who is not insured for any reason, including the undocumented or the homeless,” he said.

"The most immediate example of a public health vulnerability, if you don't have a home with basic sanitation" or have inadequate vaccinations, Fennelly said, "is the spread of communicable diseases like hepatitis A virus. Without some regular basic health screening, you could see something like drug-resistant tuberculosis getting a foothold in the population."

A perfect example unfolded recently in San Diego, where a hepatitis A outbreak got a foothold in the homeless population and spread to other California cities, including Los Angeles and Santa Cruz. That outbreak has now killed at least 18 people and sickened another 600 or so, and state officials warn it could last years. Last week, Gov. Jerry Brown declared a state of emergency.

"When you screen for diseases, you detect diseases earlier, which saves costs by heading off complications," said Fennelly. "At the same time, you're safeguarding the general public health, especially when it comes to addressing infectious diseases." What troubled him about the California hepatitis outbreak, he said, was that "there is a critical mass of tens of thousands of homeless people in the U.S. that have somehow become invisible to our health care system, to the point that the hepatitis A outbreak could get that kind of traction and be so lethal.  This should be a real concern to us all. We ignore this population at our peril."

Not surprisingly, the one portion of the ACA that Trump and the Republican Congress allowed to play out was perhaps the worst single element of Obama’s landmark achievement. Under the ACA, the federal government planned to reduce the tens of billions of dollars it pays out to "disproportionate share" hospitals that care for the poorest of the poor. As more people got coverage, the theory was, the ranks of those needing charity care would decline and federal aid would no longer be needed. But the ACA expressly barred undocumented immigrants from coverage, which left a city like New York with half a million people totally reliant on the municipal hospital system.

These cuts, which will cost the nation’s 3,000 safety net hospitals $43 billion between 2018 and 2025, were written into the ACA legislation in 2010, but the Obama administration and Congress never pulled the trigger.

The ACA has been a great success in many ways, bringing down the ranks of the uninsured from 44 million in 2013 to 28 million in 2016. According to the Kaiser Family Foundation, 78 percent of those remaining uninsured were American citizens, and at least three-quarters had at least one full-time worker in the family. For close to half of these households, according to KFF polling data, even the subsidized coverage offered by the ACA was too expensive.

Under Trump, we get the worst aspects of Obamacare, the undermining of its elements that worked well and the evisceration of the existing safety net. Taken in totality, what these cuts will mean for every patient -- even those with platinum health care overage -- is a longer wait in the emergency room. For people on the margins, the consequences could be much worse.

Whether the Trump electorate, especially in the 200 working-class counties he carried that had twice previously voted for Obama, will wake up is anybody's guess. At any rate, it has become more difficult to ignore what Trump has in store for them.