Get out your tinfoil hat! 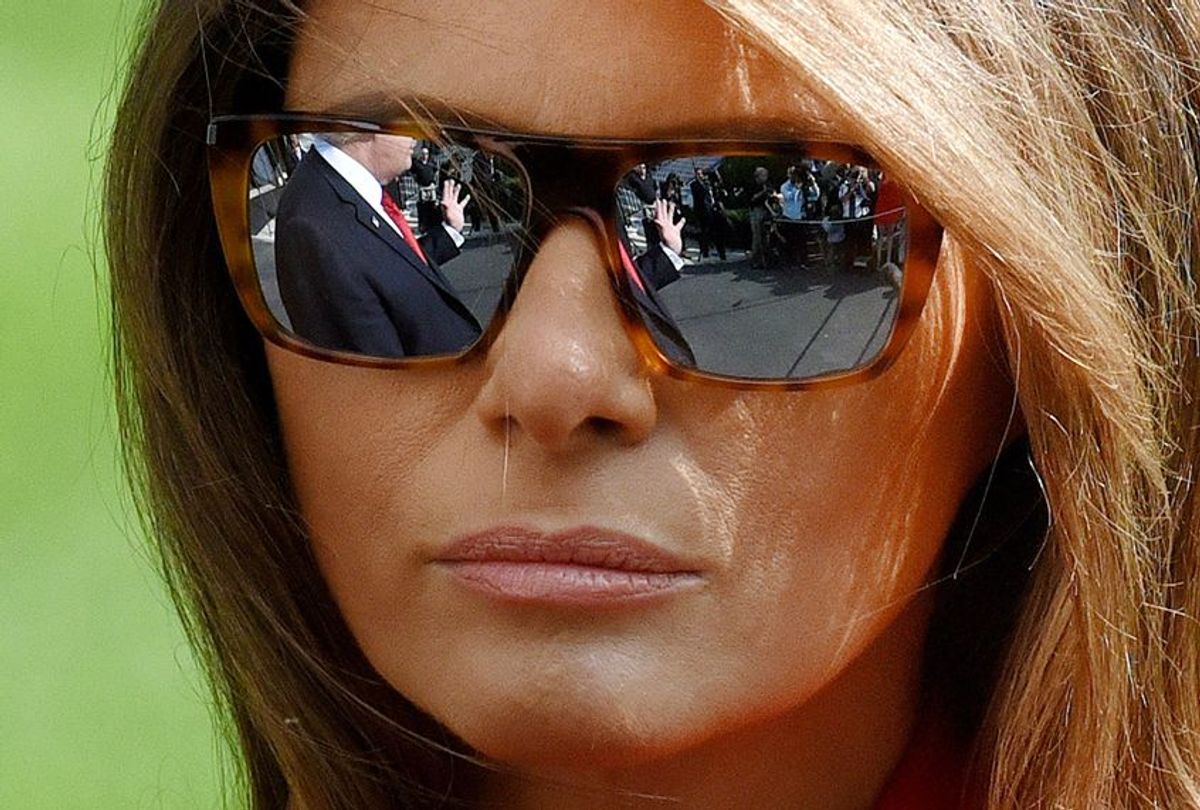 So the latest, sexiest Twitter conspiracy theory seems to be originating from the account @Joe Vargas of BuyLegalMeds.com. It alleges — wait for it — that during a recent appearance with President Donald Trump, First Lady Melania Trump was replaced by a body double.

Basing his theory — if indeed he offers it in good faith — on comparative analysis of various photos, Vargas tweeted that he was confused over the appearance of the supposed imposter, noting that while she is superficially similar to the first lady, there appears to be an extra ridge on her face.

In the video displayed below, the camera slowly zooms in on a sunglasses clad Melania as Trump references his "wife Melania who happens to be standing right here." It's . . . something.

This is not Melania. To think they would go this far & try & make us think its her on TV is mind blowing. Makes me wonder what else is a lie pic.twitter.com/JhPVmXdGit

Because that is what they do, Twitter erupted with memes and opinions for both sides of the argument. Some Twitter users actually agreed with the theory.

I mean if you think this is Melania Trump then you're a blind person https://t.co/qxoyQFouvm

Some laughed the conspiracy theory off.

Some even weighed in on who this imposter might be.

In the end, it looks like a job for Superman, who presumedly used his x-ray vision to confirm that it is, in fact, the real first lady.

About the Melania Trump controversy...

I think it's really her.

You humans just don't know how much a pair of glasses can change a person. pic.twitter.com/SsI3l3IOFo

Yes, this one may just be another in the long line of fun, fraudulent body-double theories. In shouted diatribes and whispered jokes, some have alleged that Paul McCartney, Andrew W.K. and Avril Levigne have all at one time or another been replaced with lookalikes.

It should be noted there is historical precedent for the use of impersonators on the world stage. It confirmed that Russian leader Joseph Stalin, Iraqi President Saddam Hussein and British Field Marshal Bernard "Monty" Montgomery all used body doubles for purposes of either personal security or strategic deception. There are suggestions that Chinese Communist Chairmen Mao Zedong and members of North Korea's ruling family have employed them as well. None of that should be ammunition for the almost surely false theories surrounding Mrs. Trump, however.

Instead, we should look back to our own feelings about authority, about government. Since the betrayals of the Vietnam War and Watergate, Americans are willing and perhaps even happy to imagine the worst about those in power, to see lurkers in every shadow, to view every single bit of questionable information as a glitch in the matrix. It's what fuels the belief in an ongoing alien invasion, global-warming denialism, anti-vaxx campaigns, the continued questioning of the Kennedy assassination, the 9/11 Truther movement and 81.2 percent of everything Alex Jones says or does.

Even this halfhearted Melania conspiracy theory, this odd moment of people having genuinely silly fun at the administration's expense, speaks to the exact tendencies that allowed Trump to become president in the first place. Since we no longer view authority as having a premium on the truth, feelings often trump facts and reality is defined by the most emotionally compelling argument. Here, it's the humor that's compelling (though the meme also points to how essentially untrustworthy the Trump administration is).

Unless, of course, that is a body double. Who knows what's real then?