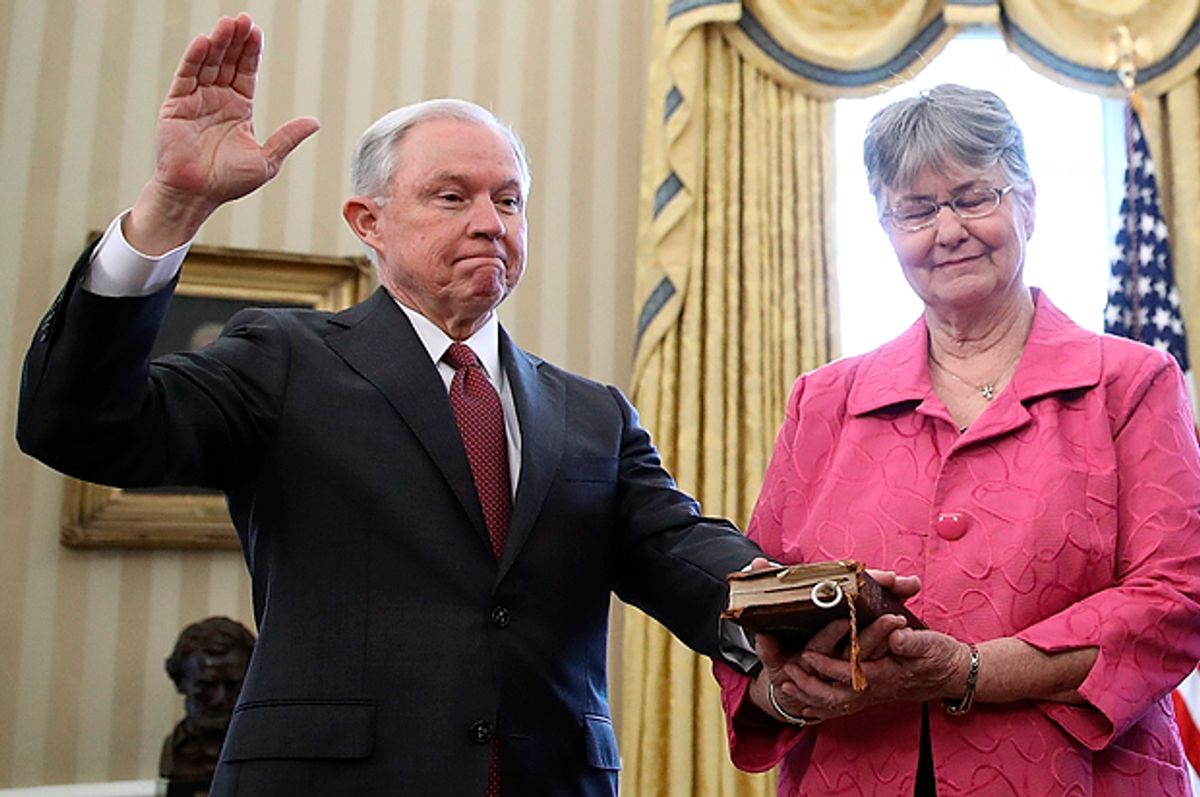 President Donald Trump has not yet asserted executive privilege, but his attorney general, Jeff Sessions, certainly presumed that authority for him to stonewall on the president’s behalf under questioning from the Senate Judiciary Committee.

In his first appearance before the Congressional committee that endorsed his nomination since becoming the nation’s top lawyer, Sessions exhibited a great deal of contempt for his former colleagues and the committee he once served on.

Perhaps fearful that his boss will yet carry out his version of the infamous 1973 Saturday night massacre, Sessions dutifully defended Trump by refusing to reveal any pertinent information on possible high crimes committed by the president.

Only eight months into his tenure, Sessions has already faced his own near firing. On Wednesday, he appeared determined that never comes to fruition and displayed an unnerving fealty to Trump. But despite all of his obfuscation under oath, Sessions ultimately did little to protect himself against the petty and vindictive management style Trump has implemented in office. As even Fox News’ top legal contributor Judge Andrew Napolitano even noted shortly after Sessions wrapped up his testimony, the attorney general should stop playing the role of the president’s personal lawyer and hire his own personal counsel.

Sessions “has stretched the concept of privilege beyond all legal recognition.”

The attorney general pursued an aggressive understanding of presidential privilege to protect his boss on an array of issues from the Comey firing to the Russia probe to his pardon of Sheriff Joe Arpaio.

"I can neither assert executive privilege neither can I disclose today the contents of my confidential conversations with the President," Sessions told the Senate Judiciary Committee. "I cannot waive that privilege myself or otherwise compromise his ability to assert it," he would later reiterate when questioned by Democrats on the panel.

Sessions said he would not detail his conversations with Trump “until such time that the president makes an exception,” arguing, “The president is entitled to have confidential communications.”

Wednesday’s hours-long testimony resulted in few new revelations from Sessions, as the attorney general repeatedly rebuffed requests for information while under oath and quibbled with Democratic questioners — most notably with Sen. Al Franken of Minnesota. Last week, all nine Democrats on the committee sent Sessions a letter demanding answers to questions that he refused to answer in June.

Asked by Sen. Dianne Feinstein, D-Calif., if Trump mentioned Russia when he discussed his decision to fire former FBI director James Comey, Sessions again told senators that he would not breach the president’s privilege and declined to answer whether Trump had discussed firing Comey to “lift the cloud” of the Russia investigation.

During his sworn testimony in front of the Senate Intelligence Committee in June, Comey recounted a phone call he received from Trump on March 30: “He described the Russia investigation as ‘a cloud’ that was impairing his ability to act on behalf of the country … He asked what we could do to ‘lift the cloud.’” Comey also testified that Trump mentioned “the cloud” when he called on April 11 to press him about a public statement announcing that he was not under FBI investigation.

Sessions would only say on Wednesday that he couldn’t “confirm or deny the existence of any communication with the president that I consider confidential.”

He was, however, more than willing to tell Feinstein that he did not believe there was full understanding of the “significance of the error” in Comey’s handling of the investigation into Hillary Clinton’s use of a private email server while she was secretary of state. So much for the confidentiality of private discussions.

In another testy exchange, Sen. Leahy put Sessions on the hot seat about his past denials of Russian contacts during the campaign, taking him to task for providing “false” testimony. Leahy accused Sessions of misleading Congress — which is a crime — when he responded to a question on his confirmation questionnaire by claiming that he did not have any contacts with Russians during the 2016 campaign. Of course, it was revealed after Sessions took office that he did indeed have three meetings with the Russian ambassador to the U.S. during the campaign.

Sessions, however, simply denied that he provided inaccurate information during his January hearing. "I believe my answer was correct," Sessions said, pulling out the questionnaire to prove his point.

“I don’t recall any conversation about the details of the campaign,” Sessions said on Wednesday — an answer which clearly irritated Sen. Leahy:

“When you did disclose such meetings, you said you did not recall what was said at the meetings. Now, your answer to my question was an emphatic no. It wasn’t ‘I don’t recall.’ You’re a lawyer, I’m a lawyer. You’re, in fact, our nation’s top lawyer. Is there a difference between responding ‘no’ and ‘I do not recall’? Is that legally significant?”

The attorney general then relented, admitting it was “possible” that “some comment was made about what Trump’s positions were,” though he also said, “I don’t think there was any discussion about the details of the campaign.”

Sessions has since recused himself from overseeing the Justice Department’s Russia probe because of his role as a Trump campaign adviser. The disclosure of Sessions’ contacts with the Russian ambassador in part prompted that recusal. Announcing his decision in March, however, Sessions said he had talked with Kislyak only in his capacity as a senator, not as a Trump surrogate.

“That, to me, is moving the goalposts every time. We're starting off with an extra point, and by the end we're going to a 75-yard field goal,” Sen. Al Franken noted, immediately sending Sessions into a rage he's so clearly had reserved for the Minnesota Democrat for months. (Watch their first fiery exchange here.)

Either evoke executive privilege or talk:

In the end, through the hours of Sessions’ frustrating dithering, aside from the news that Sessions has not (yet) been interviewed by special counsel Robert Mueller, the only thing we learned on Wednesday is that Republicans in the Senate have no interest in pursuing the truth — especially if it means finding out that Trump has committed a felony.

Jeff Sessions has no right, legal option, or guidance to refuse to answer questions from Congress — a co-equal branch — as California's Kamala Harris pointed out back in April and Sen. Sheldon Whitehouse, D-R.I., reiterated on Wednesday. Either the president can assert executive privilege, at which point he can be legally challenged in court — a move that left Richard Nixon with little recourse but to resign amidst his own scandal — or Sessions can start talking. But until the Republicans who control every relevant committee subpoena Sessions, the attorney general can continue to lie by staying silent, no matter how many times Democrats drag him back up to the Hill.