Trump attacks birth control — but states are ready to fight

Trump and his allies want to limit access to contraception, but many state officials are suing to stop him 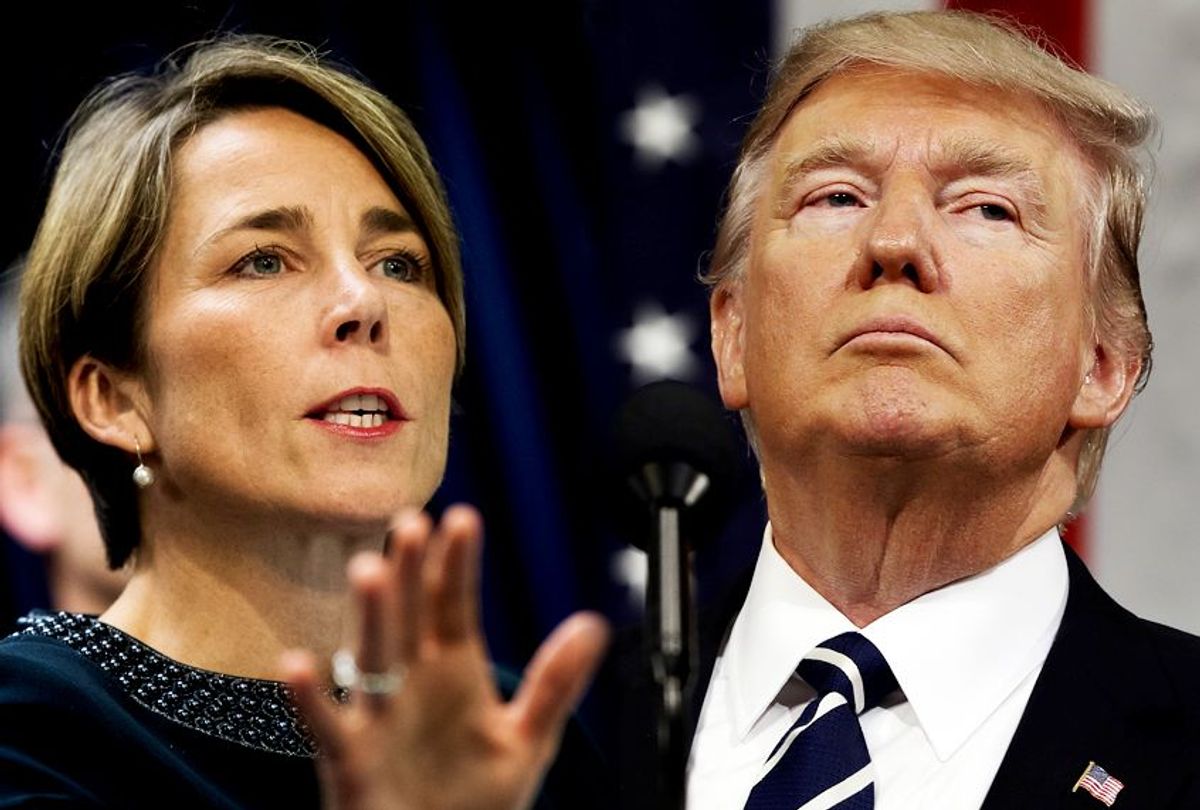 It's a story that got lost in the constant noise caused by our duly elected president picking reality TV-style fights with football players and war widows, but it could have a major impact both on women's access to health care and Donald Trump's efforts to evade the legal checks on his executive power. On Oct. 6, which was a Friday — the traditional day for burying important news — the Trump administration released a rule that would allow any employer not to cover contraceptive services in health insurance provided to employees. Under the new rule, your boss doesn't even have to pretend to have religious reservations about it. All he needs to do is claim "moral" reasons to assert his right to try to control your sex life by manipulating your health care plan.

As soon as the administration passed this rule, the attorney general of Massachusetts, Maura Healey, filed suit in federal court to stop the law. California Attorney General Xavier Becerra quickly followed. Since then, attorneys general Bob Ferguson of Washington and Josh Shapiro of Pennsylvania have filed their own lawsuits. These four, plus 14 others, have also written a letter protesting the rule change.

“President Trump and his administration are about holding women back, plain and simple," Healey told Salon. "Under the guise of religious freedom, they are looking to take away basic, preventative health care services from 55 million women across this country."

The lawsuits object to the rule change both on procedural and substantive grounds. These attorneys general argue that letting employers deny contraceptive coverage violates both women's religious freedom and their right to equal protection under the law. They also claim the administration violated the Administrative Procedure Act by forcing this rule change through without following established protocols that have been in place since 1946.

“Under the principles of religious freedom, you can’t put an employer’s religious beliefs over the rights of their employees," Healey said, explaining the First Amendment objection. As for the 14th Amendment objection regarding the right of equal protection, “You see a rule that only applies to women," she said, "and therefore it discriminates against women.”

"These anti-women's health regulations prove once again that the Trump Administration is willing to trample on people’s rights," Becerra argued in an emailed statement. "What group of Americans will they target next? Will they allow businesses to deny you cancer treatment?"

The equal protection argument is aided by the fact that the Affordable Care Act covers a whole bevy of preventive health care services that insurance plans must offer without a copay, including vaccines, blood pressure screening and HIV tests. Singling out contraception -- and only contraception -- looks like a specific attack on women, especially in light of the administration's pattern of sexist policies and ideological stances.

Beyond the core issue of women's rights and religious freedom, there are also pragmatic issues at stake. Contraception was classified as a critical prevention service in the first place because the Institute of Medicine carefully studied the issue and offered an expert recommendation to the Department of Health and Human Services in 2011, noting that contraception was necessary so "women can better avoid unwanted pregnancies and space their pregnancies to promote optimal birth outcomes.”

“Before the Affordable Care Act mandate, one in three women struggled to afford birth control," Shapiro, the Pennsylvania attorney general, told Salon. "Since the mandate has been put in place, and these preventative services are covered by federal law, less than four percent of women struggle to pay for that care.”

In response to these expert opinions, the Trump administration argued there are "several contraceptive methods that many persons and organizations believe are abortifacient" and that families "may share objections to contraception [that] could, among some populations, affect risky sexual behavior in a negative way."

Well, you can claim to believe that birth control pills make you fly and cause you to fart rainbows, but that doesn't make it true. Yes, some religious conservatives claim that birth control is equivalent to abortion and that it causes people to have "risky" sex, but both claims are simply false. Indeed, the evidence shows that contraception use reduces the riskiness of sex -- which makes sense, since that's pretty much the point. Indeed, both arguments are largely offered in bad faith by groups that simply don't want to admit that they object to women having the freedom to choose when and how they get pregnant.

"This is an administration that doesn’t want to deal in science, facts, research, data," said Healey, the Massachusetts attorney general, noting that she and her colleagues in other states have also been forced to sue the Trump administration over its anti-scientific environmental policies.

The attorneys general also have a strong case against the Trump administration on procedural grounds.

“There are basically four steps you need to take to put a rule into effect," Shapiro explained. An agency is supposed to post notice, make an official proposal, allow public comment and then finalize the rule. "In this case, the president just went to step four and ignored the first three steps," he said.

There is some flexibility in the law for skipping procedures in an emergency, but it's difficult to argue that stopping your female employees from having pregnancy-free sex on their own time meets that criterion.

One would hope the pettiness and meanness of this policy — as well as the short-sightedness of employers who apparently want their employees to endure the stress and inconvenience of an unwanted pregnancy — would be enough to convince the courts. Sadly, as the decision in Hobby Lobby v. Burwell demonstrated, one cannot underestimate the Supreme Court conservative majority's antagonism towards workers rights, nor its queasiness about the idea of women having sex for pleasure.

Meanwhile, Trump continues trying to stack the deck in the federal court system, as demonstrated by his recent judicial nomination of Jeff Mateer, who has compared insurance coverage of contraception to the Holocaust.

Still, Trump can't get everything he wants in the courts, as the repeated rejection of his travel ban has made clear. This contraception move is such an egregious and obvious violation of longstanding procedural law that the attorneys general have good reason to believe they can win.