The breast cancer fight went corporate 25 years ago this month 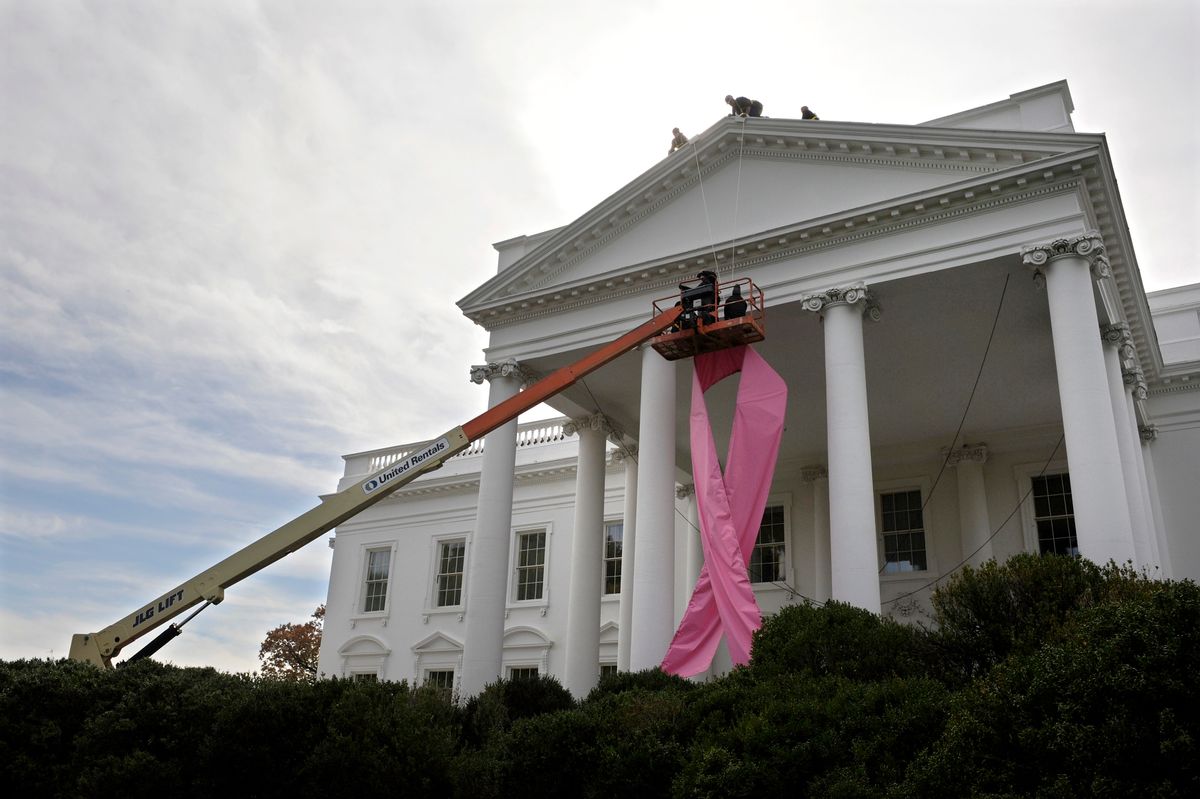 Breast cancer is the darling of corporate America, with pink ribbons adorning everything from handbags to handguns. Corporations put a pink ribbon on their products to boost sales and build their brand. And it works — sales go up and profits increase. Unfortunately, despite 25 years of pink ribbon marketing, breast cancer diagnoses have not gone down.

It’s one reason the national education and activist organization that I lead, Breast Cancer Action, has long called October “Breast Cancer Industry Month.” October was designated Breast Cancer Awareness Month (BCAM) more than 30 years ago—by the corporation now known as AstraZeneca, in partnership with the American Cancer Society. Three decades later, corporations in virtually every industry participate in breast cancer promotions. It’s no surprise that Pharma and biotech companies that produce treatments get involved. But corporations that manufacture products that increase the risk of breast cancer also join up with multimillion-dollar cancer charities to “raise awareness” during BCAM. This coordination produces a neat profit cycle for all involved, by keeping the spotlight on awareness and early detection while ignoring primary prevention.

The now pink ribbon was, from the very beginning, a corporate take-over of what began as a peach-colored ribbon focused on prevention. Charlotte Haley developed the first breast cancer ribbon to promote political action and bring resources and attention to breast cancer prevention. When Estée Lauder and Self magazine approached Haley in 1992 to partner, Haley declined, saying they were “too corporate.” Not to be deterred, Estée Lauder and Self “rebranded” the ribbon at their lawyers’ advice. And when they changed the color of the ribbon, they also changed the focus from prevention to their own corporate profit.

Nothing reveals the profit motive behind the corporate pink ribbon more clearly than the practice of pinkwashing: when companies claim to care about breast cancer by promoting their pink ribbon products, but at the same time produce, manufacture or sell products that may increase the risk of the disease. When Estée Lauder slapped the first pink ribbons on their products they not only launched the breast cancer industry, they became the original pinkwasher. Estée Lauder tells us to buy their products because they care about breast cancer. But they don’t tell us that their products contain chemicals that may increase the risk of the disease — or even interfere with treatments.

A number of chemicals have been associated with increased breast cancer risk. Hormones play a critical role in the development and treatment of breast cancer. And a large body of research implicates commonly-used hormone disruptors in increasing risk of the disease. Some newer research suggests that these same chemicals might also interfere with the most common breast cancer treatments.

Cosmetics and personal care products are one of the least regulated industries in the U.S. Which means that Estée Lauder can comply with the law, and still their products may expose users to chemicals that are suspected to increase the risk of breast cancer. Indeed, Estée Lauder is choosing to celebrate 25 years of pink ribbon marketing by encouraging women to buy their “Advanced Night Repair” serum — which comes with a collectable Pink Ribbon Keychain — but contains the hormone disruptor ethylhexyl methoxycinnamate, more commonly known as octinoxate. Octinoxate is absorbed through the skin and mimics estrogen. The health group Silent Spring advises the public to avoid products that contain octinoxate.

Octinoxate is not the only chemical of concern in Estée Lauder’s products. In fact this year, nearly every product sold under Estée Lauder’s Breast Cancer Campaign lists “fragrance” as an ingredient. Anything that is labeled “fragrance” is protected as trade secret, which means that companies are not required to disclose the specific chemicals used. Numerous studies have shown that fragrance often includes hormone disruptors and carcinogens, as well as sensitizers that can trigger uncomfortable side effects for women undergoing treatment for breast cancer. Without this basic transparency, there is no way to know all of the chemicals in Estée Lauder’s products that may increase the risk of breast cancer or interfere with treatments.

In addition to cleaning up their cosmetics, to protect consumers from chemicals of concern, Estée Lauder should join companies like Johnson & Johnson that have committed to removing 1,4-dixoane, a mammary carcinogen, from their production processes. Actions that might bring them a step closer to their self-proclaimed goal to “create a breast cancer-free world.”

It takes more than a pink ribbon to show a company really cares about women living with and at risk of breast cancer. Instead of taking steps to clean up their products and manufacturing process as part of their work to “create a breast cancer-free world,” Estée Lauder is congratulating themselves on distributing more than 150 million pink ribbons at their beauty counters and illuminating more than 1,000 landmarks around the world pink “to raise awareness.” They even hold the Guinness World Record for “Most Landmarks Illuminated for a Cause in 24 Hours.” But in our book, the only record they hold is longest running empty awareness campaign.

As Estée Lauder promotes 25 years of pink ribbon marketing, we are calling on them to stop the betrayal and stop pinkwashing. Hypocritical marketing and publicity stunts in the name of awareness get in the way of the true work needed to address and end the epidemic.

More than a quarter of million women are diagnosed with breast cancer each and every year. More than 40,000 women still die from the disease annually. And despite widespread mammography screening, estimates are between 20–30 percent of patients diagnosed with breast cancer — even at an early-stage — will eventually develop metastatic disease, which is when the cancer spreads to other organs. And women of color and underserved communities fare worse and bear a disproportionate burden of the disease. By pretending that distributing pink ribbons and illuminating buildings is meaningful action, Estée Lauder is trying to keep the focus off of the ingredients in their products that may contribute to increased risk of breast cancer and interfere with breast cancer treatments.

Women at risk and living with breast cancer deserve better.