How "American Vandal" becomes more than a dumb punchline

The mockumentary series explores the importance of moving past presumption. It's also a four-hour dick joke 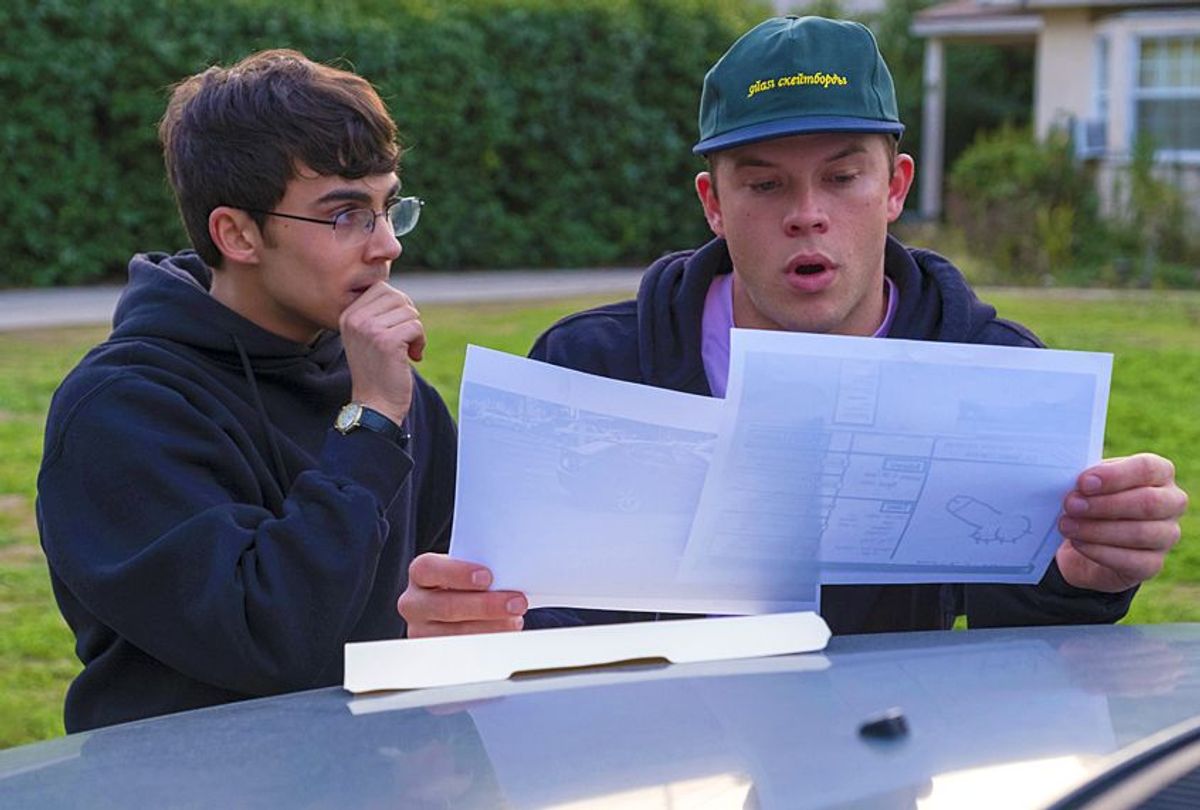 For a lot of us, our entry into a culture that reduces a person’s value to the desirability of their body parts begins in a very simple place: dirty jokes. We start hearing and repeating them in elementary school, often without the full awareness of what, exactly, they mean. All we need to know is that they’re naughty.

These whispered jests take on a new meaning as we mature and come to understand that the parts starring in the punchlines are meant to be hidden and protected. Hence the catch-all term “privates.” To expose them or depict their exposure is an obscene act of aggression. A crime. Or simply dumb.

Understandably, knowing that Netflix’s “American Vandal” is essentially a four-hour dick joke masquerading as a mockumentary immediately erects a barrier to entry. Even those of us who enjoy raunchy humor are likely to balk at the notion that such a sophomoric concept can be sustained over eight episodes without the assistance of pharmaceuticals.

Somehow “American Vandal,” currently streaming on the service, more or less succeeds in its mission to transform a story and a project that begins with an idiotic jape into an examination of the power that camera and genre have to manipulate both director and subject. And strange though this may seem, binging Tony Yacenda and Dan Perrault’s series at end of 10 days of being tea-bagged by a news cycles awash in tales of assault, abuse and structural sexism feels . . . what’s the word I’m searching for? Therapeutic, maybe.

The coverage of the rampant abuse of power in Hollywood is about a structure built to favor white males above others, a caste system based on gender politics and not specifically about the physical member associated with that gender.

Of course, untold numbers of human beings walk around with said part and somehow find a way to refrain from using it as a reason to discriminate against or debase others. They acknowledge that it has several biological purposes. The secure among them would also admit they’re weird looking enough to form the foundation of an entire brand of bawdy humor.

“American Vandal” leads with that second idea in order to lampoon the true-crime genre — yes, the very thing Netflix played a key role in popularizing. Only here, the stakes are much lower than those laid out in “Making a Murderer” or “The Keepers.” The mystery concerns finding the culprit responsible for spray-painting scarlet dicks on 27 economy cars in the faculty parking lot of Hanover High School, home of the Humpbacks.

This lends an innocent humor to a series that welcomes snickering at the immature double entendres laced throughout dialogue that’s delivered with documentary-appropriate gravitas. Even scenes that pick apart a witness’s credibility by way of establishing whether a hand-job actually occurred methodically build to a forehead-slapping denouement.

This cannot be emphasized enough: If infantile humor isn’t your thing, “American Vandal” is not for you. But if you’re the kind of person who still gets a giggle out of flatulence, it offers a return to the enjoyment of simpler inanities. Initially, anyway.

Yacenda and Perrault teamed up previously for work featured on Funny or Die and CollegeHumor. Previous to this their largest claim to fame was a dead-on “30 for 30” parody of the big game in “Space Jam” that went viral in 2013.

In the way of many mystery documentary series, “American Vandal” reveals its worth in layers. It opens with a basket of dick jokes, and Yacenda, Perrault and showrunner Dan Lagana revere and revel in every true-crime trope in establishing the story. From the boxy computer graphic recreations of scenarios to the slow zoom-ins on subjects meant to underscore the gravity of each ridiculous clue, no flourish is left unused.

But the dunderheaded jokes only obscure the story’s true intent for a short time. Through the earnest sleuthing of adolescent documentarians Peter Maldonado (Tyler Alvarez) and Sam Ecklund (Griffin Gluck), “American Vandal” quickly morphs into an allegory of perception and assumption. Eventually the pair also must reckon with the impact the project has on their subjects, and on themselves.

From the series’ outset the principal, faculty and student body are certain the perpetrator is Dylan Maxwell (Jimmy Tatro), the aggressively doltish teen terror of oceanside, California. Dylan’s raison d’etre is pulling pranks at school and around town, dedicating an entire YouTube channel to stunts he pulls with his equally dopey pals in a group called the Wayback Boys. Among their masterpieces is video of Dylan casually strolling up to babies in strollers or unsuspecting toddlers, farting in their faces and running away.

As a soloist, Dylan is a veritable Keith Haring of schlong, drawing outlines of penises on every surface that accepts ink. He’s the bane of most teachers, especially the no-nonsense Ms. Shapiro. Given that he’s none too bright, and a witness comes forth to implicate him in the dick spectacle, he’s expelled.

But Peter and Sam aren’t so sure. Plus, digging into the case makes for a worthy high school journalism project. Peter is the more inquisitive of the two; Sam is initially skeptical until Peter cites the first hole in the faculty’s case, a damning discrepancy involving pubes.

The forensic-driven mystery spirals outward from there, ensnaring fellow students, members of the faculty, employees, and parents and eventually taking on a bizarre life of its own. As the plot progresses, “American Vandal” become less about the easy lulz, veering into a relatively sincere examination of the documentarian’s oft-cited mandate to “tell the truth” and the injudicious level of trust filmmakers can place in their subjects.

Mitigating the voyeuristic discomfort of “American Vandal” is the knowledge that it’s entirely fictional, although Tatro so accurately embodies the role of a mouth-breathing dumbass that it may be difficult for him to score parts with multisyllabic dialogue for some time.

“American Vandal” also gives the audience a concentrated view of high school life and the gossip, secrets and boasts that are its social glue. This keeps its tone from getting too serious until the last episode, which, in the way of many true-crime tales, ends the story on a note of ambiguity.

Whether this turn adds depth to “American Vandal” or deflates the fun of it is purely subjective, but in either case if you’ve reached that point the creators have stuck the landing; they’ve employed childish comedy to sneak in a few smart points about blame, belief and culpability. That takes balls.