From Mueller and Russia to Kaepernick and the NFL, "collusion" is so hot right now

It may be the accusation of the moment, but it's an exceedingly hard one to prove 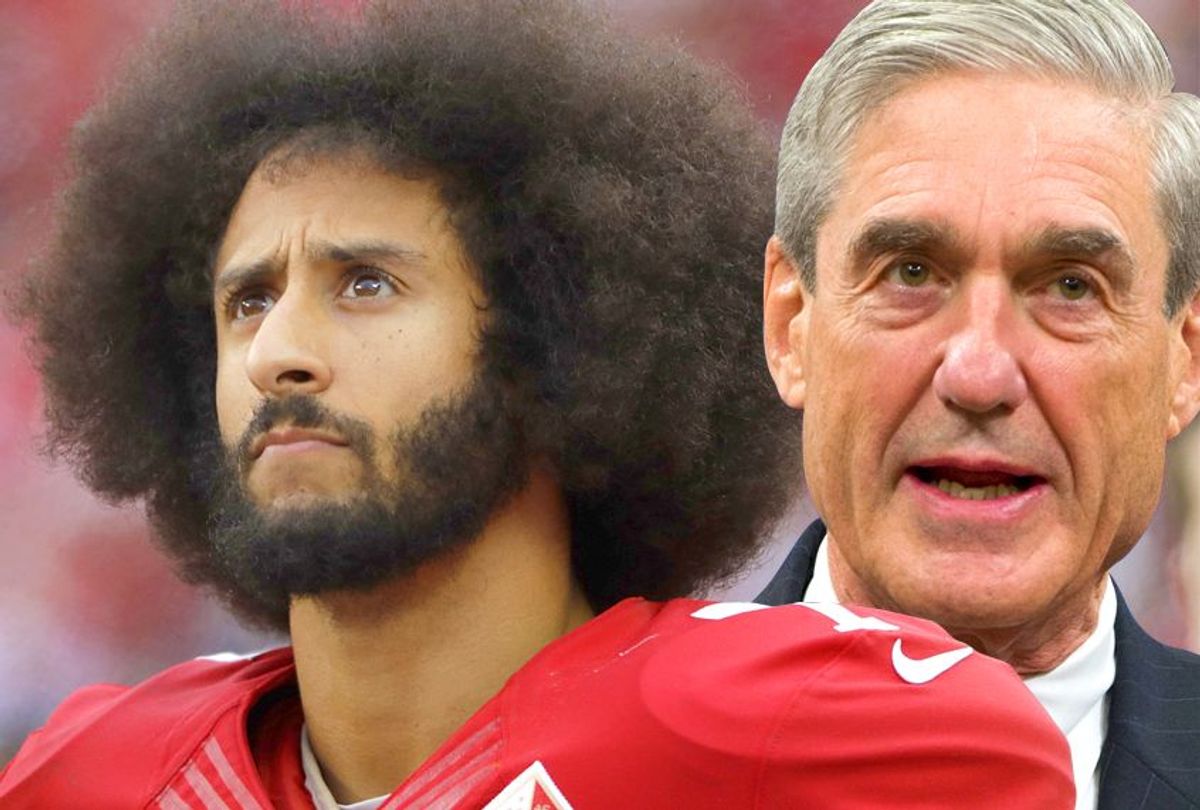 Collusion is in the air. Everybody's talking about it. For sports fans and concerned citizens, it's nearly impossible to go a full day without reading or hearing the word.

That's in part because the two most notable legal inquiries in the U.S. right now center around alleged collusion — cases so pivotal that they could bring down an entire presidency and humble even the most powerful sports league in the country.

Robert Mueller, appointed in May as a special counsel for the Department of Justice, has been investigating President Donald Trump's presidential campaign for possibly colluding with the Russian government. In a somewhat smaller corner of the legal world. Colin Kaepernick, the former 49ers quarterback who is out of the game after starting a protest movement in the NFL, has filed a grievance against the league and its 32 teams for colluding to keep him out of a job.

Unfortunately for Mueller and Kaepernick — and everyone else who wants to see either Trump or the league cowed by these charges — collusion can be a tricky issue to prove.

Mueller's probe seems to be leading him through an odd labyrinth where everything from shady real estate deals to Moscow's digital criminal underbelly lurk in the corners. To hash it all out, the former FBI director has assembled a legal dream team with expertise investigating acts that broadly fall under the umbrella of collusion.

Yet, as his team augers through all this, Mueller will have to overcome the problem that there is no specific statute for collusion. Acts of collusion could include campaign finance violations, conspiracy, bribery and fraud. But exactly what would constitute any of those is far from clear.

To complicate matters, there's further ambiguity in the evidence in statements Mueller's team is wading through. While there have been some general indicators of collusion over the past five months, most of the relevant allegations against the Trump campaign and Russia are either circumstantial or unproven.

Even the item with the strongest suggestion of collusion — the emails Donald Trump Jr. sent regarding a meeting with Russians about Hillary Clinton — was not "slam dunk evidence," according to one legal expert. "In short, the posted emails in and of themselves do not constitute 'slam dunk evidence' against all three men," Stephen Schulhofer, a law professor at New York University, told Vox. "But they surely loom large as links in a chain of adverse circumstantial evidence."

"Adverse circumstantial evidence" is of questionable value given that, in order to prove Moscow colluded with the Trump campaign, the investigation would have to provide clear evidence of intent, the hardest element to prove in any collusion case.

As well, Mueller isn't even tasked to do that — his investigation is open ended and without an imminent directive. It's a nebulous endeavor that Trump opponents are hoping will uncover a nebulous crime. Tricky.

For his part, Kaepernick will similarly have to confront just how tricky a clearly purposed collusion investigation can be.

For the quarterback to prove collusion by the NFL, he would need to show that two or more teams, or the league office and at least one team, conspired in some way to deny him an opportunity to play.

Kaepernick needs more than mere supposition or belief that he has been victimized by a conspiracy. Perhaps he has an email, text, social media message, video, audio recording, hand-written note or sworn testimony from a witness. Maybe his agents, Jeffrey Nalley and Sean Kiernan, are in possession of such evidence. Regardless, the evidence must clearly show that two or more teams, or the NFL and a team or teams, conspired to deny Kaepernick of an opportunity to play in the NFL.

Fine. But unlike the web of Trump campaign operatives and hangers on, NFL franchises and the league offices are not populated by fools. It's unlikely that a team or the league office left a paper trail indicating collusion. These are professionals, even if some of them work for the Browns.

Nevertheless, Kaepernick's attorney, Mark Geragos, seems unreasonably optimistic that he will find a "smoking gun." Indeed, he seems to feel that the general business intelligence of those involved will provide rather than hide it.

Still, it seems a long shot.

One potential saving grace for the both cases is that Trump's constant blustering tends to cough up incriminating evidence. Even Kaepernick might be able to rely on the president's past statements in order to help show that the league blackballed him, Slate's Jeremy Stahl speculated.

His argument: that the president "served as a go-between in pushing league owners" to blacklist the quarterback. Back in March, Trump hosted New England Patriots owner Robert Kraft on Air Force One. The next day, the president told his supporters at a rally in Louisville, Kentucky, “It was reported that NFL owners don’t want to pick [Kaepernick] up because they don’t want to get a nasty tweet from Donald Trump. Do you believe that?”

If Kaepernick can find evidence that some of those NFL owners discussed the potential backlash Trump would unleash for signing him, then he might have a case after all. But as Mueller likely knows, even the most damning evidence in such cases might not be enough to nail down this slippery charge.