Our silent Civil War: Debate over statues didn't come out of thin air

In history, suppressed memories, stories half-told or lied about, carry greater power for having been suppressed 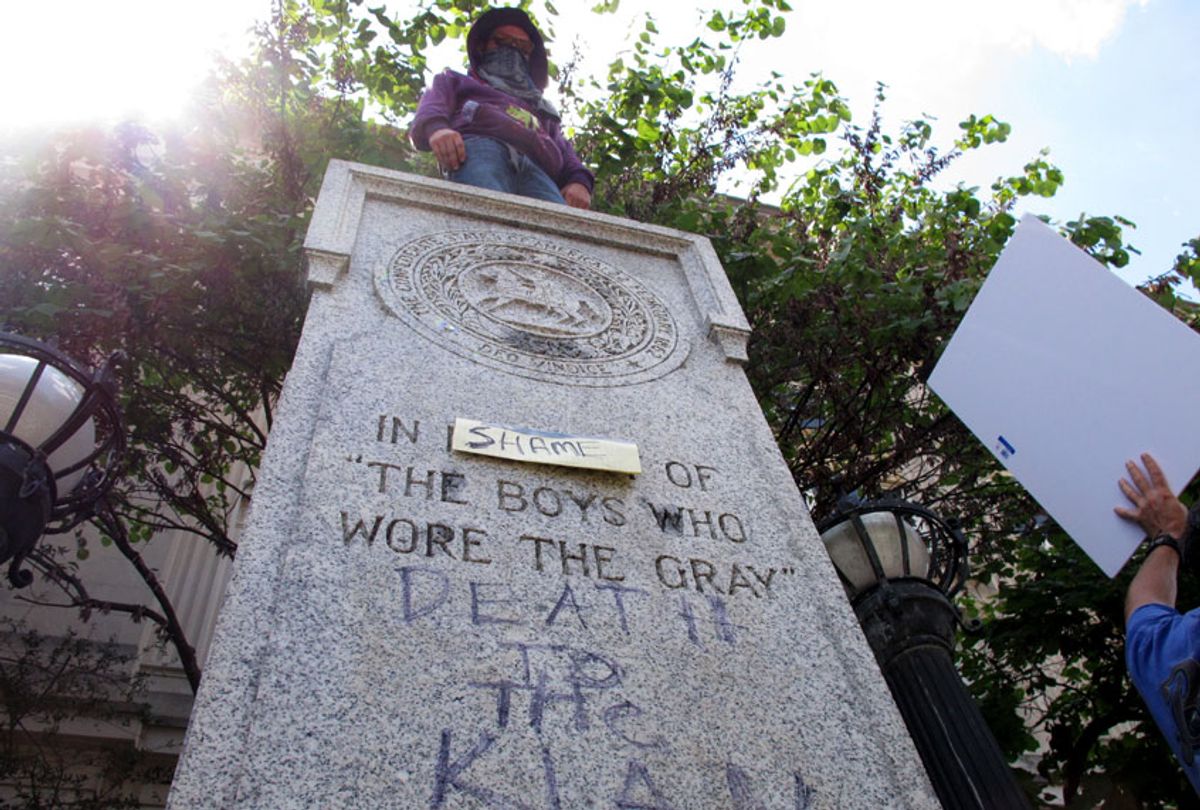 Though the first sudden and unexpected crisis of Civil War monuments has passed, communities across the North and South will struggle for months and years to confront the hundreds that remain. Debates over Civil War statues allow those statues, after a long silence, to speak to us again. It turns out that we still have things to learn from them, though not always what their builders hoped they would teach.

The statues, built mainly between 1880 and 1930, portrayed the history they commemorated in the most flattering light. Like centuries of monuments before them, the men on horseback or standing in vigilant solitude elevated leaders, ennobled soldiers and celebrated sacrifice.

They also erased history. The statues of the South, monuments to the brief military glory of the Confederacy, masked slavery and defeat. The statues of the United States, for their part, said nothing of the millions of men who refused to vote for Abraham Lincoln in the crisis of 1864 or rioted against the draft. The statues could maintain their silence on these fronts because they arose amid conversations that said what they could not or would not say. Cemeteries across the nation murmured incessantly of hundreds of thousands lives lost. Veterans, gathering in immense numbers for parades and reunions, told stories of the war to those who would listen. People remembered the way their neighbors had voted and acted during wartime.

Black people were an unacknowledged part of the conversations, an audience intended to listen but not speak. Formerly enslaved people and their descendants had built new lives amid the rubble of slavery, beneath poverty, injustice and violence. They had seen their brief moment of political power ended by the determined imposition of poll taxes, fraud and restrictive constitutions. The statues to the Confederacy built during the decades of Jim Crow reinforced the dominion over public spaces that white Southerners had temporarily lost during Reconstruction.

The meanings invested in the Civil War statues of the turn of the century slowly fell silent. Cities of carriages became cities of automobiles. As new wars demanded new sacrifices and new monuments, the Civil War statues faded from view, relics to the passions of increasingly distant decades. The Civil War itself, though more costly in lives than all of America’s wars of the twentieth century combined, became patronized and sentimentalized as a quieter war, a more human war, than the mechanized and anonymous slaughter of modern times.

Though the statues spoke less clearly to white Americans over time, black Southerners remembered what the Confederate statues were meant to say to them. The Civil Rights struggle confronted them with the resurgence of Confederate flags and celebrations of Confederate heroes. One generation of black parents after another had to explain to their children why statues of men who had warred against the United States to create a new nation based on perpetual slavery still stood in public places meant to be shared by all citizens.

Today, many Americans, unaware of the earlier conversations, express surprise at the intense debates over the monuments. The arguments by those who attack and those who defend the monuments puzzle and annoy people who see the blocks of granite and the horses of bronze as quaint, Victorian decorations of public space. To them, the statues seem so much left-over civic furniture, useless and thus harmless. They see no harm in leaving monuments that acknowledge Lee and Jackson as worthy of respect for their character and bravery, their virtues separable from the cause for which they fought.

To such Americans, today’s fights over Civil War monuments seem to come out of nowhere. Instead, those fights rise out of American history, a history full of buried force that suddenly surges to the surface when its plates shift. Suppressed memories, stories half-told or lied about, carry greater power for having been suppressed. History — apparently fixed, solid and settled — can suddenly erupt. When perpetrators of hate crimes pose beneath Confederate flags and march with torches around Confederate statues, hopes of racial justice can suddenly seem as hollow as the long-ignored statues.

Cities and towns across America will continue to confront their particular Civil War, grappling with what has been forgotten or suppressed where they live. Perhaps some communities will decide that their old memorials can be put to new uses, telling who erected the monuments, quoting the words and showing the images that defined their original purpose. Other communities may decide that the older monuments do more harm than good and that different sorts of memorials can better speak to our own time and do fuller justice to the past.

People who listen to current conversations will discover that the historical record is far richer than the few stories we have chosen from it, more monumental in scale and consequence than the statues we have built to contain it. New kinds of films and histories, new kinds of museums, new voices in our ears and new images before our eyes will do work that statues alone cannot. The defining event of our nation’s history will continue to speak to us if we will listen.

Edward L. Ayers is author of the new book "The Thin Light of Freedom: The Civil War and Emancipation in the Heart of America" (W. W. Norton and Company), and co-host of the podcast "BackStory."