Who in the hell is Bob Corker?! 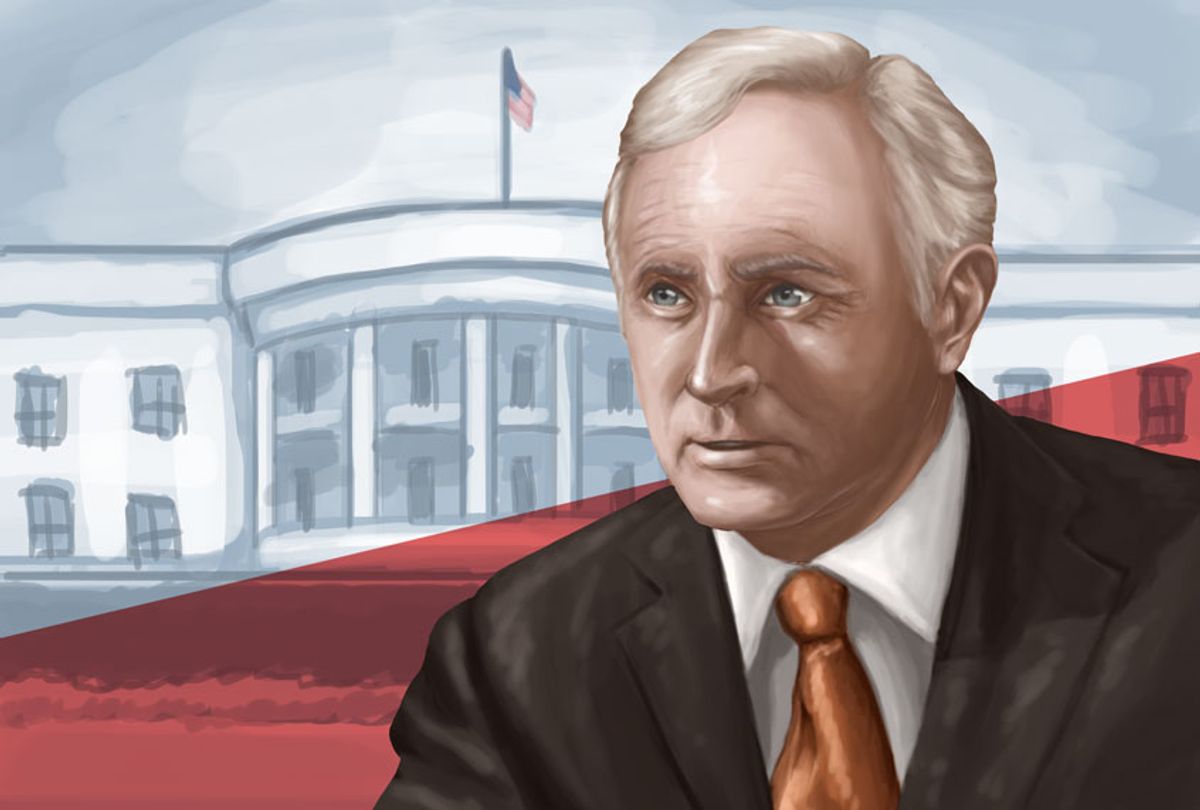 NOT SO LAME DUCK: Corker has been more full-throated in his criticism of President Trump since he decided not to run for reelection to the Senate in 2018. First, he was quoted saying Trump was “on the path to World War III.” Or worse, “The Hangover IV.”

Then he referred to the White House as “an adult day care center where someone obviously missed their shift.” Good point. You really should find a fill-in when you blow off work for a follow-up interview with Bob Mueller.

Last week, Corker said that Trump was castrating Secretary of State Rex Tillerson. To be fair, that was only because Trump didn’t have the $75 cash on him to pay Joni Ernst to do it.

The irony is Trump briefly considered Corker for his running mate, but he passed after Corker was determined not tall enough to hit the spot on the back of Trump’s head with the Aquanet.

VOL THAT JAZZ: Corker graduated from the University of Tennessee in 1974. He was a member of the Sigma Chi fraternity, where his roommate was future Cleveland Browns owner Jimmy Haslam. They were together three years, or 2 ½ years longer than any Browns coach and starting quarterback.

Corker started his own construction company in 1978. Their first big contract was with the fast food chain Krystal, where they built custom drive-through windows, pre-stamped with approval stickers from the Board of Health.

In 2005, the University of Tennessee Chattanooga named him to their “Entrepreneurial Hall of Fame.” He was inducted with a man who successfully got the zoning approved to open an all-night pharmacy in the master bathroom at Graceland.

I APPROVE THIS MASSAGE: In 2006, Corker won election to the Senate over Harold Ford, Jr., helped largely by an attack ad which featured a white woman leering over the unmarried African-American Ford. The ad, known as "Harold . . . Call Me," was roundly denounced. Not for its overt racism, but because the campaign forgot to include the disclaimer "roaming charges may apply."

After the Republicans took control of the Senate, he became chairman of the Senate Foreign Relations Committee. In ten months, he has sent over four dozen Hickory Farms “Please Forgive My Boss” meat and cheese samplers to Angela Merkel.

I’M RIGHT, I’M RIGHT: In February, 2010, Corker was the only Senator to back the retiring Jim Bunning in filibustering a 30-day extension of expiring Cobra benefits. When Bunning died last May, in appreciation, during the funeral procession. Corker had the hearse wait in the parking lot of an ER for 18 hours.

In 2011, Corker referred to Social Security and Medicare as “generational theft.” And last month, he renamed the opioid epidemic “ConJunkieTivitis.”

In 2013, weeks after the Newtown massacre, Corker was one of 46 Senators who voted against a bill which would have expanded background checks. However, Corker did co-sponsor a bill, also defeated, which would have everyone take off their shoes and belts when entering a gun show.

AND THEN AGAIN, MAYBE YOU’RE RIGHT: In 2013, Corker joined Democrats in favor of immigration reform. Although he was not part of the Gang of Eight, he was part of a support group GangAnon.

Corker was one of eight Republicans in Congress who believe that global warming is real and man-made. The other seven recently told Steve Bannon they used to believe it was a hoax until they went to a birthday party at Al Gore’s and a hypnotist put them under.

PRESIDENT TRUMP ON CORKER: “Never met him. Never heard of him. Never saw him. Little guy. Little different. Good guy, became a bad guy. Don’t know what happened. Maybe he couldn’t go on a ride at an amusement park. That’s what I heard. I heard he went up to the sign, he didn’t make it, he’s tiny, and now it’s my fault. I didn’t put that sign up. We all know who put the sign up. We all know. President Obama. I just heard somebody say it. Okay, it was me. But I am somebody. I am somebody. You know who said that? No, not Jesse Jackson. Not Jesse Jackson. Excuse me, not Jesse Jackson. Who’s that, Peter Alexander. How tall are you? What’s that? Nothing? I thought so. I invented that expression. First day of military school. Some drill sergeant/pastry chef said, 'I bet you think you’re somebody, don’t you, Trump.' And I said, 'I am somebody.' And everybody heard it, and the wires all picked it up and never credited me, which is what they do if we still had wires. So, President Obama made the sign, Jesse Jackson never said that, and you can call everyone at the military school. Which I have.”

REPRO MAN: As recently as the late 1990s, Corker was pro-choice, but now believes life begins at conception, or after the check from the Koch Brothers clears. He opposes abortion on demand, and Cinemax After Hours OnDemand. He is pro-life, except when the life of the mother, or the campaign, is in danger.

Bob Corker Comedy Editor's Picks Satire Who In The Hell Is