First Hayao Miyazaki shakes off retirement, then a DVD compendium of the master's entire catalog is released 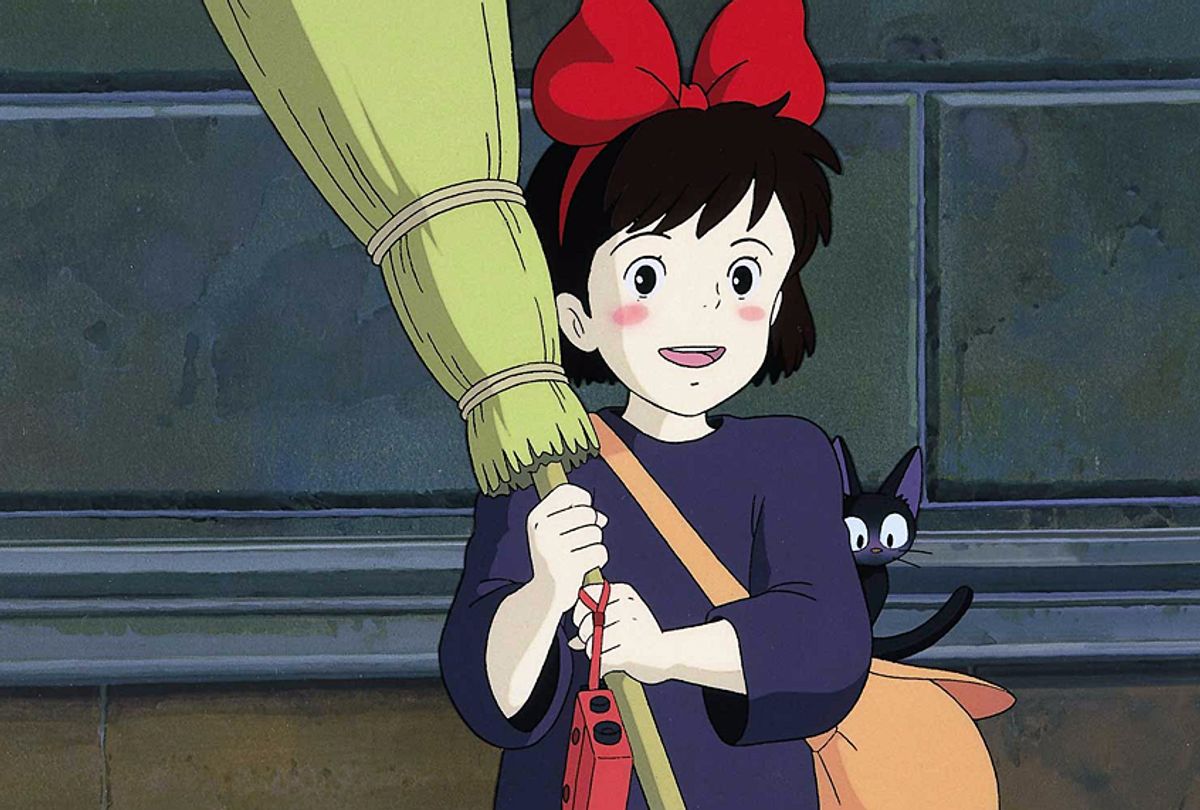 For film aficionados and enlightened 12-year-olds alike, who have felt a little dead inside ever since the brilliant Japanese animation director Hayao Miyazaki announced his retirement and left us with his relatively flat 2013 “farewell” film, "The Wind Rises," there are now two reasons to rejoice. First, this month, Gkids is releasing a new set of his and his studio’s films in a neat, crisp DVD collection. Second, word has leaked that the master is coming out of retirement (again) to adapt a short film, "Boro the Caterpillar," into a feature, which will hopefully be in theaters by 2019.

Until then, Gkids’ collection of Studio Ghibli movies will have to satisfy. And they should. (Gkids also occasionally shows Miyazaki’s films nationally in theaters through Fathom Events.) The Blu-ray versions pop with Miyazaki’s rich colors and detailed artistry. The DVD bonuses also don’t disappoint, providing ample interviews with the director and his team, and pulling the curtain back on his process. There’s also a refreshing lack of self-promotion within the DVD set; you can quickly navigate to the films that you want to see without any fuss.

If you’re new to Miyazaki, start with the charming "My Neighbor Totoro," a sweet, but never saccharine, tale of two girls who stumble upon some friendly wood spirits. Next, watch his masterpiece, "Spirited Away," which won the Oscar for Best Animated Feature in 2003.  The film is an epic tale of a girl’s adventure into a fantasy world of spirits. From there, explore Miyazaki’s worlds of whimsy and wonder — try "Ponyo" or "Princess Mononoke" or "Howl’s Moving Castle" — filled with strong themes centering around coming of age, the power of imagination, environmental awareness, and moral ambiguity.

Salon put some questions to Gkids' president, Dave Jesteadt, about Miyazaki and the new DVD collection.

How do you describe a Miyazaki film to someone who’s never heard of him?

Hayao Miyazaki's films, and really Studio Ghibli's as well, are some of the most purely enjoyable cinema in existence, animated or otherwise. Many of these films can be viewed and appreciated by all ages precisely because they do not talk down to kids, and therefore have just as much to say to adults. It is rare to find true villains, only humans or characters with different, complex and competing interests. Their films typically have strong and relatable female heroines and protagonists, decades before that become something mainstream films were paying closer attention to. And of course, they frequently demonstrate a strong interest in environmental themes, and concern for the world around us, and the way we interact with it. All of this may sound like the films are great because they tick off certain "progressive filmmaking" boxes, but the truth is that all of these elements combine to create stories and films that are uniquely human and universal, even when they are set in the most fantastic worlds.

Do you think it’s accurate to describe him as the “Japanese Walt Disney”?

It makes sense in that both Hayao Miyazaki and Walt Disney are trailblazers in the animation medium, and studio founders (or co-founders in Miyazaki's case, alongside his studio partner and fellow director Isao Takahata). I think that makes sense. Both have also made wildly popular entertainment for their respective markets. But I think Hayao Miyazaki and Studio Ghibli also can't be defined solely within binaries or comparisons to Hollywood and American animation, as they have pushed the medium forward in very different but equally effective ways.

Which of his films do you recommend as a first to watch, and why?

Tough question! I think for myself, like most people, the easiest recommendation is likely the first Studio Ghibli film you saw, as that typically holds a special place in the heart. In my case, that's "My Neighbor Totoro," which I had as a kid on VHS. "Totoro" embodies so much of the Ghibli ethos and appeal, the idea of a film that is deeply appealing to kids, with extremely cute characters and playful sisters and this sense of open-eyed wonder and discovery, and then the film changes and deepens as you grow older. Watching now as an adult, I see more of the parent relationships and the subtle drama in the background, the sense of melancholy, which informs and deepens the interactions with the still-adorable forest creatures, and the reasons for their existence.

For every new re-release in the catalog, we went back to the archives and worked closely with Studio Ghibli, to try to ensure we can have the best possible releases. Each film has a new video transfer, which we try to max out on Blu-ray, and then Studio Ghibli-approved subtitles, both for the original translations of the Japanese audio as well as dubtitles for the English audio. For bonus features, we took everything available, which on some films are approximate to the previously available Disney releases, while on other films, like "Ponyo," "Howl's Moving Castle" or "Nausicaä of the Valley of the Wind," yielded hours of interviews, TV specials, press conferences and other items that Studio Ghibli made available to us. Finally, we are including an essay booklet with every Blu-ray re-release in the series, which includes filmmaker statements, and making other adjustments to the packaging to try to highlight the studio's remarkable artwork.

Would you say the new release is for someone new to Miyazaki or for those of us who’ve been fans for years?

Hopefully both! Obviously our titles are a great starting point for new fans to discover the films for the very first time. I am sensitive to existing fans and collectors debating whether to double-dip, and I hope that we make a convincing case that the re-releases are worthy of replacing or updating existing collections with. These are incredibly important films to me personally, so we have done everything possible to ensure we have put together the best releases these films can get. When I was reviewing some of the new bonus features, like interviews with crew or directors or new interviews with Miyazaki, as a long-time fan I started to get really excited about what I think longer-term fans can glean from the additional bonus, which may not be immediately of interest to families or brand new viewers. But if you are a Studio Ghibli fan, the unvarnished peek behind the curtain that they frequently provide is fascinating.

How aware would you say is the American movie-going public of Miyazaki’s films?

I think many Americans do know a Studio Ghibli or Hayao Miyazaki film, but what we have seen is that there is not always that broad awareness that the films are related to each other. That someone who is aware of "Spirited Away" is always aware of "My Neighbor Totoro," or that someone who knows "Ponyo" knows about "Howl's Moving Castle." Or heck, to go beyond Miyazaki's films and discover some of the remarkable achievements of Isao Takahata, or some of the deeper cuts in the Studio Ghibli catalog. That's one of the exciting things about being able to present the collection, whether it's on home video or in theaters, in a way that encourages audiences to go beyond their favorites and deepen connections between pictures.

The theatrical performance I think is largely attributable to the type of releases the films have received, which range from specialty arthouse releases to the smaller end of wide releases. Their performance within those spaces has always been met with enthusiasm, so I think it's less a question of Americans rejecting Studio Ghibli films, and more the decision-making process about what kind of theatrical release makes sense for the films, given the guaranteed reception on home video no matter what. The DVD and Blu-ray sales of the top titles have remained very consistent year-on-year, as they are still one of the only legitimate ways to experience the films, and my hope is that we can continue that with the new collection, as well as drawing attention to some of the lesser-known titles, which are ripe for discovery and reappraisal.

Have Miyazaki’s films ever been available for streaming? What’s the prospect that they will be in the future?

No, the Studio Ghibli catalog remains unavailable on digital platforms like iTunes, or on streaming services like Netflix or Amazon Prime Instant. It's something we have discussed with them, particularly as there are now younger generations (and older) that see movies almost exclusively through these platforms, and no longer cultivate video collections like they used to. Perhaps it is something they will allow in the future. For now, I respect their reasons for wanting as much control as possible over how fans experience their films.

How do you think Miyazaki’s films have influenced the genre of animated films in the U.S.?

Hayao Miyazaki and Studio Ghibli collectively have had a tremendous impact on U.S. animated filmmakers, seen most notably with Miyazaki's relationship with John Lasseter at Disney Pixar, as well as other Pixar filmmakers. There is a deep knowledge and respect for Ghibli's films throughout the animation studios, so you'll catch a fair number of in-film jokes and references to "Totoro" and other titles, and I think many feel inspired by what he has been able to create.

In 2003, Miyazaki won the Oscar for Best Animated Film but he didn’t attend in protest of the U.S. bombing Iraq. Do you think that that had an impact on his later treatment by Hollywood/Disney?

I don't think so. Studio Ghibli's films were still distributed by Disney; they received several more Oscar nominations (for Hayao Miyazaki on "Howl's Moving Castle' and "The Wind Rises," for Isao Takahata on "The Tale of the Princess Kaguya," and for Hiromasa Yonebayashi for "When Marnie Was There"), and then he was awarded the Academy's Governors Award over a decade later, including a moving speech by John Lasseter about the inspiration Miyazaki provides to the global animation community. Every year, their films continue to grow more in prestige and awareness among audiences and critics, many who had a limited relationship or awareness of the studio prior to "Spirited Away." So I don't think it had any impact on their treatment with Hollywood or the U.S. market. Separately, one thing I really respect about both Hayao Miyazaki and Isao Takahata is their willingness to speak openly and forcefully on social and political issues, without concern for whether this would "politicize" or damage the studio's brand. They have been very active within Japan on issues of militarization and national politics, in a way that demonstrates the themes and concerns of their films are come by honestly. It's refreshing . . . and of course, years removed from some of the jingoistic language around the initial bombing and invasion, voices opposed to war are once again proved prescient.

What can you tell us about Miyazaki’s upcoming, out-of-retirement film? Is it "Boro the Caterpillar'? Is it computer animated? Will it be awesome?

I can't tell you anything really beyond what is out there on the internet. It's supposedly happening; they are hiring animators. It seems to be computer animation. And I look forward to seeing it when it's completed! They keep all of their projects very close to them until they are nearly complete, so we'll likely be waiting alongside everyone else for footage or a hint of what the film will be like.