One nation, in sickness and in health

"Repeal and replace" has proven repeatedly to be a farce, focus on the hard work of true reform and get health care 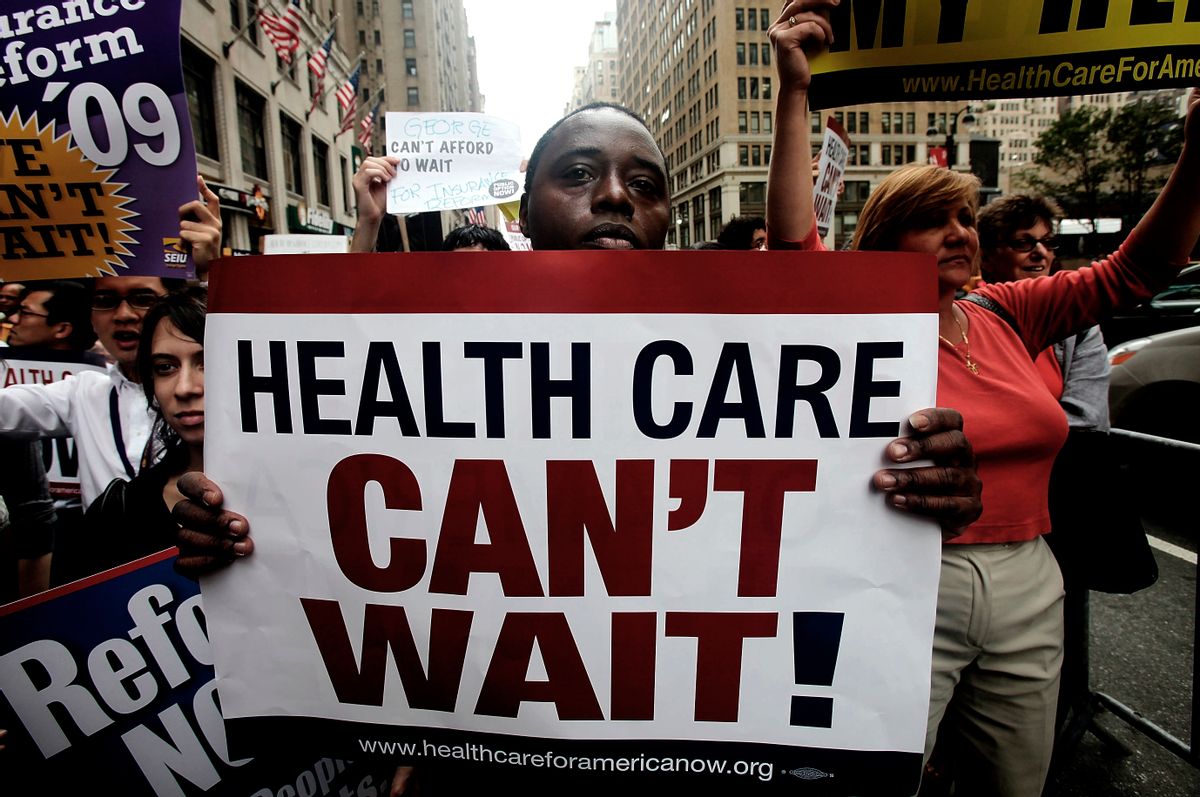 A couple of things observed after successful surgery and a week in the hospital:

Which is why it’s so infuriating to compare the true public service of these men and women to the man who is supposed to be our public-servant-in-chief — he who insists on trying to torpedo Obamacare and on running our country and government into the ground by fomenting policies fueled not by duty or patriotism but by incompetence, ego and petty vindictiveness.

It’s a given that our health care system, one-sixth of our nation’s economy, is a nightmare. And that despite my encomiums of praise for the medical profession stated above, there also are stinkers out there quick to abuse the system and make a big fast buck, especially in the pharmaceutical and health insurance industries.

Yet while Obamacare is a deeply flawed program — ultimately, single-payer is the way we must go or face economic and social ruin — it still has been a step in the right direction (“the end of the beginning of the reform we need,” in the words of advocate Wendell Potter), and could in some ways be patched until we yield to the obvious and make universal health care a right for every one of us.

But no. Dear Leader, frustrated by the Republican congressional majority’s repeated inability to repeal and replace Obamacare, decided to take matters into his own hands and issue executive orders that make a mockery of medicine’s guiding principle: First, do no harm. And all to take revenge on his predecessor, whose name he believes must be expunged and thrown down the memory hole.

One executive order allowed cheaper policies but fewer protections and benefits. The other cut subsidies to health insurers that help cover the costs of medical insurance for low income individuals and families, resulting in projected premium increases of up to 25 percent by 2020 and, according to the Congressional Budget Office, costing the government $194 billion over the next 10 years. Genius.

As Sarah Kliff at Vox observed, “This is a policy that helps nobody and hurts millions.”

But at his Monday Cabinet meeting, Trump brayed, “Obamacare is finished. It’s dead. It’s gone. You shouldn’t even mention it. It’s gone. There is no such thing as Obamacare anymore.”

Yet like so much of Trump’s bragging, it wasn’t so. Or so we thought. Democratic Sen. Patty Murray and Republican Sen. Lamar Alexander came forward with a bipartisan compromise that restores the subsidies for a couple of years but also yields to conservatives and gives states more leeway in regulating health plans. Trump seemed to say he supported it. And then he didn’t. What’s more, many conservatives, especially in the House, are opposed. So… more mayhem.

All of this is reflective of what commentator Andrew Sullivan calls “nihilist, mindless reactionism.” The president, Sullivan writes, is “a reactionary fantasist, whose policies stir the emotions but are stalled in the headwinds of reality. He can’t abolish Obamacare because huge majorities prefer it to any Republican alternative, so he is sabotaging it.”

On the campaign trail, Trump bragged how he would immediately “terminate” Obamacare and replace it with something “really, really great that works.” But if for some reason you don’t know by now, he’s all radio talk show bombast and no substance. To fix our health care system requires hard work, study and a solid determination to create something that serves the collective need and protects each of us at our most vulnerable. There’s no evidence of that hard work happening in the White House or on Capitol Hill.

As I’m recovering from my time under the knife, I’ve been reading "Keeping On Keeping On", the latest volume of diaries and other ephemera from the English playwright and essayist Alan Bennett. Now in his 80s, one of his bête noires is conservative attacks on Britain’s National Health Service.

“The word patient means a sufferer,” Bennett writes, “and when someone comes to the doctor they are coming not because they want to buy something but because they want help. Structure and restructure the Health Service how you will doctors are not shopkeepers, patients are not customers and medicine is not a product.”

A hospital stay has a way of making you focus and realize things about yourself and the structures that keep us alive and well. Proper medical care for all should be a boon to our society, a miracle of public policy that sustains and protects. Mindless cant and empty braggadocio are not policy. They’re a disease that threaten the health of the nation. And Mr. Trump, you’re the Typhoid Mary spreading the contagion.