Why is the media reluctant to cover neo-Nazi violence?

Shooting by white supremacists at Richard Spencer's Florida event wasn't a one-off. It's part of a larger pattern 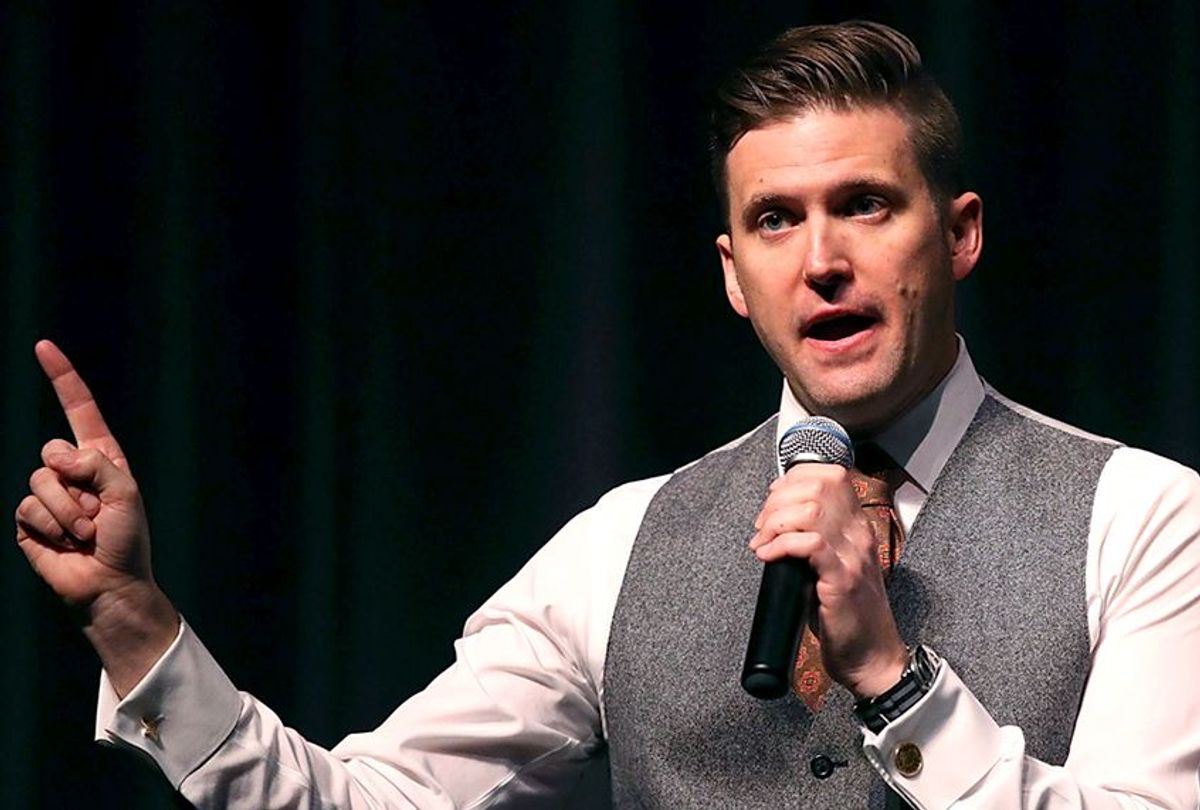 It's been just a little over two months since a white supremacist rammed his car into a crowd of anti-fascist protesters and killed a woman in Charlottesville, Virginia. It seems as if the mainstream media has already gotten bored with the story of neo-Nazi violence and domestic terrorism. Leading white nationalist Richard Spencer snagged a huge amount of coverage for scheduling a speech at the University of Florida, which provoked stories about how much the school was spending on security, the potential for protests and the fact that the state's Republican governor felt compelled to declare a state of emergency. But when three of Spencer's biggest fans and core followers — their names are Tyler Tenbrink, William Fears and Colton Fears (the latter two are brothers) — were arrested for attempting to murder protesters, coverage of the event was relatively sparse.

Media Matters analyzed the news coverage of the incident, in which one neo-Nazi allegedly fired a gun while the other two egged him on to shoot protesters. The watchdog group found that cable news networks almost completely ignored it. CNN and Fox News didn't mention the alleged attack at all, and MSNBC devoted a two-minute segment to it on one show.

Angelo Carusone, the president of Media Matters, told Salon he didn't believe the incident necessarily deserved "hours of coverage over a few days." But the paltry coverage the alleged attack got, he worries, may contribute to the public's failure to understand how serious the threat of neo-Nazi violence really is.

Vicious attacks on anti-fascist protesters have happened on at least two occasions since the events in Charlottesville. In an early September rally in Vancouver, Washington, there were reports of threatening behavior from motorists, with one man driving into a crowd (fortunately injuring no one), and a group of men in another car throwing things and driving menacingly around the protesters. Then there was this latest shooting associated with the Spencer event in Florida.

Just because no one has gotten hurt doesn't mean this isn't news. It's sheer luck that separates a bullet that hits someone in the head from one that doesn't. More importantly, Americans need to see the pattern of violent behavior coming from the white supremacist subculture, to understand the threat it actually poses.

Incidents like these “really underscore the risk a lot of people talked about when it comes to these rallies, and about what these groups actually bring when they hold these events," Keegan Hankes, a researcher for the Southern Poverty Law Center, told Salon.

Hankes emphasized that white supremacy is an inherently violent ideology, noting that "you don't have the 'ethno-state,' you don't have this kind of world that they're dreaming up without extreme violence.”

As far-right fringe groups, emboldened by the election of Donald Trump, plan more rallies and public speeches, there's a real risk that the centrality of violence to white supremacist ideology gets lost in the public discourse. Part of the problem is that right-wing pundits have been working to frame the challenge posed by these groups strictly in terms of "free speech" while minimizing the problem of actual or potential violence.

“The security concerns are justified, as we see, because violence follows" where neo-Nazis and white supremacists go, Hankes said. "It's more than just that people don't want to hear their ideas or don't agree with them, and don't think they should be on campus."

Carusone characterized himself as a "free-speech purist," but felt that the public's understanding of the debate over speech on campus is incomplete if they don't understand the enhanced possibility of violence that white supremacists bring.

"Alt-right" groups, he explained, "do these sort of trolling events at campuses, not trying to make a point, but just to elicit a backlash, so that they can have these kinds of skirmishes. The net effect of the skirmishes is to create conditions such that they can not just engage in violence but also bully, intimidate and suppress their opponents.”

That too, he noted, is a free speech issue: The free speech rights of anti-fascists and leftists are endangered if they are being intimidated with violence.

White supremacists and other "alt-right" types have deliberately downplayed their own acts of violence in an effort to confuse the issue, Hankes said. Instead, they focus on a narrative claiming that they "just want a fair hearing for [their] ideas" and that it's "the anti-fascists who are committing violence," permitting them to play the victim and drum up sympathy for their extremist views.

Spencer himself did this during his speech at the University of Florida. When an audience member asked Spencer about the killing of leftist protester Heather Heyer, for which a white supremacist named James Fields has been charged with second-degree murder, Spencer deflected and downplayed the situation. He claimed he is opposed to all forms of violence and has "explicitly called for peace."

He then began to make excuses, calling Fields a "scapegoat" and saying that Heyer's death was an "ambiguous situation." He also claimed that Fields' "vehicle was attacked," and suggested that ramming a car into a crowd of protesters was Fields "attempting to escape."

Shortly after Spencer tried to spin his movement as nonviolent, three of his most prominent followers — men who have repeatedly attended Spencer's appearances and events, including the Charlottesville rally — reportedly fired a gun at protesters while shouting "Heil Hitler" and urging each other on.

The media has an important role to play here. It's not just about reporting on events like this, but also putting them into context. The shooting was part of a growing white supremacist movement that is growing ever more ambitious and more violent, and feels emboldened by a sympathetic leader in the White House. This shooting happened during a constant churn of stories about Trump's racially provocative attacks on NFL players, Rep. Frederica Wilson, Myeshia Johnson (the widow of slain soldier La David Johnson) and ESPN sports analyst Jemele Hill. It's no mystery why white supremacists might feel it's a good time to ramp up their activities. This shooting cannot be viewed as a random crime, but as the inescapable result of electing President Donald Trump.