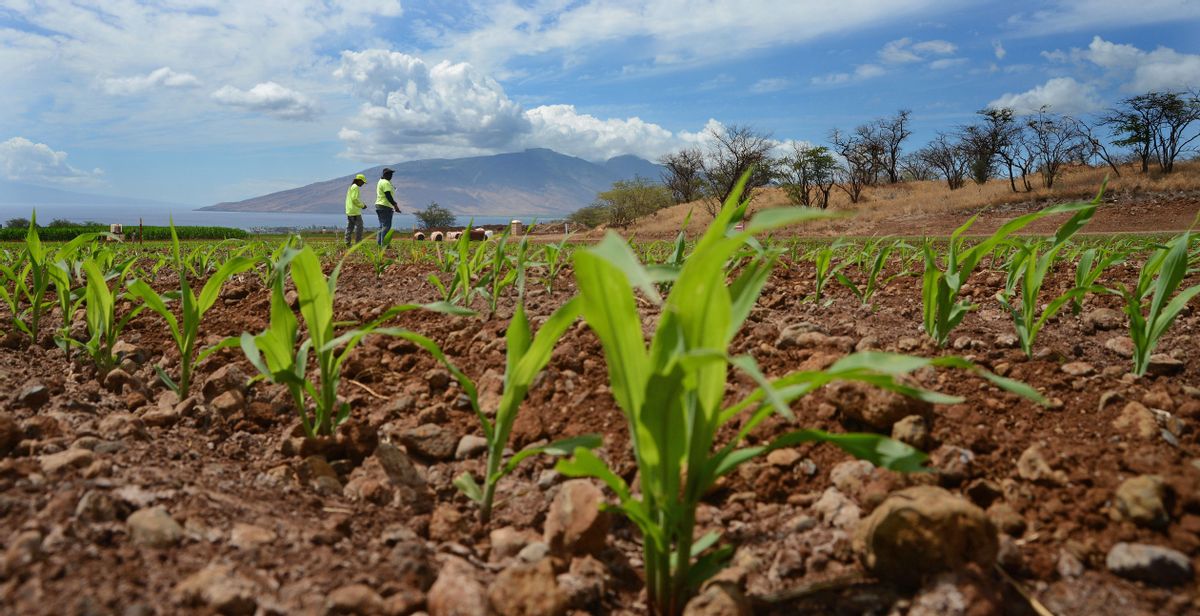 On Thursday, the World Food Prize will be ceremoniously bestowed on yet another cheerleader for degenerative agriculture.

This year’s award goes to Akinwumi Ayodeji Adesina of Nigeria, president of the African Development Bank, and a proud supporter of Big Ag and Biotech. In his words, Adesina says he works to "help farmers rise to the top of the value chain by industrializing agriculture."

In the lead-up to World Food Day (October 16) and Thursday's ceremony, I’ve received a series of emails with the subject line, “How Iowa is feeding the world.” The email invitations contain glowing praise for industrial, degenerative agriculture — the type that kills healthy soil life, has ruined Iowa’s water and produces pesticide-contaminated food.

"...in Iowa, solving global hunger is business as usual, from being the #1 producer of pork, soybeans and eggs, to the cutting-edge bioscience research being conducted at the state’s universities, to groundbreaking technological innovations applied in the farms and fields — Iowa has a long legacy of feeding the world."

Iowa is in fact home to many good farmers. Farmers who work with nature, not against it. Farmers who steward their lands, and grow nutrient-rich, uncontaminated food — without benefit of the huge taxpayer-funded subsidies granted to their GMO monoculture counterparts.

But those aren’t the farmers who are ever awarded a $250,000 World Food Prize. Because those farmers aren’t generating big profits for corporations like Monsanto.

No, the farmers and “thinkers, scientists and advocates of global food security” who are gathered in Des Moines this week aren’t so interested in regenerative agriculture. And, as one new report after another reveal, the only thing they’re feeding the world is a slick PR campaign, founded in lies.

The truth about who’s really feeding the world (spoiler alert: it’s not industrial ag) was published this week by the nonprofit ETC Group in its latest edition of "Who will Feed Us?" But before we get to that, it’s worth pointing out, again, that lack of food isn’t the root cause of world hunger.

According to multiple sources, including Mercy Corps: "There is now 17 percent more food available per person than there was 30 years ago. If all the world's food were evenly distributed, there would be enough for everyone to get 2,700 calories per day—even more than the minimum 2,100 requirement for proper health."

So why do 795 million people (one in nine) go to bed hungry every night? Because the food being produced doesn’t get distributed to them — and even if it did, they couldn’t afford it.

Poverty and distribution are the root causes of hunger. And as Pope Francis said this week, the link between climate change (of which industrial agriculture is a major contributor) and hunger is “undeniable."

What exactly is the World Food Prize?

Today, the “World Food Prize” is a public-private partnership between the state of Iowa and numerous multinational agrichemical corporations, including Bayer, Dow, Dupont, Monsanto and Syngenta. World Food Prize events happen on or around October 16, to coincide with World Food Day, the annual celebration of the founding in 1945 of the United Nations Food & Agriculture Organization (FAO). The FAO uses World Food Day as a call-to-action for countries to meet Sustainable Development Goal (SDG) #2: Achieve Zero Hunger by 2030.

According to its official website, the World Food Day Prize is “the most significant observance of World Food Day anywhere around the globe.” Yet interestingly, there’s no mention of the prize on the United Nations Food and Agriculture Organization (FAO) website, where you think something so “significant” would bear mention by the originators of World Food Day?

Who really feeds the world?

At a recent dinner party, the subject of Monsanto and GMOs came up. Several of the well-educated and well-read guests asked: But without GMOs, how will we feed the world?

Clearly, Monsanto has excelled at getting its (false) message out. Which means that we have to work harder at getting out the facts — many of which are laid out, and meticulously researched and documented, in ETC Group’s latest publication.

In honor of the real World Food Day, please share some of the facts, brought to you by ETC Group:

The bottom line? According to ETC Group, at least 3.9 billion people are either hungry or malnourished because the industrial food chain is too distorted, vastly too expensive, and — after 70 years of trying — just can’t scale up to feed the world.