Season of the witch: "Broad City" pays tribute to women of every age 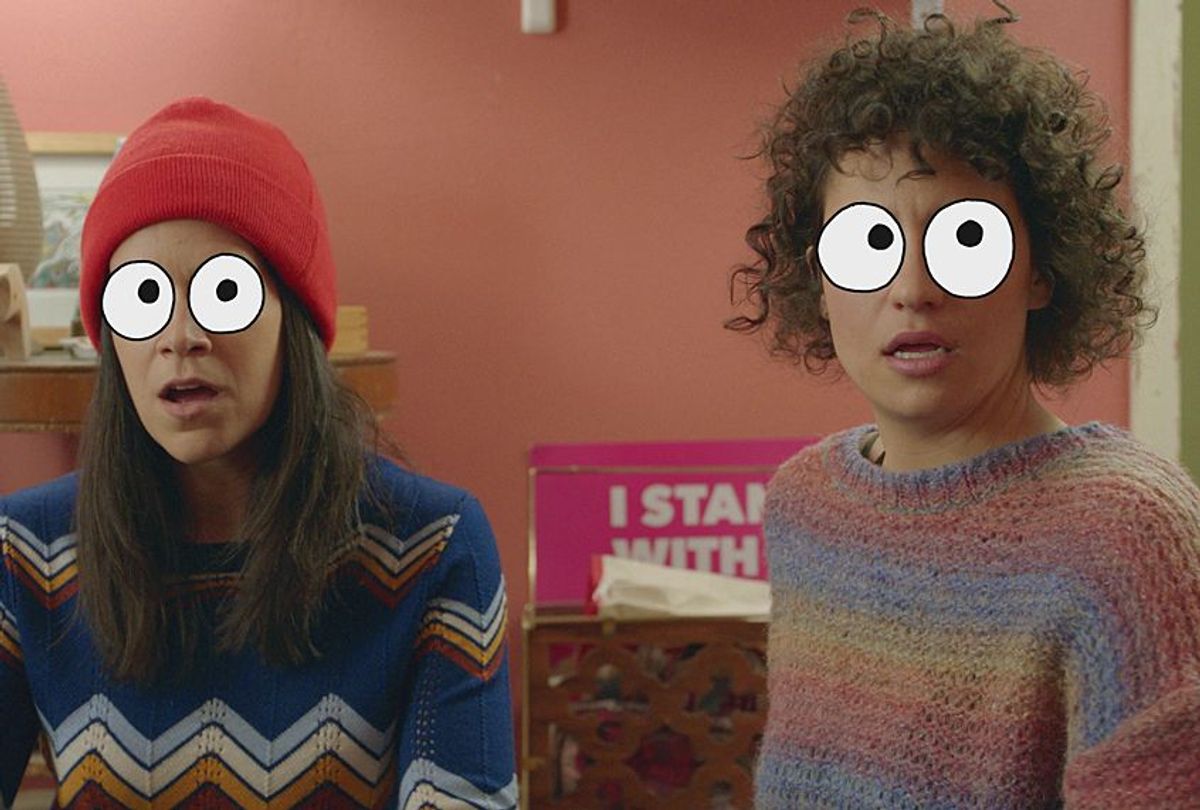 Witches understand the value of curses. Hundreds of years ago they were spoken in strange, otherworldly languages. These days Ilana Glazer and Abbi Jacobson believe we see an especially vicious curse hanging in glowing letters over skylines and uttered hundreds of times a day.

Being the great and powerful media sorceresses that they are, they’ve responded with a counter-spell, bleeping out all mentions of He the Series Refuses to Name in the latest season of their Comedy Central series “Broad City.” You may find the censorship bleeps to be particularly prominent in Wednesday’s Halloween episode – titled, appropriately enough, “Witches.”

Given the events of the last two weeks, knowing the “Witches” episode was written a year ago may seem like an act of augury. “We have one or two scripts a year that we rewrite like five times,” Glazer said.  “And this witches' one was rewritten four times . . . And then we had a hiatus, and the fifth time was in December after the election, after two or three months of distance which we'd never had before.

How were Glazer and Jacobson to know that “Witches” would air not two weeks after Harvey and Bob Weinstein would be brought down by sexual harassment charges, causing a domino effect in the industry resulting in the toppling of some of Hollywood’s most powerful?

And there’s no way they would’ve had a clue that Woody Allen would weigh in, vocalizing his concern about the rise of what he termed “a witch hunt.” To which New York Times columnist Lindy West replied, “Setting aside the gendered power differential in real historical witch hunts . . .  Sure, if you insist, it’s a witch hunt. I’m a witch, and I’m hunting you.”

“Broad City” airs Wednesdays at 10:30 p.m, and has always been right on time with its humor, and often ahead of schedule. Glazer explained that she noticed a new fascination with magic among women in their 20s.  “I see a lot of Instagram accounts that are like, ‘witchy.’ Like, ‘here’s a spell,’ and ‘check out my crystals,’ and I dig it. There was something to harness there. And I'm so, so glad we found in an organic way, because it wasn't happening.”

Now that it is, we may find “Witches” to be precisely the potion so many of us need, in no small part due to its twin themes of aging and the widespread side-effects that Pumpkin Voldemort has had on women of the world, such as casting a blanket avada kedavra our ability to freely climax.

Yes, this is the famous anorgasmia episode previewed prior to the season’s kick off, and it’s also the episode that specifically points to You-Know-Who as the root and the symbol of woman’s woes while consciously rebuking him.  Glazer and Jacobson made that choice as a way of claiming another type of currency.

“Airtime is political,” Glazer declared in a recent interview with Salon. “Airtime is shaping reality, and we have been able to grasp that and harness it more and more over the four or five years. We all take in so much content even when we're trying to avoid it. So, you know, we're really hoping the highlight the comical reduction of our president and how hard women have to work to be heard and seen.”

Far greater than the presence of Carrot Caligula, however, is the celebration of the gender he and his party seem hell bent on crushing. In “Witches,” which Jacobson directed, the story merges harsh realities about sexuality and aging with an attainable fantasy of women taking back the act of maturity with a sense of joy and are reverence.

“It’s also about this industry, too,” Jacobson added. “It treats aging like it’s horrific. And it's not. It shouldn't be seen as that.”

At various points Ilana Wexler (Glazer), the more unapologetically libidinous of the duo, holds a mirror to her vagina as an act of therapy, while Abbi Abrams (Jacobson) is confronted with the fact the she’s getting older — an idea she’s none too excited about.

Ilana, however, noticing Abbi’s first gray hair and rejoices in it.

“Don’t you see? You’re becoming a witch — a dope and powerful f—king witch!” Ilana tells Abbie. Even Abbi’s ever-present freeloader pal Bevers (John Gemberling) gets in on the celebration. "Like Dame Judi Dench and Stacy London from ‘What Not to Wear’ before you,” he whispers excitedly, “you’re ascending!”

“With the word witch, we're really infusing positivity in it,” Jacobson said.  “But we couldn't find where to do it. Sometimes it takes a while to find the organic way in.  And then it all just came together in this great way.”

Well, maybe not the greatest way, since the impetus was the world’s reaction to the political rise of Mad King Yam.

Don’t forget that this is still “Broad City” and the New York of 2017. Life hasn’t transformed overnight with a wave of the wand and a “bibbidi-bobbidi-boo” for Abbi, who remains unemployed and desperately broke. On the other hand, her straits inspire her to tap into her creativity, leading her to cross paths with an ecstatic, pot-smoking version of a woman with whom she seems to have much in common — played by Jane Curtin.

To Jacobson and Glazer, Curtin is one of their biggest gets.  An actual source of magic.

“She is a genius,” Glazer enthusiastically said, pointing out all of the sexism Curtin endured throughout her career, beginning with her behind-the-scene struggles on "Saturday Night Live." “Jane Curtin not only lived it, but spoke up about it, and was above it the whole time. You know from personal to professional, she's a genius.”

She also merely one of many women whose work, effort and presence that “Witches” celebrates, implying that our collective power can still break the malediction hanging over all of us.

Jacobson points out that during the episode we dip into Ilana’s mind twice. The first time is replay all the archival footage featuring the Clementine Cur occupying the White House, and the second instance is an uplifting montage of women famous for working to make the work a better place. A counter-spell, if you will.

“And that's just as important for airtime as the opposite,” Jacobson concluded.