They're running for the same seat from opposing parties. But that's the least eccentric thing about them 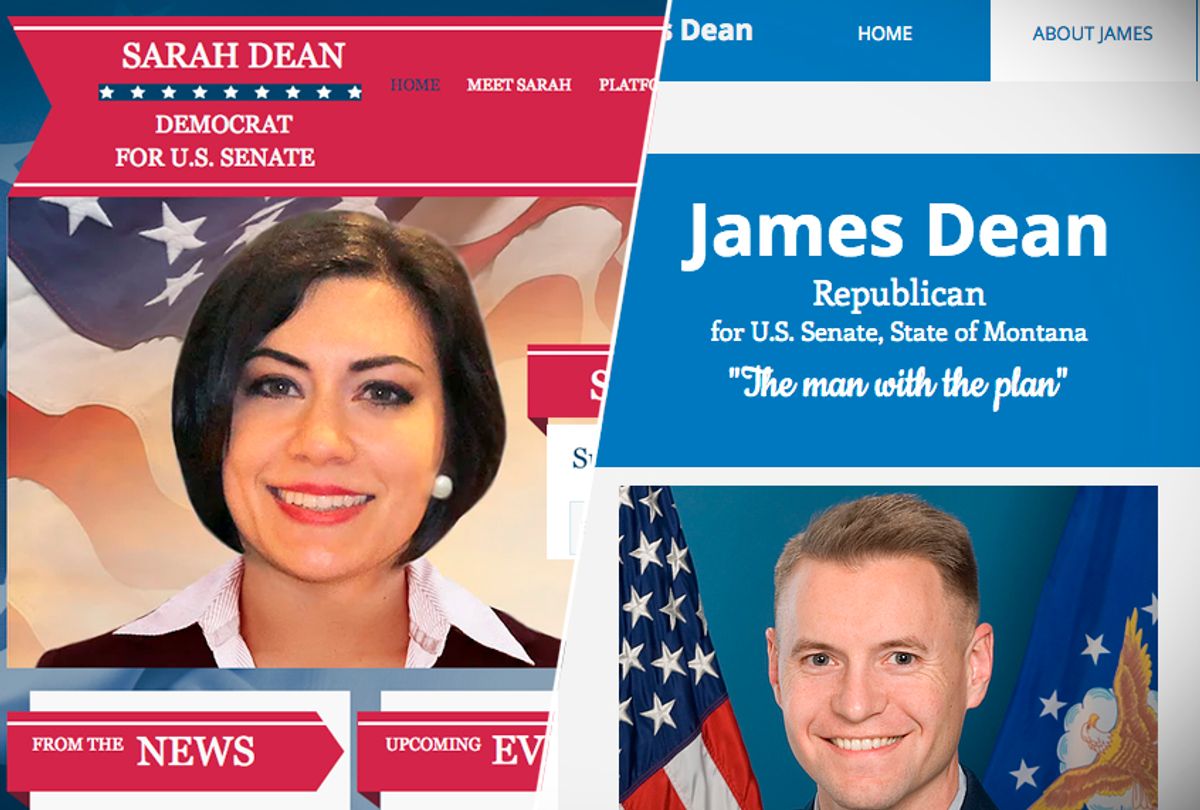 Sure, all couples have their issues. Yet running against each other in a U.S. Senate race seems like a particularly big one.

William James Dean (who goes by James) and Sarah Dean, a couple from Montana, are running for the same U.S. Senate seat. James is running as a Republican. Sarah is running as a Democrat. But that's the least of their problems.

Besides running to unseat second-term Senator Jon Tester, their campaign narrative is full of holes. There are aliases, assorted business ventures, fringe economic theories, and a shared tendency to give indirect responses to basic questions about family or their relationship. Here are some of the most unusual things coming out of their recent interview in a Montana outlet, the Billings Gazette, where they sound like Mr. and Mrs. Smith.

There are aliases involved, because of course there are

Meet Republican Senate candidate William James Dean. Or wait, is that Daniel Lane Dean? Daniel Lane Dean is an Air Force Academy graduate who took the Hawaii state bar exam, and who received divorce papers while while working for the Judge Advocate General Corps at Guantanamo Bay. Oh, and he also tried to run for president in California.

Shortly thereafter, he changed his name for what he said were “religious reasons.”

His wife, Sarah, tells it differently. She takes credit for the change.

“I just didn’t like it, I didn’t like his name because they called him Dan and I just didn’t see him as a Dan," Sarah told the Gazette. "And he thought that it was because I prayed about it and I got an answer, but no, I honestly wanted him to be a William. And I told him, you have to be a William. I didn’t like his name and all these complications that went with me thinking of him being a Dan and I’m just like, ‘I’m over this.’”

Sarah Dean is running as a Democrat against a Democratic senator. Priscilla Dawn is a dressmaker who sells her products online and has “a passion for fashion and tea parties.” Priscilla Dawn Baer is a children’s book author and illustrator. Pastor Victoria Dawn fights to save “widows in India” and makes wedding gowns that you can buy at her website BrideOfChrist.com.  Plot twist: all of the above four people are aliases of Sarah Dean.

They can’t tell you when they were married

With most married couples, forgetting an anniversary can lead to some drama. Not so with the Deans. In fact, no one really knows when these zany kids eloped. The Billings Gazette reported asked when they were married. Their response:

“Let’s hold that one for a bit,” James said.

Sarah: “We were together for a long time before we did but … .”

James: “Um, we had to. It was not with her father’s consent. We had to elope.”

The couple also claims, with Trump-esque bombast, that they are the only people who can save the country if they are elected.

They intend to do this by implementing a new financial system.

“Debt itself creates inflation, and debt itself creates asset bubbles. Any solution to financial crisis has to go directly to the root of the problem,” James Dean told the Gazette. “Which is the debt. And you can’t regulate debt. You have to make it different. So we're not just criticizing bankers, we have an entirely new financial system.”

This economic genius couple that touts a one-time presidential hopeful in their ranks also say they’re political newcomers. The locals in their small college town of 10,000 people seemed not to know who they were.

“When we heard that a husband and wife were challenging Tester on opposing sides, I think everyone was surprised and almost wondered if it was a joke, to be honest,” Jacob Bachmeier, a Democratic state senator from their local Hill County, told the Gazette. “Not a lot of people in Hill County really know them,” he added.

What is the real Sarah Dean backstory?

In her campaign bio, Sarah says she’s a native of Chicago whose family moved to Havre, Montana in 1999 for a “Little House on the Prairie” life. In this narrative she also started a business at 15 (though details are scant on that) and later started making dresses from curtains in her house.

In the in-person interview with the Gazette, Sarah Dean said her father was a famous record producer whom she wouldn’t name, and that he moved the family to Havre to start a child labor camp with his 8 children, which Dean escaped when she was 25.

So what was the business she started at 15 when she was stuck in a "child labor camp?"

Sarah Dean also wanted to “feed the widows” of India

On a GoFundMe page titled “Going to India to Feed the Widows,” San Francisco–based women’s ministry pastor Victoria Dawn (see above re: aliases) raised $155. The campaign is now closed and says it met its goal, although the Billings Gazette says the original goal was $3,500. There isn’t any info on the defunct page explaining the details of the "widows" or the region of India where the money was being directed. However, $135 of that was donated by Priscilla Dawn, presumably the dressmaker, praising Pastor Victoria Dawn for her humanitarian work.

The Church of the Bridge

This one is a bit complicated, so bear with us: On the website of Sarah Dean — a.k.a. Pastor Victoria Dawn — customers can pay $244 for, among other things, prophetic messages and prayer, a jeweled crown, and a presentation of the customer’s business to funders at something called The Bridge Institution.

What's The Bridge Institution, and why would someone want their business presented to its funders? Well, the website for The Bridge Institution says it is a “basic and applied science research institute whose purpose is to design organizations that will in turn implement new social frameworks for humanity.”

It is unclear what "funders" The Bridge Institution has, nor is it clear why one would want their business presented to them. If you peruse their website, you'll find some interesting and seemingly contradictory explanations of what they are — it reads a bit like a blueprint for starting a new civilization, a mix of techno-utopianism and New Age pseudoscience:

The Bridge Institution will intensively study the deep nature of the human subconscious, emotions, moral character, mental health, spiritual essences, motivation, and personality, and determine how they are integrated and relate to other major aspects of the human condition.

Bridge Institution’s agricultural system will enable small plots of land to rival large agribusiness farms in agricultural productivity. Bridge Institution’s agriculture system has three components: a system of data and electronically encoded processes, a financial and contractual system that encourages cooperation, and a portfolio of agriculture-specific innovations. These components enable an agricultural system such that hundreds of people will provide specialized services for each small plot of land. One person may maintain all orange trees on 1000 plots. Another may maintain all micro-irrigation systems. The land owner becomes an integrator who collects data that signals when maintenance, harvesting, weeding, and other tasks are required.

The Bridge Institution website also links to The Church of the Bridge, which in turn lists both William James and Sarah Dean as “coaches in divine destiny and aligning your life, business, or job to God’s plan for your life.”

The contact number for The Bridge Institution also happens to be same number James Dean gives the FEC in his campaign filings.

So who are the Deans? Are they the political power couple that will finally save the United States? Or are they just two hucksters who watched too much “House of Cards”?