Team Trump and the dossier: Do they really want us to focus on this?

Do Trump's boosters imagine that spreading lies about the dossier's origins will make us forget what's in it? 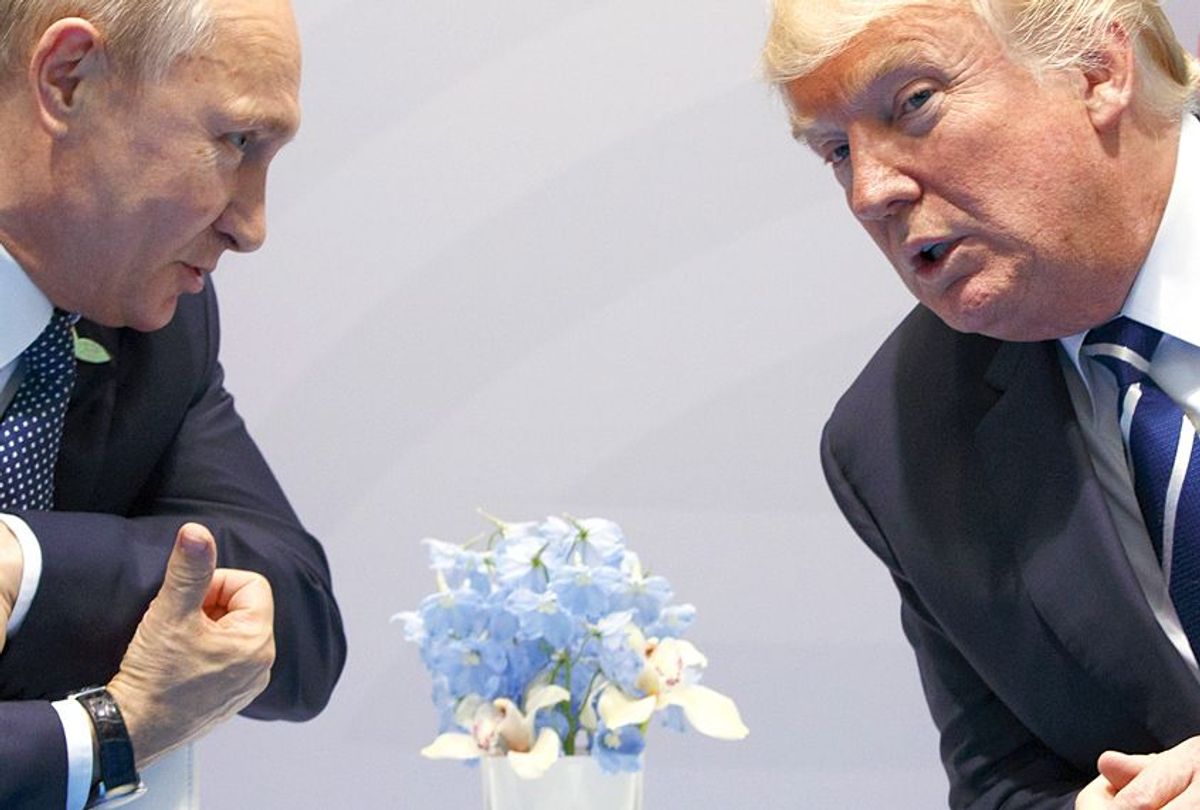 If Donald Trump indeed won the election on his own without the help of Russian intelligence, it was an impressive feat given how terrible he and his surrogates are at politics. I don't mean the twisted realm of political intrigue and three-dimensional chess, just basic entry-level politics. For example, this week, Trump and his people are inexplicably calling attention to the notorious “Steele dossier,” in which former MI6 operative Christopher Steele compiled a variety of links between Trump and the Russian government’s ongoing attack against American democracy. Trump doesn’t seem to realize that if he talks about the dossier, the rest of us will talk about the dossier. Nothing in it is helpful to Trump.

Let’s back up a second. On Tuesday, the Washington Post dropped a story detailing how the Democratic National Committee helped finance the creation of the dossier. Yes, it's the same dossier that includes the infamous if apocryphal "pee tape," but it also goes into significant detail about contacts between Trump inner-circle players like Michael Cohen, Paul Manafort and Mike Flynn with Russian power players such as Vladimir Putin's press secretary, Dmitry Peskov, and a dozen others Russians. Azerbaijani pop star Emin Agalarov makes an appearance, as do Julian Assange and even Green Party presidential candidate Jill Stein. Steele's documents lay it all out: the hacking efforts, the trolls, the disinformation campaigns on social media. All of it.

And yes, we already knew through a CNN report in January and an article by David Corn last October of last year that the DNC and the Clinton campaign picked up the financing of the dossier, after a mysterious Republican donor walked away once Trump had secured the GOP nomination. According to the new Post article, the DNC and the Clinton campaign were represented by the law firm of Perkins Coie and Marc Elias, who hired Fusion GPS and Steele.

That's the extent of it. There's a dossier with dirt about Trump's collusion with the Russian attack on our election. Exactly none of it has been discredited, as some have reported. According to Sen. Richard Burr of North Carolina, the Republican chair of the Senate Intelligence Committee, investigators have been able to "rebuild backwards" the information in the Steele dossier, at least up to a certain point.

It seems clear that initial work on the dossier was paid for by Republicans opposed to Trump during the primaries, and the rest was paid for by the Democrats during the general election campaign. Bipartisanship at its finest. And none of it is beneficial to Trump. So you might think that the White House and the president himself would prefer to keep our eyeballs far, far away from anything resembling the notion of a Trump-Russia dossier.

But no. The White House appears to be using the Post article as a springboard to inexplicably focus attention on the dossier. That isn't just stupid politics, it's a dumb idea in any endeavor. If you want to steer people away from damaging information, don't call attention to the damaging information. Now, for reasons known only to themselves, President Trump, Donald Trump Jr. and their fanboys at Fox News and elsewhere can't stop talking about it.

Not only are the usual suspects reinjecting the dossier into the national conversation, they're also suffering from an obvious reading comprehension problem. Because despite what they're saying, there's absolutely nothing in the Post article that links Hillary Clinton with Russia, or the DNC with Russia either. They seem to be implying -- or simply stating -- that the dossier was compiled in association with Russian intelligence. There has been no reporting or even rumors along those lines. Indeed, the Steele dossier exposes the Russian plot to attack the United States, both in terms of its goals and its methods.

The only link to Russia we can find is perhaps through an American law firm known as BakerHostetler. Fusion GPS, the opposition research agency that originally began compiling the dossier, performed some separate contract work for BakerHostetler, which was hired to defend a crooked Russian/Cypriot outfit called Prevezon Holdings, which is allegedly controlled by Kremlin-backed oligarchs, in a case brought against it by the U.S. government. A purported tax fraud scheme by Prevezon was the target of attorney Sergei Magnitsky, who was eventually imprisoned by the Russian government and died under brutal conditions.

Josh Rogin of the Washington Post has confirmed that the two projects were entirely separate: "[Fusion GPS'] work on the Trump dossier was on a different timeline."

Trumpers, of course, are making it appear as if Hillary Clinton herself colluded with Russia to create the dossier, even though there's absolutely no evidence to support that. In other words, they're just making it up. Fusion GPS wasn't hired by Prevezon or the Russian government, and Vladimir Putin despises Hillary Clinton.

The following information about Donald Trump Jr. might be worth knowing, however.

It turns out that a Russian named Natalia Veselnitskaya (remember her from the June 9, 2016, meeting in Trump Tower?) worked with BakerHostetler on both the Prevezon fraud case and the law firm's lobbying against the Magnitsky Act, a menu of sanctions applied against Russia in retaliation for its mistreatment and possible murder of Sergei Magnitsky. If you've followed the whole story, you know that Donald Jr. met with Veselnitskaya and other Russians in June 2016 to discuss the lifting of the Magnitsky sanctions -- and to receive damaging information the Russians had supposedly compiled about Hillary Clinton. That meeting represents the very definition of collusion or conspiracy, and Donald Jr., Jared Kushner and Paul Manafort were all present.

Frankly, given these links, I'd much rather be in the Republican Party/Hillary/DNC group than the Don Jr./Kushner/Manafort group right now, wouldn't you? Oh, and one last thing. BakerHostetler was also retained by the congressional Republicans in their 2014 lawsuit against the Affordable Care Act. The firm later backed out.

So yes, by all means: Let's talk about Veselnitskaya, the dossier, BakerHostetler, Prevezon, sanctions and the Magnitsky Act. The more eyeballs the better. Denizens of Trumpland, camped out in front of their Fox News Skinner Box, should learn more about the dossier anyway. Maybe some of them will read it.

Even if Robert Mueller decides to take a look at any DNC links to Russia (perhaps he already has), it won't matter. The links to Democrats have nothing to do with the Prevezon case or campaign collusion. Hell, if it turns out there's some sort of connection between Hillary and the Kremlin, let's hear it. If such a link exists and there's enough legitimate reporting about it, as there has been about Trump and Russia, I'll join the chorus shouting about a conspiracy involving Hillary, too. But for now, it's all about the guy who's currently in the White House and people around him. If he continues to bungle and botch the politics on the Steele matter, it might propel us rapidly closer to indictments.