The Curious Case of "The David S. Pumpkins Halloween Special"

What is it about that weird "Saturday Night Live" sketch that ignited the fervor of millions? 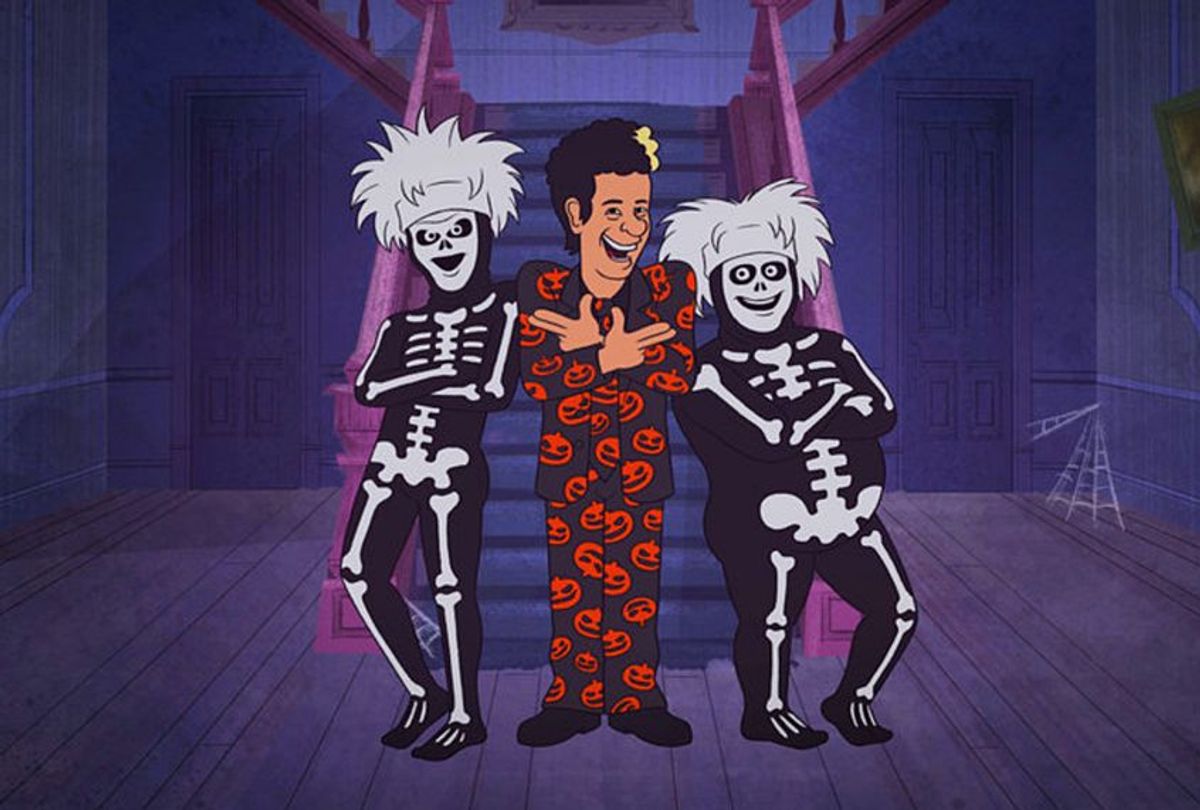 The scariest thing to the mind is the unknown. There are exceptions to this statement, mind you. One of them is David S. Pumpkins.

Rather, he was. These days the Magical Halloween Man is famous enough to merit his own holiday cartoon, “The David S. Pumpkins Animated Halloween Special,” debuting at 11:30 p.m. Saturday on NBC. That’s right: One of the weirdest and possibly least explicable characters in “Saturday Night Live” history, played by Tom Hanks, demonstrated enough of a draw to partially preempt the legendary sketch series in the midst of a new season. The special is followed by the hour-long "SNL Presents: Halloween," which starts at midnight.

A bit of background for those unfamiliar with the guy: David S. Pumpkins (the S is for Simon, by the way — no relation to the creator of "The Wire" and "The Deuce") was introduced to the world on Oct. 22, 2016, as the main character in the four-minute “Haunted Elevator” sketch created by “SNL” cast members Mikey Day and Bobby Moynihan, and writer Streeter Seidell.

In the sketch, David Pumpkins is the most baffling creature in a fright night ride that features ghouls, a chainsaw-wielding psycho and a wraith. He’s just a grinning man wearing a suit festooned with pumpkins who waves his fingers around while flanked by a pair of dancing skeletons who he occasionally spanks. His catchphrase: “Any questions?”

Here’s one: Who would have predicted that the world would go all in on David Pumpkins? Not Day and Seidell.

Conjuring four minutes of fun out of a thin premise is an accomplishment by itself. Extending it over a half-hour special presents an altogether tougher challenge. Day and Seidell knew they couldn’t make the “Haunted Elevator” conceit work for 30 minutes. Instead, the special places the character (voiced by Hanks) and his skeleton b-boy crew in a small suburban town, to take a brother and sister on an adventure to discover the true meaning of Halloween.

“Game of Thrones” star Peter Dinklage guest-stars in the special, which also promises that none of the children’s questions will be answered. “[David Pumpkins] has kind of a ‘Cat in the Hat’ quality,” Day explained to Salon in a recent interview, “where he just sort of shows up and creates chaos.”

What we can explain is some of the character’s bizarre history. David S. Pumpkins was born out of a gag that has no discernible purpose beyond utter goofiness, partly inspired by the truly terrifying retro-ditty known as “Holiday Rap.” “There's a fun little breakdown in it, this breakdance-y, synth-pop beat,” Day said,  “and we were working on a few different sketch ideas on how to incorporate that into a scene.”

Then, the hour grew late and their minds began to wander. “We were thinking about that Tower of Terror ride at Disneyland and how that would be a great construct for a sketch, with the doors opening. It was basically, ‘What's something really dumb, that those doors could open on during a fright ride?’”

This is how the Academy Award-winning Hanks ended up stiffly popping and locking in a cheap suit covered in tiny jack o’ lanterns.

Hanks, who hit his ninth time as an “SNL” host with that 2016 broadcast,  has played his share of legendarily silly characters over the years — Mr. Short-Term Memory, the Girl Watcher and the world’s worst Olympic figure skater among them.

But David Pumpkins is the first to go viral overnight. As of this writing the sketch has racked up nearly 10 million views on YouTube, and will likely surpass that number by the time “The David S. Pumpkins Animated Halloween Special” airs. A year ago, Day and Seidell recall, David S. Pumpkins became a popular Halloween costume, likely owing to its simplicity.

And that may explain some of the affection viewers have for what is basically an incredibly strange and pointless four minutes of late-night television. David S. Pumpkins is the mascot for all of those people wearing costumes nobody gets. We’ve all been there. Some of you are reading this and know you’re going to be answering the question of "So, what are you?" a lot this weekend. And the confidence Hanks exudes in committing to this visual non-sequitur is utterly endearing. David S. Pumpkins, he tells a flummoxed couple played by Kate McKinnon and Beck Bennett, is his own thing. And the skeletons are . . . part of it!

With a bit of distance, however, Seidell has formed a different theory.

“When the sketch came out, the election was right around the corner. The rhetoric was heated on both sides, everyone was arguing, no one could agree with anyone on the other side,” he recalled. “And then this silly, stupid thing plops into their laps. There's no political overtones. It means nothing, and I felt like people were just relieved to have something fun that they could talk about without it leading to like an argument or a serious discussion. It was like a pressure valve.”

Mr. Pumpkins has also proven popular among a demographic that isn’t old enough to vote, and these are the viewers for whom the Halloween special was made. “A lot of it came from seeing how kids responded to the character,” Day said. “They would dress up and some would reenact the sketch in its entirety and it got us thinking about those Halloween specials we'd see on TV as a kid, and we just thought David Pumpkins would work perfect for sort of a throwback nostalgic Halloween special.”

“There really hasn't been a new one, or at least a new one that's resonated, in 50 years,” Seidell pointed out. “And you know, if you watch the sketch there's really nothing adult about it.”

Except, maybe, the skeletons’ pseudo-erotic sighing after their respective dance solos. Reminded of this, the pair paused.

“I guess I forgot about the sex noises,” Seidell admitted. “But I don't know that a kid watching that would understand what that is.”

In case parents have concerns about the special, Day and Seidell enlisted their young children as a test audience. Seidell said his son enjoyed it but “at the end his only question was, ‘Are the skeletons David Pumpkins’ only friends?’"

Seidell said told his son, "’I don't know. That's a really good question.’ It got me really thinking about the essence of this man's life.”