This cop killed an unarmed black man, so they assigned her to community relations

Just over a year ago, Betty Shelby killed Terence Crutcher. Today, she's back on the force with a new goal in mind 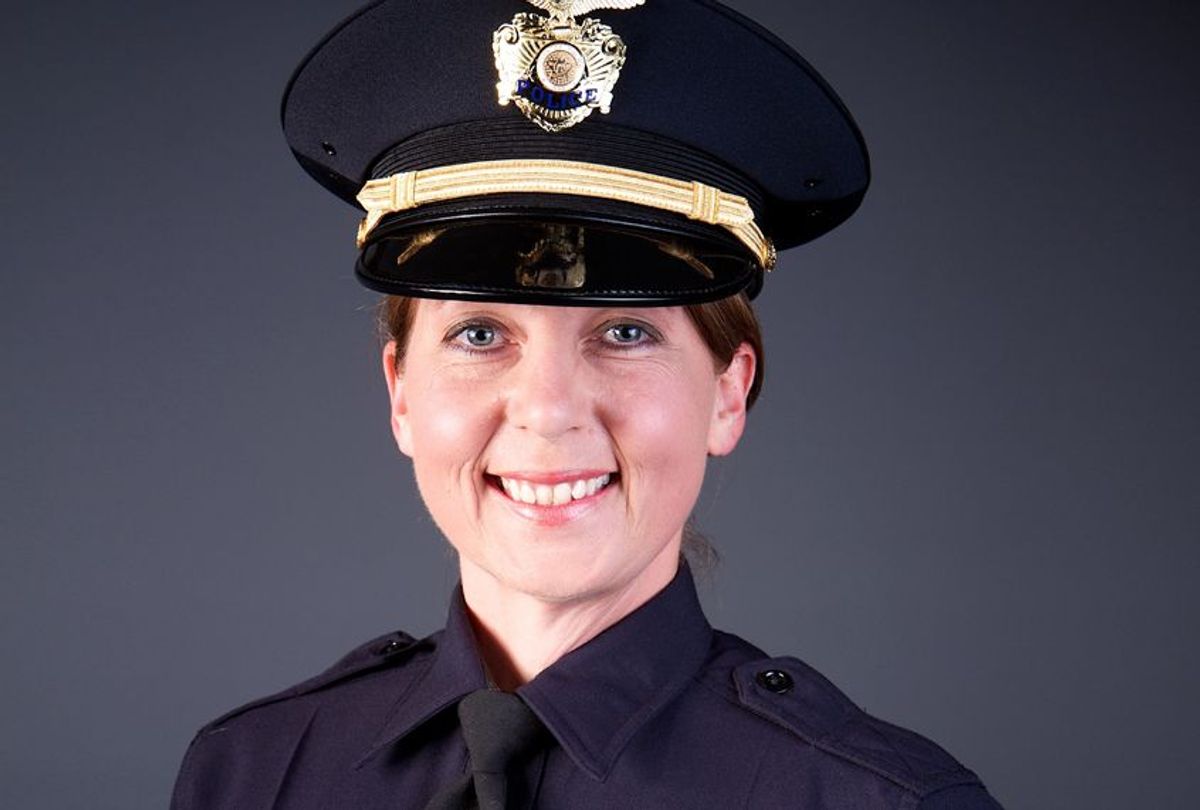 Dusk was taking over Tulsa, Oklahoma on September 16, 2016 and Officer Betty Shelby was responding to a report of a stalled car and a man running from it shouting something about a bomb.

She was driving down a small, two-lane road when she came on the scene, an abandoned vehicle parked dead center on the asphalt. Its driver, Terrence Crutcher, 40, was standing to the side. The 911 call implied Crutcher was on drugs. Shelby was on high alert.

There isn’t much agreement on what happened next.

We know, thanks to a coroner's report, that Crutcher was on PCP. Shelby claims he was ignoring her commands and was, she felt, sizing her up in preparation to shoot. She says Crutcher put his hands in the air, only to drop his arms and reach inside his car. Overhead, Shelby’s husband, who was flying in a police helicopter that day, radioed in that Shelby looked like “bad dude."

By 7:43 Shelby was yelling into her radio that shots had been fired and Crutcher was on the ground, surrounded by a swarm of police. There was no weapon in sight. He was dead moments after.

Almost immediately, all officers involved, Shelby included, were placed on administrative leave. Tulsa Police Chief Chuck Jordan went so far as to say he found footage of the incident "very disturbing and difficult to watch." Within the coming days, Shelby would be charged with manslaughter in the first degree and, a week later on the dot, turn herself in (only to be released on a $50,000 bond).

But in the months that followed, a jury found Shelby not guilty on all charges. During the trial, she noted that Crutcher wouldn't follow her commands and attempted to put his hands in his car. She claimed under testimony that her training had taught her that "if a suspect reaches their hands inside of a car, don't let them pull them out." Within days, she was rehired by the Tulsa Police Department.

Naturally, there was a strong public response following Shelby's acquittal, but she reportedly did her best to keep a low profile. Yet, wherever she went, she had eyes on her. Bombarded by disdain from the community, it was becoming clear she was no longer welcome in Tulsa.

"Shelby's kind of undercover right now, but everyone's watching her" said Marq Lewis, founder of We the People Oklahoma, an advocacy organization focused on police brutality, “government accountability and transparency with local communities." "She really could not do anything publicly without being met with protestors."

Lewis continued, "You could not imagine how disliked she is in her state. Even people in high positions do not want to have anything to do with her, at all. People do not like Betty Shelby." More than that, she had been relegated to office work and taken off patrol.

As well, she and the Tulsa PD still face significant civil battles. Crutcher's family has filed a lawsuit, initially against only the City of Tulsa and Shelby and now expanded to include Officers Tyler Turnbough and Jason Roy and Police Chief Chuck Jordan. The Crutcher family claims "Turnbough's statements are inconsistent with Shelby's as to when Crutcher posed a threat," and Roy failed to provide appropriate medical attention. Chief Jordan faces claims for "being the policy maker for the department," which speaks to the officers' training "to shoot and kill," said Crutcher's mother. The family has brought about these charges to combat Tulsa's "culture of excessive and unnecessary use of force."

With all this in front of her, Shelby resigned from the police department of her own accord. "Since being reinstated, I have found that sitting behind a desk, isolated from all my fellow officers and the citizens of Tulsa, is just not for me," she said in a statement released through her police union. "As I have stated before, the incident with Terence Crutcher was a tragedy for everyone involved, and I am sorry he lost his life," she wrote. "I pray for healing for his family, I will continue to pray for the unity of our community, the safety of our citizens and our police officers."

But over in nearby Rogers County, Shelby had a cheerleader, Sheriff Scott Walton.

The sheriff had been on the sidelines in support of Shelby throughout the entirety of her prosecution, often taking to Facebook posts — which are now deleted — to question “the merits of her prosecution,” according to Tulsa World. Soon after Shelby left the force in Tulsa, Walton sent her a warm invitation to join his department. She accepted.

Shelby, who Walton says will “bring a lot to the table,” now serves as a volunteer Reserve Deputy for the Rogers County Sheriff’s Office. According to Walton, she just wants “to do her job.” That job? Community outreach.

"I will continue to serve the great state of Oklahoma and strive to improve the relationships between law enforcement agencies and our community through education and community involvement,” Shelby said in a statement after she was hired in August, less than a year after killing Crutcher.

What makes her qualified to do so? Experiencing first-hand the complicated relationship between police officers and communities of color? Training in public affairs or community organizing? No. Shelby can't boast those. Moreover, wouldn't shooting an unarmed black man from a distance possibly disqualify her? Not necessarily so, according to the Sheriff’s Office spokesman Major Coy Jenkins.

"The situation that [Shelby] was involved in," Major Jenkins told Salon, "it's something that we looked to see what would be determined by the criminal justice system and by the judicial process, and she was acquitted of those charges that were brought against her." He casts her hiring as a no-brainer. "[Her acquittal] is something that we certainly identified," he said, "and that's all we needed to know, that she needed to remain in law enforcement."

But that very same jury that acquitted Shelby of all charges may beg to differ. In a letter co-signed by the jury, the foreman wrote, "the jury could not, beyond a reasonable doubt, conclude that [Shelby] did anything outside of her duties and training as a police officer in that situation." However, it also said that the jury "could never get comfortable" with saying she was blameless either.

As well, an anonymous juror told The Frontier that the jury "penned a letter to Chief Chuck Jordan saying that Shelby should never again be a patrol officer." Though Dylan Goforth, the interviewer, is unsure if the letter actually made it to the hands of Chief Jordan, the sentiment of the letter still stands.

So what exactly suggested to the Sheriff's Office that Shelby "needed to" remain on the job? From a distance, it seems to be nothing more than a belief that Shelby is a damn good police officer.

In fact, the department's faith in Shelby is so absolute that she is already on the road to becoming an Advance Reserve Deputy. Once she completes 200 hours of supervised ride alongs, she will be “able to do anything else that any other full time deputy would be able to complete,” said Jenkins. Shelby's duties would then include going out on armed patrol unsupervised, according to NYPD veteran Peter Moreno.

In the meantime, she's assigned to shore up the divide between the department and the public it serves.

Yet, as Shelby works toward fostering a growing relationship between law enforcement and the community, many in that community remain unconvinced.

"I am fearful, because I don't think she can offer anyone anything at all," said Lewis, who feels it is unlikely that Shelby can follow through with her intentions.

Major Coy Jenkins insists that despite community resentment in Tulsa, Shelby is up for the job in Rogers County. “I don't think it will affect her work at all,” Jenkins said. “Lewis says he represents a group of people, but I'm not so sure that because he makes a statement, it’s exactly the way that they feel.”

Jenkins may be right. In fact, the community Shelby would be working with is 75.3% white and only 1% African American, according to the United States Census Bureau. The population that might have felt targeted by her actions just isn't a big part of Rogers' demographics. It's surely easier to patch relations between a community and law enforcement when there are few gaps in sight.

But again, remember that prior to her confrontation with Crutcher, Shelby was no more a community engagement specialist than any other basic, fellow officer. Again, what then qualified for her the role?

The only difference between Shelby then and Shelby now is what came out of the shooting and its legal aftermath. Are we to take it that all this, killing Crutcher included, was training she needed to become an expert in the field? If not, what else is there? Neither the department nor Shelby have made this clear.

But that is not the most important matter here. Shelby's liaison role, the fact that she may carry a gun again and the sheriff's department unwavering faith in her sends a message to both the black and white communities. It says that using deadly force in a questionable situation and helping to perpetuate a divide between police and communities of color may make her, in Chavis' words, “a model for how officers should act in those situations.”

Indeed, it possible to argue that sending a message may have been part of the reason Rogers County reached out to her in the first place. As Sheriff Walton told CNN in July about why he hired Shelby "I'd hate to think that I was sitting there quietly and letting a movement take over and take our ability to protect and not only protect people, but get officers killed." For him, it's not just about bringing in an officer who deserves to work, but making a stand against those who feel that she, and other officers who kill under questionable circumstances, have no business holding weapon.

Perhaps to underline this, a judge ruled on October 25th that any record of first-degree manslaughter charges would be expunged from Shelby's record. As a result, "this crime does not exist for employment application purposes," said Shelby's defense attorney, Shannon McMurray. The expungement will also seal the case file, keeping it exclusively accessible to the courts. McMurray said that the purpose of the motion was, "to have that smear on her name removed from public view" — that "smear" being the death of an unarmed black man. She is free from her past and may soon be armed again.

Lewis is less sure. “This is not the last we will see of Betty Shelby” he says.