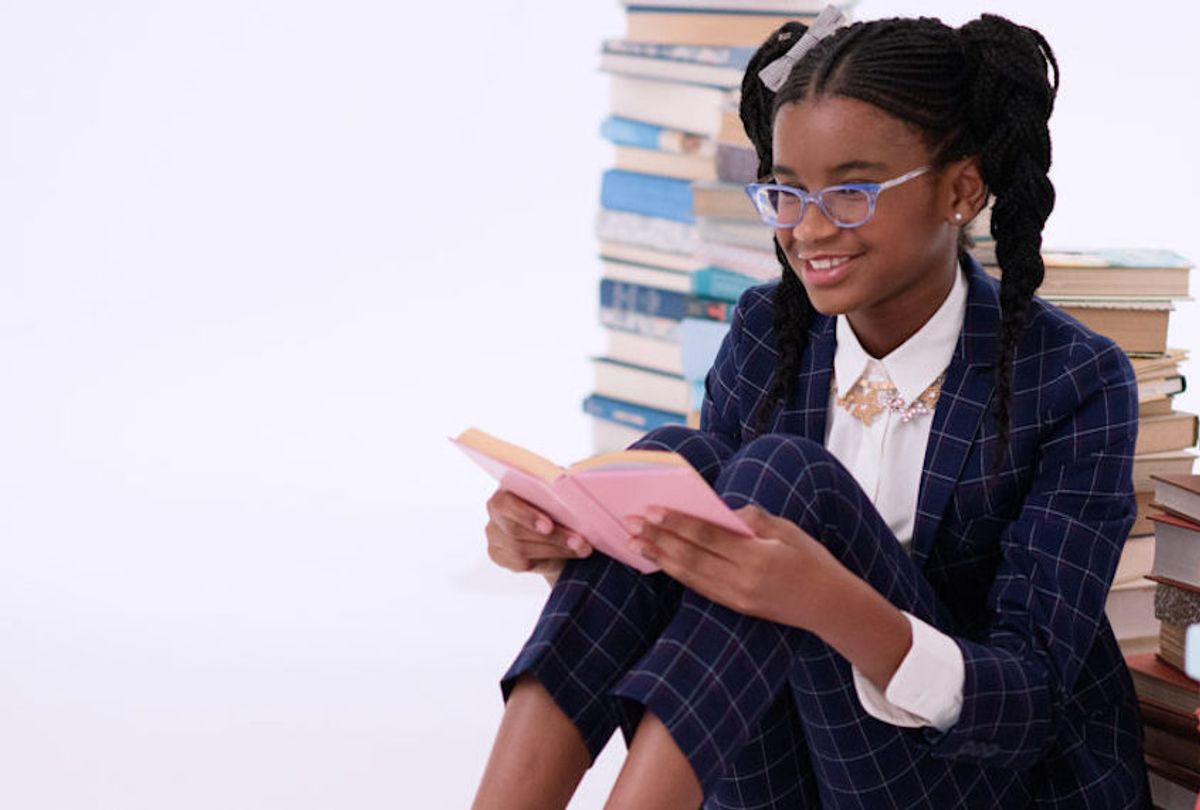 Marley Dias, who is 12, arrives in New York’s Fashion District wheeling a suitcase filled with blazers, sneakers, and ten pairs of eyeglasses. She’s traveled in a town car from her home in New Jersey to be photographed for a publication that is presenting her with an award in November, which will debut this winter. She’s wearing a translucent pink plastic pair of glasses, Converse, a three-quarter-length baseball tee, and cut-off jeans.

Dias’s publicist hugs her and steps back like a mother surveying her daughter who’s just come back from college, commenting on how tall Dias has grown. The publicist introduces Dias around to the camera crew, who has been toying with the placement of stacks of books against a stark white backdrop. There’s a lot of chatter at once as the makeup artist and stylist size up Dias and lead her into the dressing room for privacy. The windowsill is lined with clip-on bows and jeweled hair accessories. Tomboy suits hang off the clothing racks. There’s a suggestion that Dias wrap her hair into pigtails, and then some discussion about whether that will look too childish. Dias sits in the dressing chair. As the makeup artist begins dabbing the brush in the liquid foundation, the publicist interjects to say she doesn’t want Dias to wear too much makeup. She should look her age.

Her mother, Janice Johnson Dias, who is the president of the small non-profit GrassROOTS Community Foundation, asked Dias over breakfast one morning what she had learned over the year. Johnson Dias likes to pose the question, “What happens when you see your own problem? What are you going to do to solve it?” Dias, then only 11, said she wanted to attempt to collect one thousand books that featured black girls as the main character. She had been reading stories in school, like "Where the Red Fern Grows," that featured “boys and their dogs” and couldn’t relate to these protagonists. In November of 2015, Dias, then in sixth grade, launched a campaign called #1000BlackGirlBooks.

“I thought that was a very big problem,” she says of being assigned books that featured mainly white men and boys, “because kids don’t experience the same thing.”

Kathleen Horning, the director of Cooperative Children’s Book Center, which documents the number of books by and about people of color, found in 2013 that of the 650 young adult fiction books it tracked that year about humans, only 36 featured people of color as the main character, about five percent of the total. Two years later in 2015, the organization found eight percent of children’s books featured African Americans as main characters, less than one percent Native American, three percent Asian Pacific, and over 73 percent white characters. Twelve percent featured “animals, trucks, etc.” which shows there were more kids’ books being published about inanimate objects than about people of color.

Read more Narratively: In Most Schools, Gifted Students with Learning Disabilities Are Left Behind. Not Here.

Several organizations are trying to address the disparity, including Writing in the Margins, which mentors emerging writers and We Need Diverse Books, which advocates for change in the publishing industry. Its co-founder Dhonielle Clayton, who was a librarian for six years, said she wouldn’t have been able to fill one shelf of books that featured children of color as the main characters. One student, a girl of color, asked Dhonielle to pick out a book for her about a witch, one who looked like she did, and Clayton couldn’t find one.

“It’s exhausting to talk to people who are ignorant and don’t get it,” Clayton continues, speaking about the lack of diversity within publishing houses, as well as in the books they put out — where a 2015 survey by Lee and Low Books showed that 79 percent of people in the industry were white and only four percent black. “You give up, you hit roadblocks, people think you’re trying to dispossess them. Diversity is not about replacing. It’s about enhancing and adding. The pie is not going to be gobbled up by one group.”

Twelve days from Dias’s scheduled deadline to collect her 1,000 books, which was set for the end of January 2016, she had only received 200 books, which she planned to donate to a school in St. Mary, Jamaica, where her mother is from. But the campaign grabbed the attention of the local FOX news station, "Good Day Philadelphia" — where she was interviewed wearing lime-green sunglasses — and afterward, the media and press requests began pouring in. Shortly after, she appeared on "The Ellen DeGeneres Show" as her parents proudly beamed from the audience.

Read more Narratively: How a Trip to Disneyland Changed My Trans Family Forever

The campaign blew up from there, turning Dias into a sought-after mini celebrity. Later that year, the Poughkeepsie School Districted paid her $6,500 to give an hour-long speech to staff and a workshop to fifty students.

“The first time I saw her on T.V., I cried,” says Sonia Fergus, the mother of Dias’s childhood friend, who accompanied her to the photo shoot. “Most people don’t get to do what they love and she’s getting to do that.”

Almost two years since the campaign began, Dias has now gathered over 10,000 books, and about 2,000 unique titles with donations from places like Barnes & Noble. She sent the donations to schools and social service organizations across the United States and Jamaica. Last summer, she was asked to create a zine for Elle.com, which was a big deal for her because her life goal is to become a magazine editor. She interviewed Hillary Clinton, filmmaker Ava DuVernay, and Misty Copeland, who she’s a “huge fan” of and says she models her life after the ballet dancer’s “grace and elegance.” Her first book will be published by Scholastic early next year, which Dias describes as guide for girls over ten that shows how they can change the world “in their own way that’s not just in a soup kitchen.”

Dias wants to keep working on issues of diversity and literacy, hoping one day to perhaps host or produce a show and empower other kids to speak out.

Johnson Dias says her daughter is not afraid to stand up for others, like helping friends who are challenged by schoolwork. Though much of her job requires being in the spotlight, she doesn’t like to draw attention to herself. When she first noticed the lack of diverse books in her school, she kept mum and didn’t appeal to her teachers. However, Dias’s new role has matured her beyond what many young teenagers experience.

“She has changed. I think she’s more serious with the social responsibility. It’s no longer about her and she’s carrying that weight more than I as her mother would have liked,” she says.

Before the four-hour long photo shoot begins, Dias’s makes sure she eats eats lunch. A caterer has delivered salmon, kale salad, and an assortment of cookies. Dias is still hungry for the fish after it’s gone so the publicist slices off a piece of hers and puts it on Dias’s plate. As she eats, Dias takes out her cellphone and starts scrolling through her Instagram page to show off her school friends, who she says are so diverse, they’re like the United Nations.

“Only ten percent of people are left-handed,” she says, changing the topic with a fact she repeats later for the camera crew.

She sits cross-legged on the floor against the color-coordinated stacks of books, switching between making silly faces and pretending to read. The photographer sits bare-footed a few feet away, directing Dias where to sit, when to stand and how to pose.

As the campaign snowballed, Johnson Dias expected her daughter’s grades to dip, but Dias continued to qualify for honors classes.

Dias echoes that sentiment. She doesn’t always like to dress up and prefers not to stay out late. She gets to travel now and meet influential people, but she can’t see her friends all the time and has missed some school. She acknowledges that being in the public eye means her freedom is limited compared to other kids.

“People like to think of me as an author or a personality,” she says during the shoot. “But childhood is a very special time in your life and you never get that back.”

But she’s forging ahead with the pursuit as a means to pave the way for other kids.

“I want to actually change the system we live in,” she says.