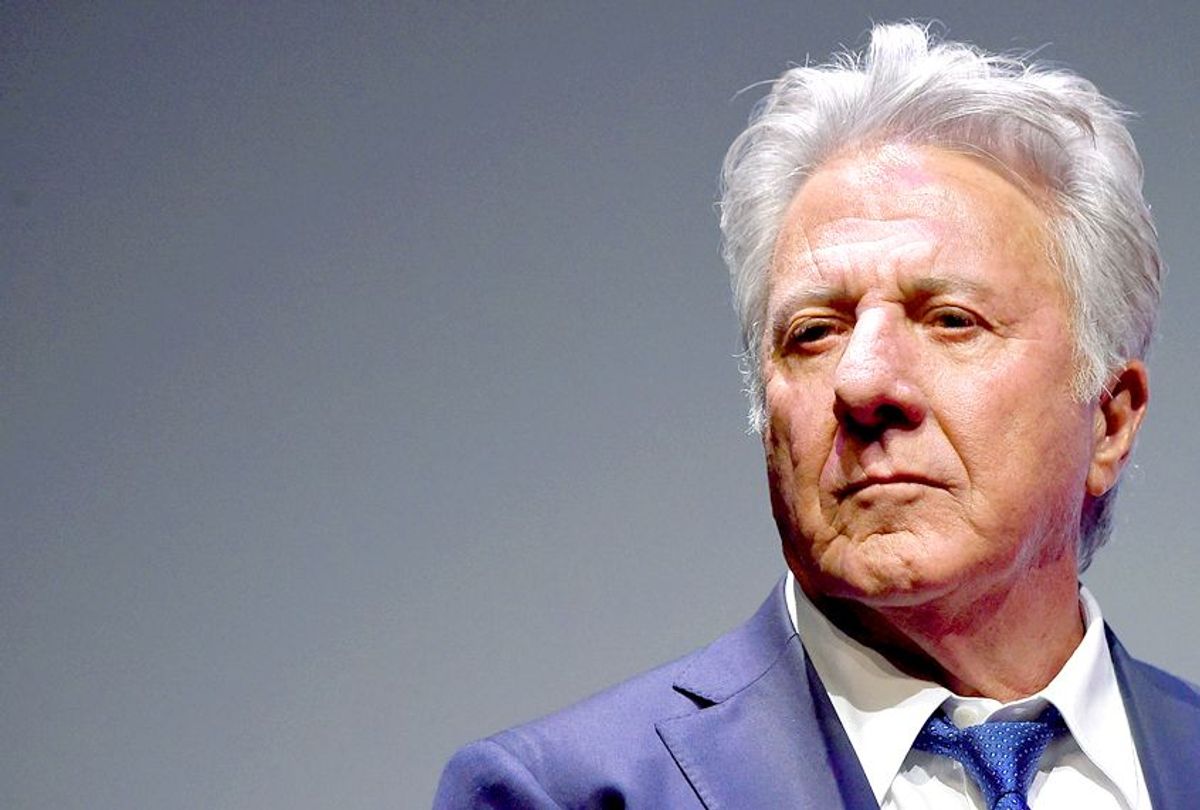 Dustin Hoffman is facing allegations that he sexually harassed a 17-year-old production intern while working with her in the 1980s. Anna Graham Hunter, now a writer, claims that Hoffman made unwanted advances toward her during the filming of the television movie "Death of a Salesman" in 1985.

As Hunter wrote in a guest column at The Hollywood Reporter:

[Hoffman] asked me to give him a foot massage my first day on set; I did. He was openly flirtatious, he grabbed my ass, he talked about sex to me and in front of me. One morning I went to his dressing room to take his breakfast order; he looked at me and grinned, taking his time. Then he said, "I'll have a hard-boiled egg … and a soft-boiled clitoris." His entourage burst out laughing. I left, speechless. Then I went to the bathroom and cried.

From there, Hunter gives a day-by-day accounting of Hoffman's allegedly escalating behavior, preserved through constant dispatches she sent to her sister during production. She claims it began with supposedly friendly, offhand, inappropriate comments. Then, as she says, their interactions moved into actual physical contact.

Detailed and thorough, it is one of the more unsettling accounts of alleged on-set sexual harassment in Hollywood that have come out since the twin exposés revealing Harvey Weinstein's supposed pattern of sexual abuse — not for any violent specifics, but for the way it captures the confusion and helplessness young women feel in such situations.

Hunter, herself, reveals her inner conflicts:

There was so much I loved about being on set — taking John Malkovich's lunch orders and falling more deeply in love every time he spoke to me or said my name; bonding with the crew as we worked 16-hour days; hearing Arthur Miller say my first two names because they sounded like a word game, and that amused him; dancing the polka with Charles Durning, who made every room he entered a happier place. And yes, I loved the attention from Dustin Hoffman. Until I didn't.

After detailing more incidents, Hunter's letters details how, eventually, it all came to a head:

Later, I was delivering lunches when John [Malkovich], Stephen [Lang] and Dustin came down the hall and he shouted, "Anna! So you think I'm a sexist pig, huh? Anna!" The whole f**king studio heard him. So I told him that I didn't appreciate his wandering hands or his comments. He apologized and said he would stop.

After that, she claims that her supervisor, a woman, worked to silence her:

But the bad news is [my supervisor] said it's too bad it became an issue. Hell, I didn't make it an issue. He did. She said that for the sake of the production we have to sacrifice some of our values and just let it roll over our heads. She said we should try to have a sense of humor and just giggle and slap his hands or something. But that's when I feel the cheapest, like, "Oh, she really likes it."

In a contemporary dispatch she wrote, "No one is 100 percent good or bad. Dustin's a pig, but I like him a lot," revealing further the often competing thoughts in the minds of those who suffer through this sort of abuse. To her credit, Hunter doesn't offer easy reading or ready answers, but a full portrait of what she claims went through.

"Whenever I talk about this," she says, "I sense that my listeners want a victim and a villain. And I wish my feelings were as clear as theirs. I would be more comfortable if I felt nothing but revulsion for a man who had power over me and abused it." Many women deal with exactly this issue when confronting their abusers, but few talk about it. It's a situation that makes full disclosure even more difficult for many.

She also alleges that Hoffman offered the same treatment to other unnamed women on set and that other older, powerful men also harassed her, author Frank McCourt included. She questions whether they groomed her, whether her own patterns of interaction contributed to these situations, why she was, in her words "drawn to" such men.

With the remove of decades, however, Hunter has few doubts about what she alleges happened to her. "At 49, I understand what Dustin Hoffman did as it fits into the larger pattern of what women experience in Hollywood and everywhere," she says. "He was a predator, I was a child, and this was sexual harassment."

For his part, Hoffman told the Reporter "I have the utmost respect for women and feel terrible that anything I might have done could have put her in an uncomfortable situation. I am sorry. It is not reflective of who I am."