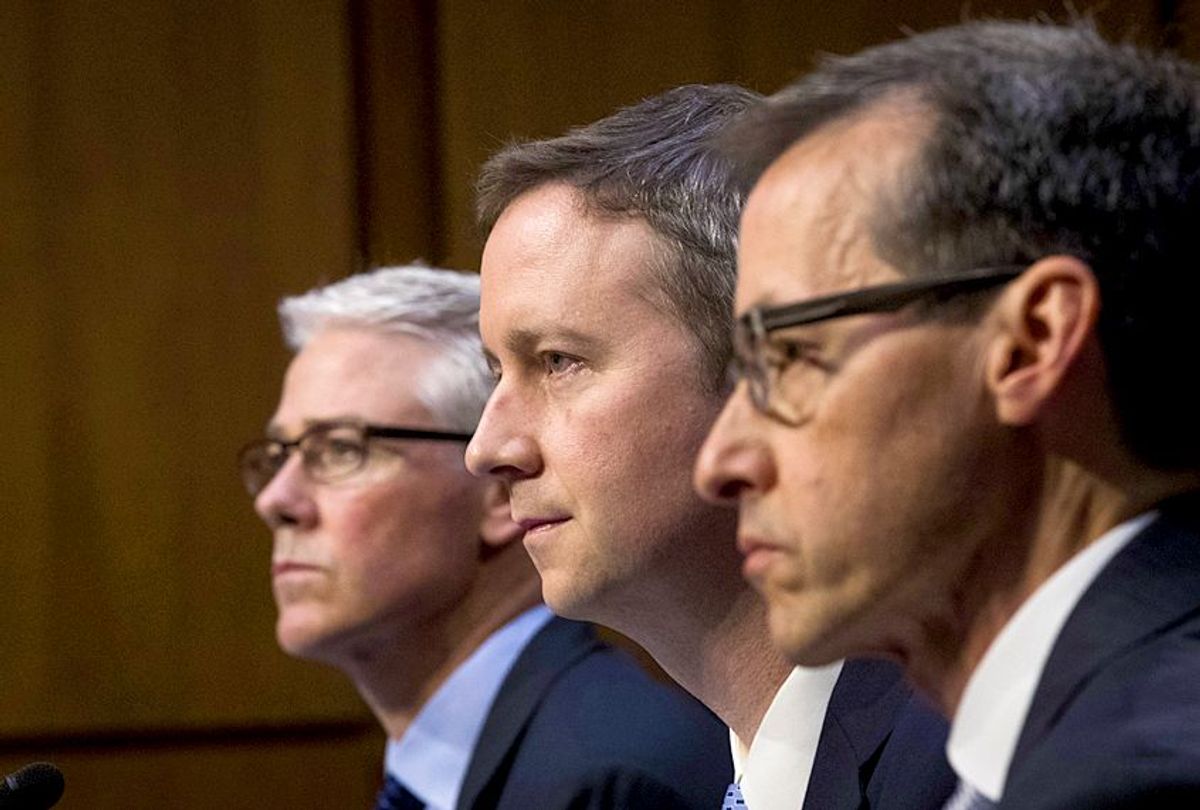 In hearings on Capitol Hill on Tuesday and Wednesday, senators of both parties repeatedly rebuked attorneys for Google, Facebook and Twitter for doing virtually nothing to detect Russian attempts to manipulate American politics in the 2016 election, and for underestimating the size and scope of that interference in their initial reports to the federal government.

“I don’t think you get it. I think the fact that you're general counsels, you defend your company," Sen. Dianne Feinstein, D-Calif., told the top attorneys for the three social media giants. “What we’re talking about is the beginning of cyber-warfare.”

The fact that none of the three social media giants decided to send their chief executives to testify before the Senate Intelligence Committee was also a subject of concern for Sen. Angus King, an independent from Maine:

"It’s fine to send general counsel, but I think if you could take a message back from this committee, if we go through this exercise again, we would appreciate seeing the top people who are actually making the decisions," he said.

Sen. Mark Warner of Virginia, the panel's ranking Democrat, chastised the tech companies for not being responsive to governmental requests for information, even as the attorneys tried to put a contrite spin on their testimonies.

“I hear all your words," Warner said, "but I have more than a little bit of frustration that many of us on this committee have been raising this issue since the beginning of this year, and our claims were frankly blown off by the leaderships of your companies."

In a filing submitted this week to Congress, Facebook admitted that it had drastically underreported the influence that Russian internet trolls had wielded within its platform. In October, the company had claimed that 10 million Americans had seen advertisements purchased by people affiliated with various trolling operations run out of Russia. Facebook now says it believes that 126 million Americans had seen Russian-generated political content, which is almost equivalent to the number of voters who cast ballots in last year's election.

The extent of the Russian meddling is likely to be even greater than that, however. Both Google and Twitter appear to be relying on data shared by Facebook rather than doing their own research, meaning that their conclusions are "derivative," as Warner noted during the hearing.

Members of both the House and Senate Intelligence committees have not yet agreed to release all the advertisements purchased by social media accounts believed to be operated by people working for the Internet Research Agency, a large-scale trolling operation funded by the Russian government. Several of the ads were released in the Wednesday hearing, however, and they reveal that the propagandists targeted a wide range of political issues and partisan viewpoints with their messages. Under U.S. law, it is illegal for foreign nationals to purchase political advertising.

Oftentimes, the ads in question were actually paid for in rubles, the Russian currency. Sen. Al Franken, D-Minn., focused on this in tough questioning to Facebook General Counsel Colin Stretch.

"People are buying ads on your platform with rubles," Franken said. "They’re political ads. You put billions of data points together all the time — that’s what I hear that these platforms do."

In his response, Stretch said that the currency transactions were "a signal we should have been alert to," but would not commit Facebook to prohibiting the purchase of political advertising in foreign currencies.

“I can tell you that we’re not going to permit political advertising by foreign actors," Stretch said. "The reason I’m hesitating on foreign currency is that it’s relatively easy for bad actors to switch currency. It’s a signal, but it’s not enough — we have to sweep more broadly."

Sen. Richard Burr, R-N.C., the chairman of the Senate committee, noted one particularly striking contrast where Russian-linked Facebook accounts sought to organize dueling rallies in Texas. One of the pages, called Heart of Texas, purchased an ad to protest "the Islamization of Texas" by directing people to assemble outside the Islamic Center of Houston. Another Russian-controlled page, called United Muslims of America, put together another event in the same location.

In his questioning of the witnesses, Sen. Marco Rubio, R-Fla., noted that the three companies only seemed to be banning accounts that misrepresented their owners' identities, meaning that open attempts on the part of Russia or any other country to spread propaganda to Americans would likely be permissible on most social media services.

"We don't have state-sponsored manipulation of elections as one of our rules," Twitter's Chief Attorney Sean Edgett, said. "The other rules, like [a ban on] inflammatory ad content, would take down most of these posts, but we don't outright ban it."

Twitter has been more aggressive than Facebook and Google in that it has now banned Sputnik News and RT, websites that are openly owned by the Russian government, from purchasing advertising on its platform. Twitter's reaction may have been an attempt to get ahead of disclosures that it offered RT the chance to purchase 15 percent of the advertisements the microblogging service was planning to sell in the general election.

All three corporate attorneys said their employers were trying to figure out how to stop foreign interference in the election, but it became clear from their testimony that none of the tech giants is aware of the extent to which their platforms are used for such purposes. Under questioning from Rubio, none of the three could say whether countries beyond Russia had attempted to infiltrate American politics.

None of the senators of either party seemed satisfied with what they were hearing. Feinstein likely spoke for the room when she cautioned the tech companies: "You’ve created these platforms and now they’re being misused, and you have to be the ones to do something about it. Or we will."