Democratic Party elites are peddling the same losing agenda on economics and education. 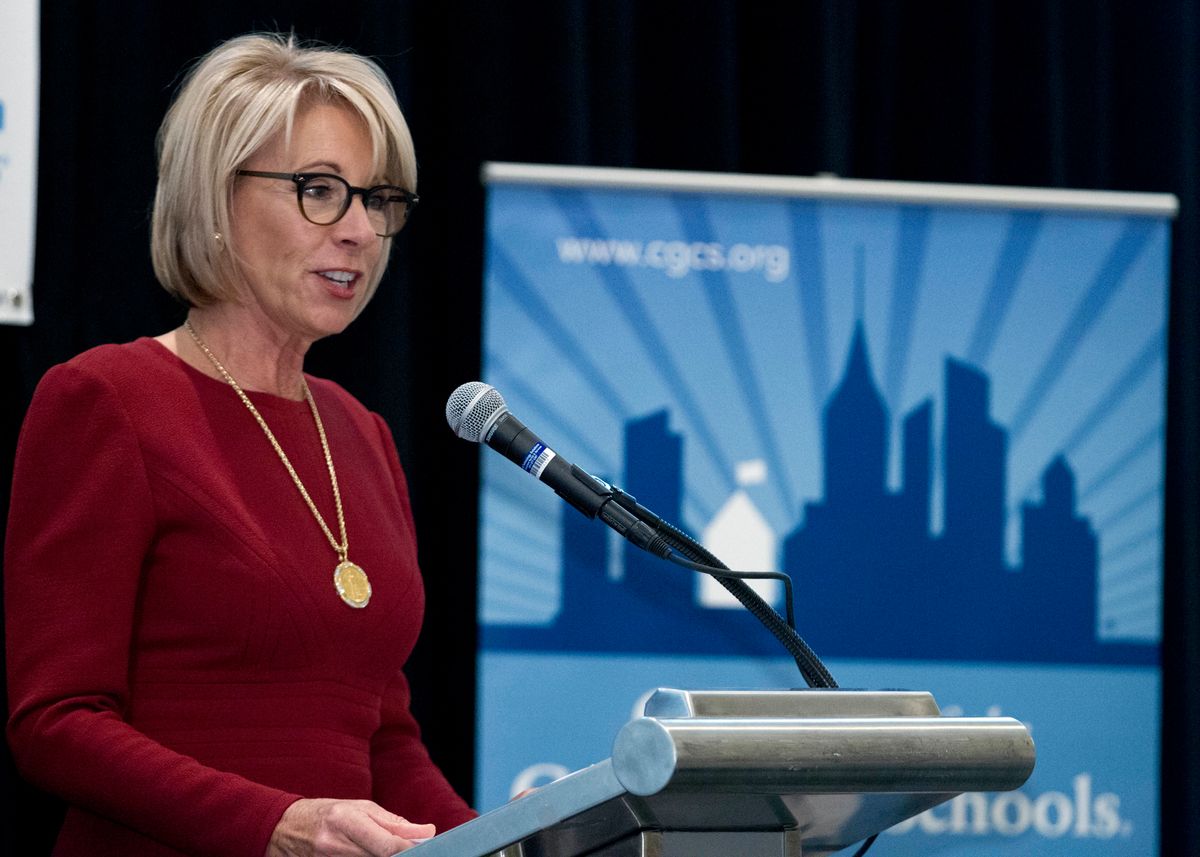 "Here we go again," was what many left-leaning folks likely felt after seeing a recent announcement about a new effort by wealthy donors to rescue the Democratic Party from its electoral doldrums. Backed by $20 million, the "New Blue" campaign, coming from politically centrist think tank Third Way, promises to lead the  party out of the "wilderness" of its minority status to a pathway to "achieving progressive majorities up and down the ballot."

But Third Way's offer sounds more like a continuation of the old losing ways. This is especially true on the issue of education where Third Way continues to bang the drum for a failed agenda that voters mostly reject.

Third Way was founded in 2005, mostly with the support of the financial industry and business executives, to cement the “New Democrat” centrism of the 1990s and make Bill Clinton's presidential administration the permanent leadership of the party. The organization "championed disastrous trade accords, balanced budgets, and cutting the safety net," writes Robert Borosage, but now swears to mend its elitist ways and "discover how to talk to working people without alienating Wall Street."

Any lesson Third Way is trying to learn from its outreach to the working class is likely being lost in translation according to Molly Ball of The Atlantic. Ball accompanied Third Way researchers on a foray into middle America to find out why communities in Wisconsin, Indiana, and other parts of the Midwest flipped from voting Democratic to Republican in 2016.

"It was Third Way’s vision that had been on the ballot in 2016 — and lost," Ball explains, and now the organization wants to know why working-class voters switched, and it pledges to approach that subject with "open mindedness. . . humility and respect."

Ball notes that while Third Way professes to advocate for "what the plurality of Americans are thinking," it tends to favor an agenda that doesn't align particularly well with what the majority of Americans, or even most Democrats, seem to want.

Throughout Third Way's history, its calls for cutting Social Security and Medicare and its reluctance to increase the tax burdens on Wall Street and the rich have not aligned with the views of most voters. While Third Way has long urged Democrats to meet conservatives "in the middle" on issues like health care, trade, a $15 minimum wage, and tuition-free college, most Democrats today want their party to move further to the left and embrace populist grassroots causes.

According to Ball, during its outreach to the Rust Belt, Third Way heard a lot about the issues dividing Americans and making compromises between Republicans and Democrats difficult, but then decided to report instead that working class Middle America "wanted consensus, moderation, and pragmatism—just like Third Way."

While Third Way eagerly reported about "a local employer who sang the praises of automation," Ball notes, it neglected to include the voices of "union members who worried about jobs disappearing." Third Way reported its encounter with a technical-college instructor who called the education crises spawned by conservative governors like Wisconsin's Scott Walker and Michigan's Rick Snyder "opportunities," but chose not to report about "public-school teachers who saw their classrooms gutted by voucher programs."

In its education manifesto "The New Normal in K-12 Education," Third Way declares that the contentious arguments over important education matters — such as charter schools, standardized testing, and how to recruit and retain teachers – are essentially over and that those who are  "fighting in the trenches" just need to get with the program.

The "program," Third Way advances sounds very much like what's been in place for the past 15 years, especially during the Obama administration under the leadership of Secretary of Education Arne Duncan. The title of Third Way's document is borrowed from Duncan's own words to describe the need for schools to go along to get along with the "new normal" of Republican fiscal austerity coupled with ever harsher accountability mandates and more competition from charter schools.

Duncan's calls for higher class sizes and leaner compensation for teachers didn't sit well with parents then, and Third Way's support for charter schools, more standardized testing, and cuts for experienced teachers is not popular now.

Support for charter schools has dropped by double digit percentages among Democrats and Republicans, according to a recent poll. Another recent survey found the public is also generally opposed to using voucher money to send students to private schools, an idea pushed by current Secretary of Education Betsy DeVos that Third Way completely ignores (maybe because it's too divisive). That survey also found most of voters don’t find test scores to be the best indicators of school quality. Lack of funding continues to be the issue most often cited by voters as the biggest problem schools face. But Third Way says nothing about that either.

So if Third Way wants to understand what made Rust Belt Midwestern voters flip to Trump and how it should talk to these voters, it should start with changing the way it talks about education.

If Third Ways' researchers want to understand where the education fight fits in in a new politics for a new era, they should include Erie, Pennsylvania in their forays.

When I covered a story about school closings in Erie earlier this year, I found a community seething with discontent over the "new normal" embraced by Third Way and Democratic Party establishment policy-makers during the Obama years.

Lack of funding, persistent segregation, and the incursion of charter schools were bankrupting the district, while federal mandates on testing and accountability labeled the schools "failures," which further accelerated their slide over the edge. Charter schools competing for education funds received federal dollars to expand, costing Erie schools $23 million annually, according to the most recent count.

Erie's education crisis was inextricably entangled with the economic crisis of the community. Trade and labor policies supported by the federal government for years had helped encourage most large-scale employers to downscale employment or move factories to more profitable labor markets. Most recently, the local GE plant issued another round of layoffs, taking a payroll that once topped 20,000, down to 4,500 workers. After a previous layoff at GE in 2013, one worker hung himself from a factory crane.

"When you think about what happens when industries pull out of towns, the tax base implodes, schools [are] not well funded, and the death spiral continues,” Princeton University’s Anne Case tells a reporter for Vox.

Policies pushed by Third Way and other centrist Democrats not only don't interrupt the death spiral, they hasten it.

If Third Way's New Blue initiative is ever going to amount to any serious recalibration of the Democratic party's message, its researchers should not only talk with white laborers but should also talk with Democrats.

What they would learn is that today's party members are "unimpressed with party leaders whose main claims to leadership are their lengthy résumés as members of the ruling elite," writes Richard Eskow.

In examining the same polling data I cite above, Eskow notes how out-of-step Third Way and the rest of the Wall Street wing of the Democratic party are with the party's grassroots momentum. "The party’s voters are looking to movements to bring them new leaders and a leftward shift," Eskow notes, "something broader and deeper, something that infuses its members’ lives with purpose and meaning."

Those Democrats "in the trenches" fighting to save public schools are part of that movement looking for something more meaningful than the new normal Third Way promotes. They, and not Third Way, represent the only viable future the Democratic party can hope to have.

Jeff Bryant is director of the Education Opportunity Network, a partnership effort of the Institute for America's Future and the Opportunity to Learn Campaign. He has written extensively about public education policy.