Why nobody believed Einstein when he discovered how light worked

Einstein’s suggestion that light was a particle was offensive to scientists of his time. But the evidence was clear 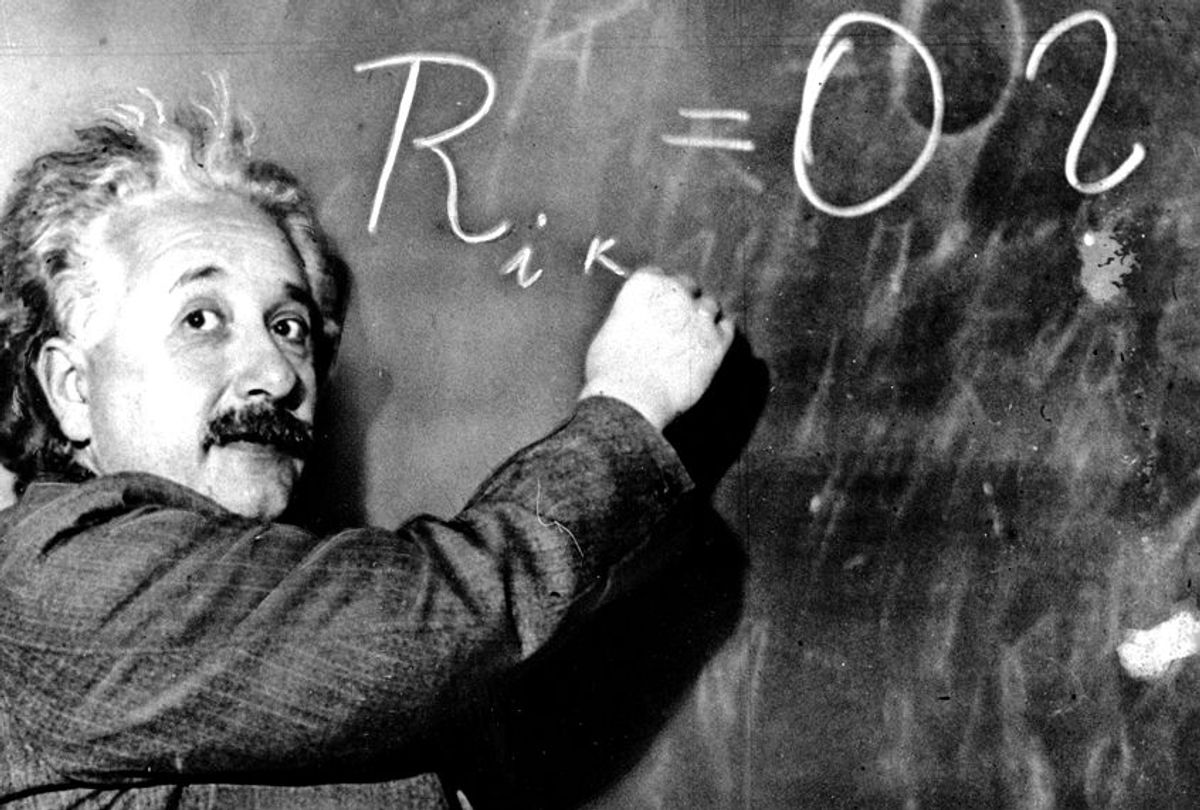 Copyright © 2017 by Scott Bembenek, PhD. This excerpt originally appeared in “The Cosmic Machine: The Science That Runs Our Universe and the Story Behind It,” published by Zoari Press, and reprinted here with permission.

In 1905, at the age of twenty-six, Einstein published four major papers and finished his PhD thesis. Each of these papers was groundbreaking and would change physics forever. However, it was the first of these, On a Heuristic Point of View Concerning the Production and Transformation of Light, which Einstein referred to as “very revolutionary” – the only time he would ever say this about any of his work, in fact – that would, in part, win him the Nobel Prize in 1921.

So, what was that paper all about, and why was it so “revolutionary?” Here is everything you need to know.

The Way It Was: Before Light Particles

Imagine a stone dropped straight down into a still lake. It will cause ripples, or waves, to spread out from the point where it landed (the source). Now imagine doing this with two stones – perhaps one in each hand with your arms stretched out wide – at the same time. Clearly, waves will spread from two sources now. As the waves continue to spread, there will be some regions where the waves from the one source overlap with waves from the other source. Moreover, in these regions of overlap, the height of the wave (which is related to its intensity) may increase, while in other overlapped regions, the height of the wave may decrease. This illustrates constructive and destructive interference, respectively.

The interference nature of light, which was confirmed by experiments and calculations performed by Augustin-Jean Fresnel (1788–1827), dealt quite a blow to particle theory enthusiasts. The final blow to the particle theory of light came with the determination of the speed of light in difference substances. According to the particle theory of light, the speed should be faster when light passes from one substance to another that is denser, as is the case when light moves from air to water. However, the wave theory of light predicted the opposite effect, that light should move slower in a substance of higher density, which was confirmed by 1850 with the work of Jean-Bernard-Léon Foucault (1819–1868) and Armand-Hippolyte-Louis Fizeau (1819–1896). Further developments on the nature of light in the nineteenth century led to the wave theory of light as generally accepted.

This [calculated speed] is so nearly that of light, that it seems we have strong reason to conclude that light itself (including radiant heat, and other radiations if any) is an electromagnetic disturbance in the form of waves …

Although the speed of light had been measured, light as an electromagnetic wave was a totally new concept. Unfortunately, Maxwell would not live long enough (dying in 1879) to see this aspect of his theory validated.

In 1887, Heinrich Hertz (1857–1894) confirmed Maxwell’s theory by actually producing the electromagnetic waves it predicted. Further, Hertz and others showed that these waves displayed the anticipated properties of reflection, refraction, and diffraction. Thereafter, these results firmly established Maxwell’s theory and the wave concept of light in essentially every physicist’s mind. That is, until Einstein decided to shake up its very foundation in 1905.

The Photon and The Photoelectric Effect

For Einstein, the solution was clear. He proposed that light consists of light quanta. In other words, light is made up of particles that have an energy, which today we call photons. Therefore, when light shines on a metal, a photon can collide with an electron in the metal and transfer its energy to it. This transfer of energy is almost instantaneous since the energy of the photon isn’t spread out over a large area, but rather is concentrated, thus allowing the energy to be quickly passed to the electron. Now, when the photon bumps the electron it will send it flying off the metal, only if the energy of the photon is “enough.” What do we mean by enough?

A given electron is held to the metal by the attractive interaction between it and the atom it’s bound to; the positively charged nucleus of the atom holds the negatively charged electron and keeps it from simply flying off by itself. Therefore, the photon needs to have enough energy to free the electron from this attractive pull. This amount of energy is the bare minimum that is needed – anything less won’t be enough to free the electron.

The photon needs to have a certain frequency– or a certain amount of energy – to free the electron from the grip the atom has on it. This minimum amount of energy, inherent to the metal,  explains why the photoelectric effect is seen only above a certain cutoff frequency, rather than at any frequency once the intensity is high enough according to wave theory.

According to the photon concept, a higher intensity would result in more photons of the same energy. Even though we have more photons, if they don’t have the minimum amount of energy required to free the electron from the atom, nothing will happen. What if the energy is greater than the cutoff? What happens to the leftover energy? After all, since energy is conserved, we know that it doesn’t simply disappear.

Einstein’s light quanta and energy conservation equation successfully explained the photoelectric effect and other effects that the wave theory of light and Maxwell’s theory failed to. You might imagine that such a breakthrough would have been welcomed with open arms from the physics community. Not so, unfortunately.

Einstein’s photon concept met with tremendous resistance, and it took almost twenty years after its introduction to be fully accepted. The general sentiment of this resistance can be felt in this excerpt of the letter of recommendation written by Planck, Emil Warburg (1846–1931), Walther Nernst (1864–1941), and Heinrich Rubens (1865–1922) in 1913 for Einstein’s acceptance into the Prussian Academy of Sciences: “That he may sometimes have missed the target in his speculations, as for example, in his hypothesis of light quanta, cannot really be held too much against him ….”

The reason for the opposition was clear: Einstein had dared to call out the wave theory of light, which had seen much success with explaining physical phenomena, especially under the direction of Maxwell’s theory. Therefore, tampering with something that had given so much in the way of explanation offended most physicists.

This attitude would persist until 1923, when new experimental results would convert pretty much everyone to the existence of photons. Until then, Einstein was alone in this pursuit. Unwavering in his commitment, Einstein continued to explore the quantum nature of light, furthering the photon concept along the way, and quantum theory in general.

Dr. Scott Bembenek is a principal scientist in the Computer-Aided Drug Discovery group at Johnson & Johnson Pharmaceutical Research & Development in San Diego. He is also the author of The Cosmic Machine: The Science That Runs Our Universe and the Story Behind It. To learn more about Dr. Bembenek and his work, visit http://scottbembenek.com and connect with him on Twitter.