Another American nightmare — and more cynical lies from gun cultists

The trauma we all feel after Sunday's massacre in Texas is familiar. So are the cynical responses of conservatives 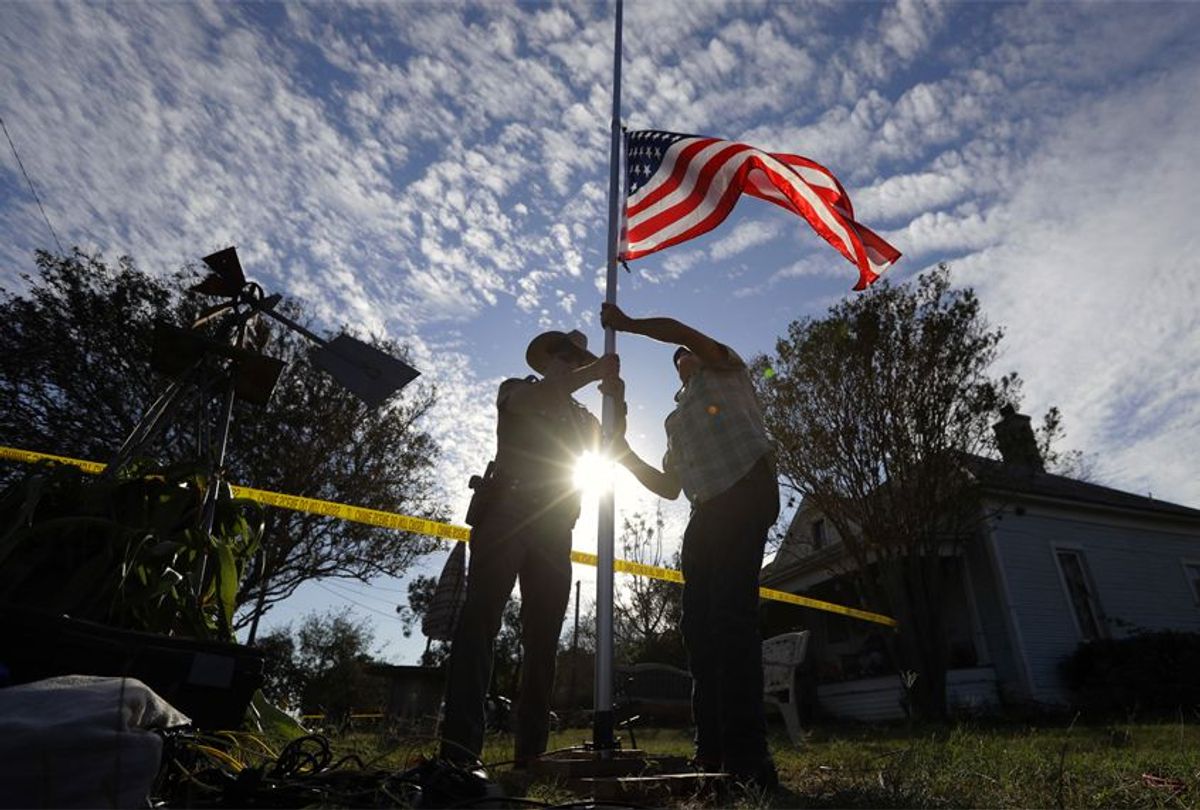 A law enforcement officer helps a man change a flag to half-staff near the scene of the shooting at the First Baptist Church of Sutherland Springs, Nov. 6, 2017. (AP/Eric Gay)
--

On Sunday, Devin Patrick Kelley allegedly killed 26 people during a church service in Sutherland Springs, Texas. He also wounded 20 others. On his personal Facebook profile, he displayed a picture of an AR-15-style assault rifle. This was the weapon of choice he used to kill 7 percent of the population in a town of only 362.

Because of this tragedy, it is now time to once again partake in a unique American ritual.

To participate, you will need a mass shooting bingo card. If you do not yet have one, it is readily available for free from various sites on the internet.

Your mass shooting bingo card lists various options for the narratives that are trotted out when a mass shooting occurs in the United States. For example, you will likely hear phrases such as "guns don't kill people," "don't politicize a tragedy," "it's too soon to talk about gun control" and "pray for the victims."

The mass shooting bingo game is a dreadful form of gallows humor. It is also an accurate representation of how mass murder by gun is all too often discussed in American society.

If a Muslim or someone of Arab or Middle Eastern ancestry had killed 26 white Christians in church, President Donald Trump would demand that the perpetrator be executed, describe him as human garbage and argue that "extreme vetting," along with banning immigration from certain parts of the world, will keep Americans safe.

If a black person or another nonwhite person had killed 26 white Christians in church we would hear loud demands from Donald Trump, the Republican Party and the right-wing media to get tougher on crime, and complaints that somehow America's police are unfairly restrained.

But if a white man such as Devin Kelley kills dozens of people at a church (or 58 at a country music concert), then it is somehow in poor taste to "politicize" such tragedies. That person is a "lone wolf." He is not a terrorist. His actions are "outliers," and perceived as unpreventable. He is described as mentally ill, or affected by other types of emotional or psychological problems.

Some would try to use creative math to deny or deflect from this fact, but white men and boys commit a disproportionate number of the mass shootings in America.

There will be no "extreme vetting" for white men who want to buy guns in America.

There also will be no practical limits on purchasing the military-style rifles that seem to be a favorite weapon for deranged individuals who want to commit mass murders, such as the one Sunday in Sutherland Springs or the one several weeks ago in Las Vegas.

For too many Americans, the gun is God. The ammosexuals worship it.

In this religion, the National Rifle Association is the church hierarchy. The Republican Party is the rank-and-file clergy.

"Gun violence is the price of freedom" is the chorus of the hymn. The ambiguous words of the Second Amendment are holy scripture, to be interpreted only by the church fathers.

In this worldview, mass shootings are viewed as inexorable acts of God or nature. They are inevitable. The blood spilled is a painful gift that sustains the inviolate pact with the American Gun God. America is often described as a "Judeo-Christian" society. I have often wondered if perhaps tens of millions of Americans are really pagans at heart and the fetish object they worship is the gun. It is only through this logic that hundreds of mass shootings a year can result in no federal action that could make such crimes less likely. Only that logic can empower such myths as "gun laws only hurt the good guys" or sustain the illogical belief that the solution to gun violence is more guns.

Faith is a belief in that which cannot be proven by ordinary means. Faith is also the stuff of superstition and magical thinking. As such, the Republican Party's approach to gun control is zealotry and religious mania. Their logic is unknowable to those us who are rational. That does nothing to stop the Gun God's holy warriors from claiming many lives, the faithful and the infidel alike.