"I'm the only one that matters": Trump's chilling imperial power-grab

Trump has never understood, or respected, the limits on presidential power. Now he's trying to make them disappear 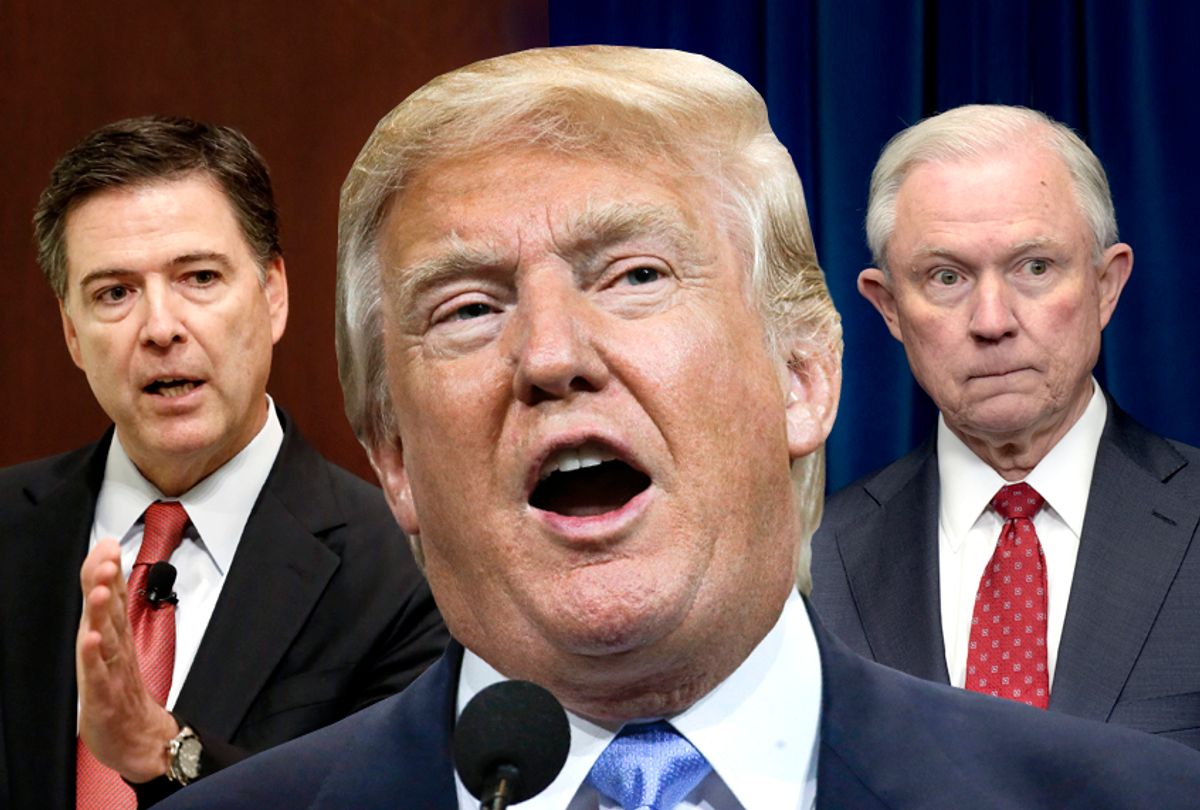 President Donald Trump is overseas right now, doing personal appearances at his properties and making a fool of himself. So far, he's asked Japanese car makers to start making cars in the United States, apparently ignorant of the fact that three out of four Japanese-branded cars and trucks are already manufactured in America. And he hawked U.S. military equipment as if he were selling Trump steaks on YouTube.

That wasn't the worst of it. He also told American and Japanese troops that no nation should "underestimate American resolve." Then he quipped, "Every once in a while, in the past, they underestimated us. It was not pleasant for them, was it?"

Trump's previous foreign trips have also been embarrassing, but he seems more off-kilter than usual this time. That's obviously because of the pressure he's under back home, with the indictments of his former campaign officials by special counsel Robert Mueller. That pressure has once again brought out into the open the authoritarian impulses that are becoming more and more pronounced by the day.

Back when Trump took out full-page ads calling for capital punishment and allowing police to brutalize citizens, he was just another tabloid blowhard. And during the presidential campaign, when he endorsed torture and war crimes and made racist comments about a judge's Mexican heritage, people assumed he was just being hyperbolic. When he repeatedly declared his opponent guilty of crimes, even spitting out the nasty jibe, "If I were president, you'd be in jail," at Hillary Clinton in a presidential debate, nobody thought he actually meant it. But after more than nine months of his presidency, it's become clear that Trump truly has no respect for the rule of law.

He's gotten himself into some trouble because of this. He asked FBI director James Comey to give his friend Michael Flynn a pass and then fired Comey when he refused to play ball, an impulsive act that ended up with the appointment of Mueller. Trump then tried to get the Justice Department to go easy on former Arizona Sheriff Joe Arpaio, and when that didn't happen he just pulled out his pardon pen and set Arpaio free, sending a strong message to all his cronies that he looked out for those who stood by him. But the one thing that both thrills his supporters and gives him sustenance is continually calling for Hillary Clinton to be prosecuted.

Just before the president set out for his Asia trip, he went on a Twitter spree and gave a series of interviews that made it clear he's serious about this. He tweeted frantically about the bogus story being pushed by Fox News about Clinton supposedly "selling out" the country to the Russians in that 2010 uranium deal. Trump made his most revealing comments of all on a radio show last Thursday:

The reason I say it's revealing is that one phrase: "I am not supposed to be doing the kinds of things I would love to be doing." Clearly, what Trump would love to be doing is persecuting his defeated political rival. Whether he would love to do that out of simple sadism or because he thinks it would effectively intimidate those who are investigating him or simply to muddy the waters is unknown. To do it based upon discredited disinformation created by Fox News and various Republican operatives, working together in what has basically become his personal propaganda operation, makes it all the more chilling. This is the work of a dictator in a banana republic, not the elected leader of a major Western democracy.

The fact that all this is being met with a big public shrug is more than a little bit worrisome. The president may not be officially directing the Department of Justice to prosecute Hillary Clinton on spurious grounds, but DOJ officials certainly know he would "love" them to. Republicans in Congress also understand the game that's afoot. They've initiated three different "investigations" into these ridiculous Clinton questions and on Friday took the next step, proposing a resolution that calls for Mueller to "resign from his special counsel position immediately," since he was FBI director when Clinton allegedly committed all her traitorous crimes and therefore showed "willful blindness" to Russians to infiltrate the United States and spread corruption.

Trump's authoritarian tendencies are showing up in other ways as well. Axios reports that when he met with Native American tribal leaders and they complained about land use regulations that prevented them from extracting energy resources, he responded, "But now it's me, the government's different now. Obama's gone; and we're doing things differently here. So what I'm saying is, just do it." Trump may actually believe he has the unilateral power to lift any regulation he wants to, and he unquestionably wishes that were true.

We don't know how much this president really understands about the limits of his authority. And we don't know how far the members of his own party and law enforcement officials who support him are willing to go. But we know what he would "love" to do because he's told us. He would love to use the police power of the federal government for his own purposes. By firing Comey and pardoning Arpaio, he's already pushed the boundaries. This used to be called abuse of power. Under Trump it's business as usual.