As the author of an article labeled "pro-Russia propaganda," I can testify that unorthodox views are under attack 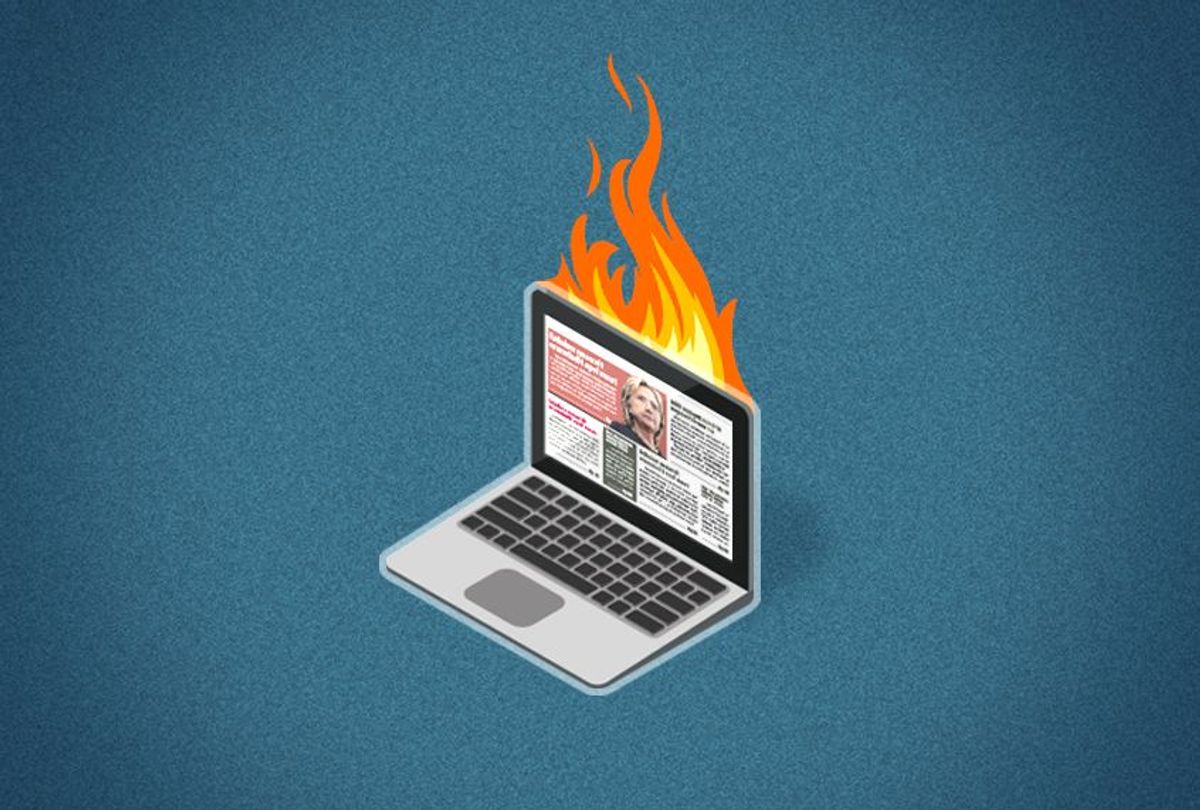 These are tough days to be a serious journalist. Report a story now, with your facts all lined up nicely, and you’re still likely to have it labeled “fake news” by anyone whose ox you’ve gored — and even by friends who don’t share your political perspective. For good measure, they’ll say you’ve based it on “alternative facts.”

Historians say the term “fake news” dates from the late 19th-century era of “yellow journalism,” but the term really took off in 2016, a little over a year ago, during Donald Trump’s run for the presidency. It described several different things, from fact-free, pro-Trump online media to sensationalistic and largely untrue stories whose only goal was eyeballs and dollars. During the primary season, Trump himself began labeling all mainstream media stories about him as “fake news.” The idea that there could be different truths, while dating at least back to the administration of President George W. Bush, when his consigliere Karl Rove claimed that the administration “made its own” reality, gained currency when Trump adviser Kellyanne Conway, caught making stuff up in a TV interview, claimed that she was relying on “alternative facts.”

That dodge would be fine, on its own. Most people are primed to believe that politicians lie — whatever party or persuasion they represent — so their attempts to deny it when called a conjurer of falsehoods posing tend to be recognized as such.

The corporate media — The New York Times, The Washington Post, the network news programs and even National Public Radio — have all responded to being called liars and “fake news” fabricators of by promoting themselves as “the reality-based community” (NPR), or claiming they are fighting the good fight against ignorance, as demonstrated by the Post’s new masthead slogan “Democracy dies in darkness.” The Times has stuck with its hoary “All the news that’s fit to print”slogan, but has added a page-three daily feature listing “noteworthy facts from today’s paper” and has taken to calling out Trump administration whoppers as “lies.”

Last December Congress passed a new law, promptly signed by then-President Barack Obama, that enacted an Orwellian amendment to the Defense Authorization Act of 2017. Called the Countering Disinformation and Propaganda Act, this measure tasks the State Department, in consultation with the Department of Defense, the director of national intelligence and an obscure government propaganda organization called the Broadcasting Board of Governors, to establish a “Center for Information Analysis and Response.” The job of this new center, funded by a $160 million, two-year budget allocation, would be to collect information on “foreign propaganda and disinformation efforts" and "proactively advance fact-based narratives that support United States allies and interests."

What is “fake news”? The target keeps moving

This might all seem laughable, but as a journalist who has worked in this field for 45 years, in both mainstream newspapers and television and in the alternative media, and as a long-time freelancer who has written for publications as widely varied as Business Week, the Nation, the Village Voice and a collectively run news site called ThisCantBeHappening.net, I have watched as this obsession with “fake news” has turned into an attack on alternative news and alternative news organizations.

Last Nov. 24, The Washington Post published a McCarthyite-style front-page article declaring that some 200 news sites on the web were actually witting or unwitting “purveyors of pro-Russian propaganda.” The article, by Post National Security Reporter Craig Timberg, was based on the work of a shady outfit called PropOrNot, whose owner-organizers were kept anonymous by Timberg and whose source of funding was left unexplained. PropOrNot, Timberg wrote, had developed a list of sites which it had determined to be peddling “pro-Russia propaganda.”

For one of the sites on the list, the prominent left-wing journal Counterpunch, founded decades ago by former Village Voice and Nation columnist Alexander Cockburn, PropOrNot offered up two articles as justification for its designation. One of those articles was by me. It was a piece I’d actually written for ThisCantBeHappening, which had been republished with credit by Counterpunch. The reviewer, a retired military intelligence officer named Joel Harding (who I discovered is linked to Fort Belvoir outside Washington, home to the U.S. Army’s Information Operations Command, or INSCOM), labeled my article “absurdly pro-Russian propaganda.”

In fact, the article was a pretty straightforward report on the Sept. 29, 2016 findings by the joint Dutch-Australian investigation into the July 2014 shoot-down of a Malaysian jumbo passenger jet over Ukraine, which concluded that Russia was the culprit. I noted in the article that this investigation was not legitimate, because two nations — Russia and Ukraine — were known to possess the Buk missiles and launchers that had brought down the plane, but only one of them, Ukraine, was permitted to offer evidence. Russian offers of evidence in the case were repeatedly rebuffed. The report also failed to mention that the Ukrainian government had received veto power over any conclusions reached by the investigators.

Was my report “fake news” or propaganda? Not at all.

The fake news in this case has been what has been written and aired by virtually all of the U.S. media, including the Times, the Post and all the major networks, about that horrific tragedy. They all continue to state as fact that a Russian Buk missile downed that plane, though no honest investigation has been conducted. (Technically it is true that the Buk missiles are all "Russian," in that they were all manufactured in Russia. Left unsaid is that Ukraine’s military had Buk launchers since their nation was part of the Soviet Union and continued to purchase them after independence.)

“Labeling news reports that you don’t like as ’fake news’ is the laziest form of media criticism,” says Jim Naureckas, editor of Fairness and Accuracy In Reporting, a New York-based journalism review. “It’s like putting your fingers in your ears and going ‘la la la’ really loudly. Both the government and the corporate media have reasons for not wanting the public to hear points of view that are threats to their power.”

While Kellyanne Conway claimed her right to offer “alternative facts” as a way to justify getting caught in a lie, there are also alternative facts which are real but don’t get reported in the corporate media. A classic example was in the run-up to the U.S. invasion of Iraq, when the entire corporate media reported as fact that Saddam Hussein had weapons of mass destruction and was attempting to develop a nuclear bomb.

There were plenty of alternative news organizations who quoted UN inspectors saying that none of that was true and there were no WMDs or WMD programs in Iraq, but they were simply blacked out by the corporate media like the Times, the Post and the major news networks.

These days another dubious story is that the Russians “hacked” the server of the Democratic National Committee. It may have happened that way, but in fact, the vast intelligence system the U.S. has constructed to monitor all domestic and foreign telecommunications has offered up no hard evidence of such a hack. National Security Agency whistleblower William Binney and retired CIA analyst Ray McGovern have suggested that some evidence indicates a DNC insider must have been involved.

There is certainly fake news all over the internet, and baseless conspiracies run rampant on both the left and the right. But all too often, articles like mine cited by PropOrNot (a genuine purveyor of fake news!) are being labeled as propaganda in what Naureckas says is simply “the use of irony as a defense mechanism” by news organizations that themselves are actually guilty of publishing really fake news, as the Post did with its PropOrNot blacklist “scoop.”

"What the government and the corporate media are trying to do, with the help of the big internet corporations,” argues Mickey Huff, director of the Project Censored organization in California, “is basically to shut down alternative news sites that question the media consensus position on issues.”

A wide threat to online media

That’s a threat to any online news organization, including this one, that depend upon equal access to the internet and to fast download speeds. Already, Huff charges, there are reports that Facebook is slowing down certain sites that have links on its platform, in a misguided response to charges that it sold ad space to Russian government-linked organizations accused of trying to influence last November’s presidential election.

An end to internet neutrality, the equal access to high-speed internet for surfing and downloading that has been guaranteed to all users -- but that is now under attack by the Trump administration, its Federal Communications Commission and a Republican-led Congress -- would make it that much easier for such a shutdown of alternative media to happen.

The real answer, of course, is for readers and viewers of all media, mainstream or alternative, to become critical consumers of news. This means not just looking at articles critically, including this one, but going to multiple sources for information on important issues. Relying on just the Times or the Post, or on Fox News or NPR, will leave you informationally malnourished -- not just uninformed but misinformed. Even if you were to read both those papers and watch both those networks, you'd often be left with an incomplete version of the truth.

To get to the truth, we need to also check out alternative news sources, whether of the left, right or center -- and we need to maintain the critical distinction between unpopular or unorthodox points of view and blatant lies or propaganda. Without such a distinction, and the freedom to make such decisions for ourselves, maintaining democracy will be impossible.