A chameleon-like artist has created the best damn Trump satire

Is anyone — including members of his own administration — not sick of Donald Trump? 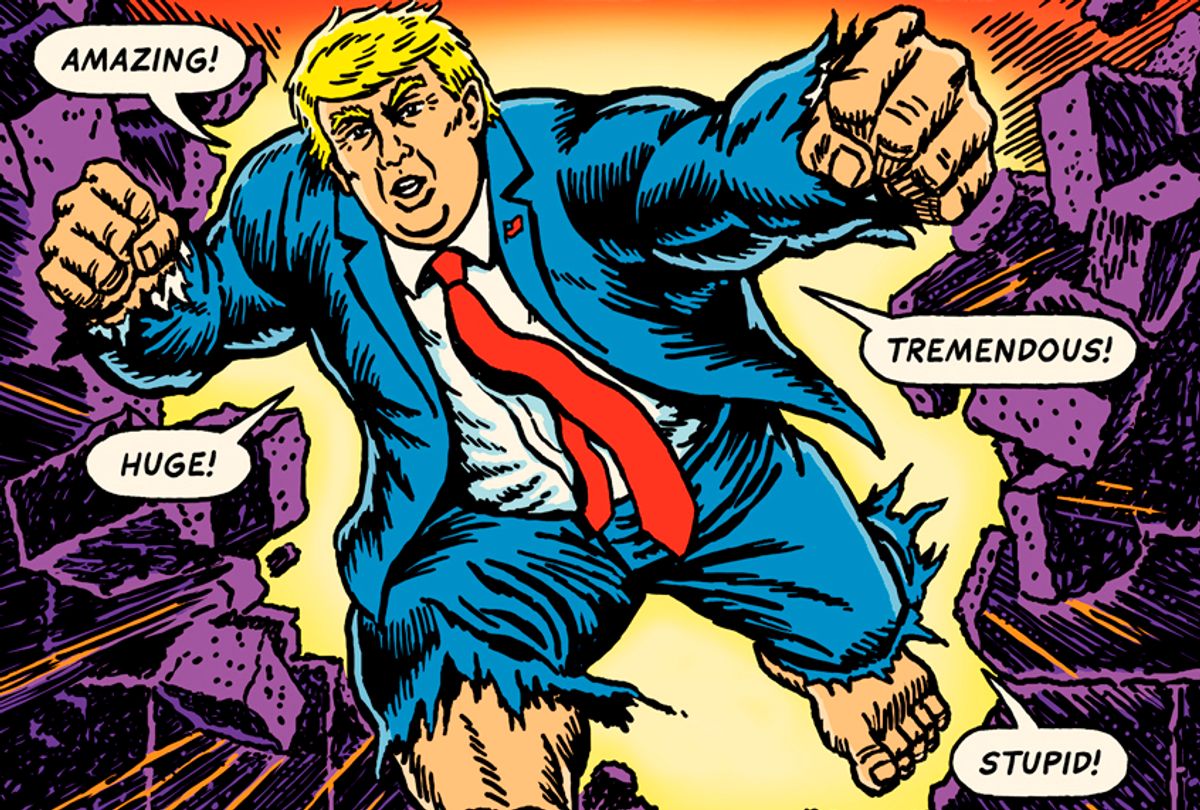 Trump Exhaustion Syndrome is real, and it can extend to anti-Trump articles and comedy. I’m sure Colbert and company are producing fine work in dark times, but I can’t bear to stay up and watch that stuff. It just feels like watching more news. Even Alec Baldwin’s immortal impression is wearing thin.

But however serious your case of Trump overload, there’s a satire worth checking out. Cartoonist Robert Sikoryak — who goes by R. Sikoryak and makes a career of parody — has mashed-up classic comic-book covers with the insane rants of Trump in “The Unquotable Trump” from Drawn & Quarterly. The results are a beautiful celebration of comic-book art and a spectacular satire of President Evil.

Sikoryak began the project last November as a blog and mini-comic, but Drawn and Quarterly’s version is treasury-sized: bigger than magazine size, creating a sumptuous art book. The format is a nod to a 1970s trend at Marvel and DC, when massive editions such as Neal Adams’ “Superman vs. Muhammad Ali” and Jack Kirby’s adaptation of “2001: A Space Odyssey” took up a lot of shelf space. The massive size is likely the only aspect of this book Trump would enjoy.

Sikoryak explained the origin of the project in a phone interview, describing some relatable feelings from last year: “I was getting nauseated and distressed . . . by everything Trump said, basically.” Sikoryak’s previous work gave him the tools to attack Trump with his own words. In “Masterpiece Comics,” Sikoryak retold classic literature in the style of various comic artists, such as “Crime and Punishment” via Dick Sprang’s Batman and Dr. Faustus mashed with Garfield. He was also parodying specific pages of artists alongside existing text in “Terms and Conditions” (more on that book in a few paragraphs). So it seemed natural to mix Trump’s “long, rambling, aggravating words” with classic comic-book covers featuring The Fantastic Four, Richie Rich, The Walking Dead and others.

Sikoryak only uses Trump quotes from speeches and interviews — never the tweets. On each huge page, Sikoryak amplifies and undermines the quote with the perfect cover. Trump’s obsession with his electoral count of 306 is a natural for a parody of Frank Miller’s “300.” In “Trumpsformers” — “Rich Guys in Disguise” — Sikoryak mimics a 1994 Transformers cover by Derek Yaniger, featuring a massive, robotic Trump wielding two guns and stomping on the head of another robot. Trump’s real-life words pair well with this absurd image: “I am more for the military . . . I am the most militaristic person in this room.” It’s easy to believe Trump imagines a similarly intimidating sight when he looks in the mirror.

“Giant Size Super-Leader Team-Up” takes aim at one of Trump’s most questionable traits: his disturbing man-crush on Vladimir Putin. This cover is based on a Giant-Size Super-Villain Team-up cover from 1975 by Gil Kane and Al Milgrom. Full of kinetic energy, Trump and a shirtless Putin pummel anonymous goons. The quotation shows that flattery gets you everywhere with Trump: “If he says great things about me, I'm going to say great things about him.” They say everyone is the hero of their own story: this cover exposes the macho tough-guy connection he fancies sharing with Putin.

Sikoryak’s reimagined covers create a cumulative portrait of Trump that remains accurate today, though many quotes are from the 2016 campaign. Trump’s issues with women are on display in “Cat Pussy,” which shows a leering Trump gesturing toward a leather-clad, whip-carrying Catwoman as he spews his laughable debate line, “Nobody has more respect for women that I do.” Sikoryak nails Trump’s ongoing war with the media via a Superman comic from 1960 redubbed “Supersad.” Taking the place of Titano the Super-Ape in the original cover, Trump is a monstrous, King Kong-like giant attacking the Daily Planet building, firing Kryptonite eye beams at Superman, whose S insignia is replaced with the word “Sad.” This cover captures Trump’s relentless attempts to crush journalism by making the crushing literal.

Sikoryak has made a career out of parody and homage, which he took to new extremes in another 2017 book: “Terms and Conditions.” In this insane book, Sikoryak turns the exquisitely boring text of Apple’s Terms and Conditions into a sprawling graphic novel, with each page illustrated in the style of a different creator, including Steve Ditko, Roz Chast, H.G. Peter, Lynda Barry, Harvey Pekar, R. Crumb, Carl Barks and Alison Bechtel, plus dozens of others artists. Sikoryak’s skill in mimicking these styles is extraordinary.

If you ever wondered what Mad Magazine would be like if edited by John Cage, Sikoryak’s body of work is the answer. His main influences are Art Spiegelman, Mad (well-known for its parodies), and conceptual artists such as Cage, Robert Rauschenberg, and Marcel Duchamp. With “Terms and Conditions,” Sikoryak also has something in common with poet/conceptual artist Kenneth Goldsmith, who famously turned everything he said for a week into “Soliloquy,” along with other forms of what he calls “uncreative writing.” But Sikoryak doesn’t just present the mundane as art: with his versatile artistic skills, he creates inspired juxtapositions. If Goldsmith does uncreative writing, Sikoryak does creative uncreative comics.

Sikoryak said his favorite artist to mimic is Peanuts creator Charles Schulz, whose work he grew up on: “I’ve been looking at it my whole life . . . I know it in my bones.” He said the trickiest element of imitation isn’t always drawing the characters, but getting inside the thought process of the artist. How do they pace their comics? What’s their mode of storytelling? For this reason, he said Dilbert was “deceptively difficult.” Despite the crude cartooning, Sikoryak found Scott Adam’s storytelling rhythm “very peculiar.” A far different challenge is posed by the intricate, hyper-detailed art of Winsor McCay.

Sikoryak was coy about future projects but did say he’s working on a sequel to his impressive “Masterpiece Comics” and an adaptation of “Moby Dick.” He’s unsure about doing more Trump covers, but let’s hope he continues this hilarious and revelatory project, if the poor guy can stomach Trump any more. This mash-up of comic book art and real-life horror is smart, silly, incisive and hilarious — and 25 percent of proceeds will go to the ACLU. From the size of the book to the scope of the accomplishment, “The Unquotable Trump” is bigly all the way.