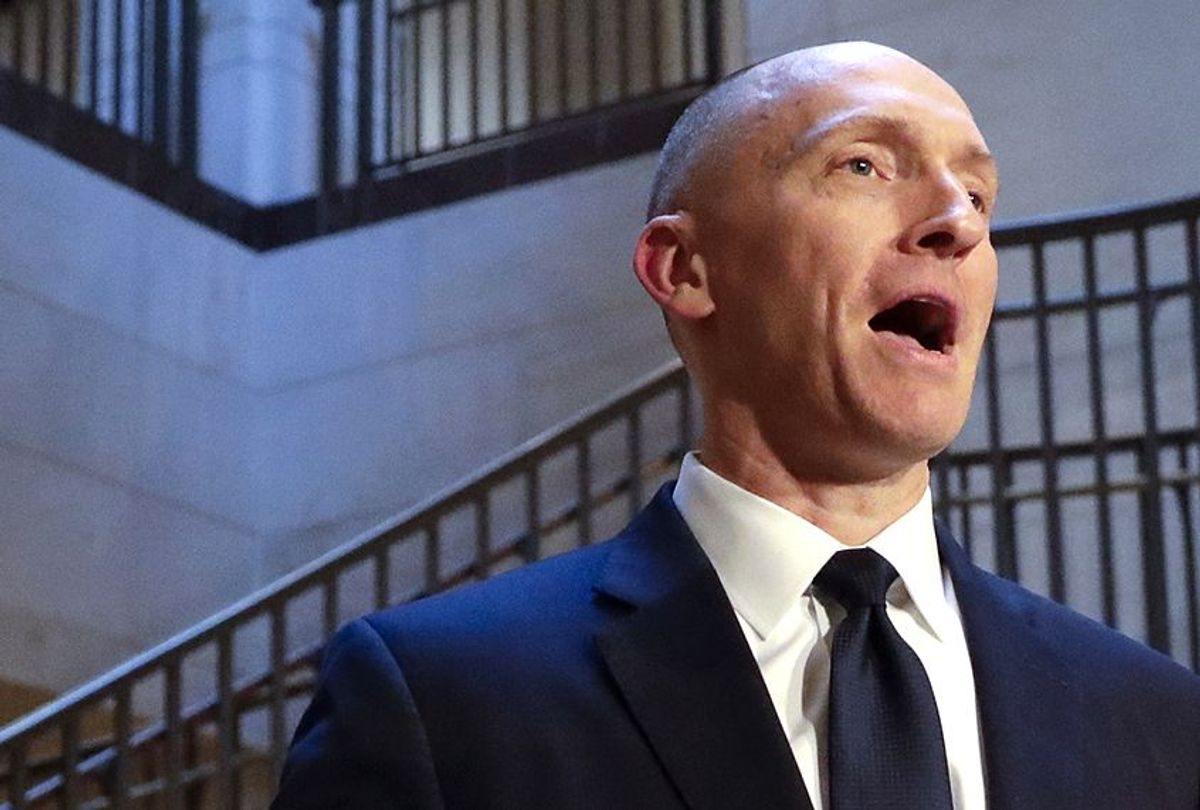 Carter Page seemed determined last week to get himself — and President Donald Trump's inner circle — into legal jeopardy. The former Trump campaign adviser went on live TV to talk about the 2016 election and testified before Congress about his ties to Russia, all without an appointed attorney.

Appearing before the House Intelligence Committee in a closed-door session, Page revealed what he knew relating to the Trump campaign — to the astonishment of just about everybody.

The marathon testimony featured amazing exchanges between Page and Reps. Adam Schiff, D-Calif., and Trey Gowdy, R-S.C., as the foreign policy adviser explained his many contacts in Russia.

Perhaps the biggest disclosure from the seven-hour testimony was the fact that Page went to Moscow and met with Kremlin officials after he had been hired by the Trump campaign.

“Most important, Page ― after being presented with an email he sent to his campaign supervisors, and which he did not disclose to the committee prior to the interview and despite a subpoena from the committee ― detailed his meetings with Russian government officials and others, and said that they provided him with insights and outreach that he was interested in sharing with the campaign,” Schiff said in a statement, HuffPost reported. “Page’s invitation to Moscow and his July 2016 trip was paid for by Russian sponsors and followed his appointment as a Trump campaign foreign policy advisor.”

In the hearing last week, the congressmen were especially curious about Page's ties to Russia. Schiff began the line of questioning with a doozy.

“On July 8 of last year, you wrote in an email to the campaign that you had incredible insights and outreach that you received from Russian legislators and senior members, plural, of the presidential administration,” Schiff said in his questioning. “Were you being honest in your communication with the campaign? Are you being honest in your testimony? Because it doesn’t seem possible for both to be true.”

Page called the encounters he referred to in the email as “just having a warm conversation with individuals” and information he learned from listening to public speeches.

Legal experts were astounded last week that Page volunteered to do an interview with MSNBC's Chris Hayes, considering special counsel Robert Mueller had just handed out indictments in the Russia investigation. Page exuded confidence in the interview, as if he had nothing to hide. But in his closed-door session before Congress, Page constantly got caught with inconsistencies in his testimony. BuzzFeed Legal Editor Chris Geidner compiled some of the most shocking moments from the hearing.

You can basically hear Schiff's voice from the transcript; he can't believe what he's hearing. pic.twitter.com/swmQAyWupJ

Carter Page On Why He Withheld From The Committee The Memo He Sent To The Trump Campaign About His July 2016 Russia Trip: pic.twitter.com/pjYtoZkYIh

Even Gowdy, the Republican representative who masterminded the Benghazi hearings, was dumbfounded by Page's testimony.

While Page was shockingly forthcoming, he still pleaded ignorance to some questions.

Page's testimony also revealed that there could be problems for Corey Lewandowski, Trump's former campaign manager.

The bombshell testimony more or less gave credence to the legitimacy of the Russia investigation, as Page confirmed that he had several contacts with Russia, which he told the Trump campaign about. Page also divulged in the hearing that Trump allies such as Steve Bannon have tried to silence him, advising him not to do interviews. Mueller couldn't be happier at the moment.