Why does the Philippine's strongman president think that Trump is going to care about his human rights record? 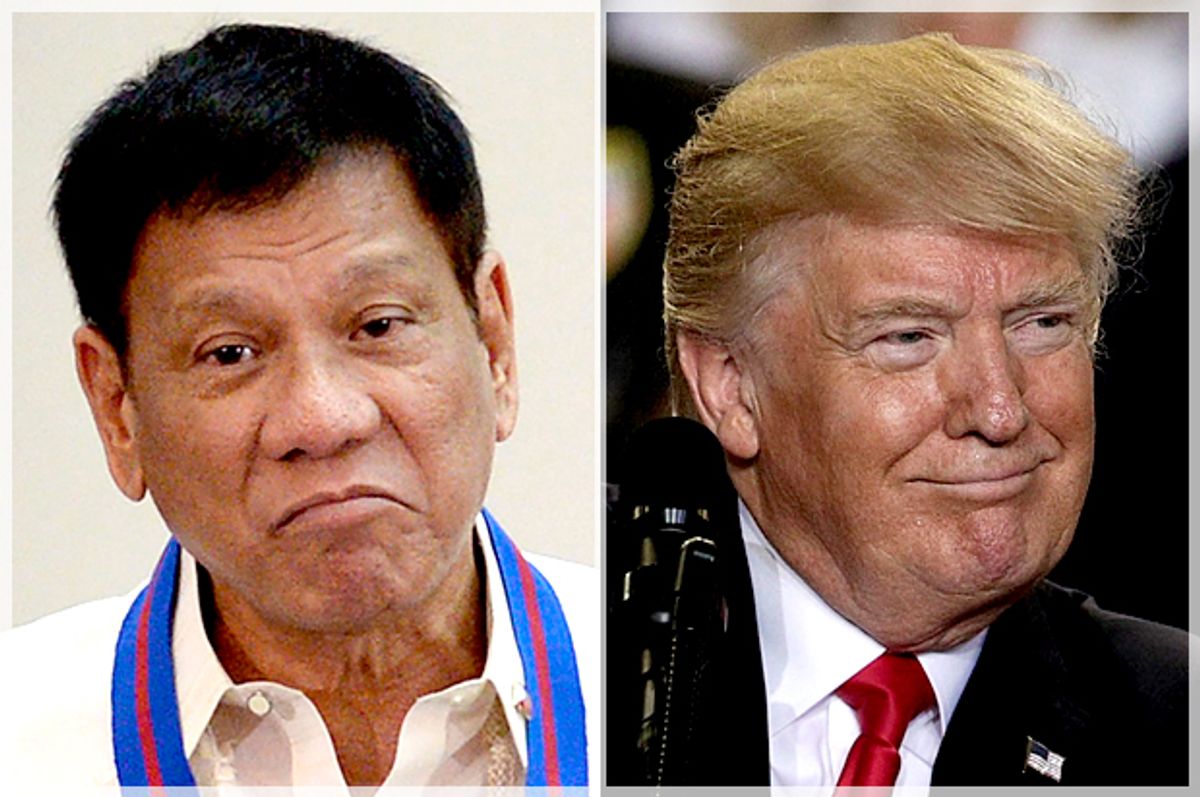 Philippine President Rodrigo Duterte warned President Donald Trump not to chastise him about human rights, saying he should "lay off" the issue — but Duterte never really had anything to worry about.

On Wednesday, Duterte made it clear that he had no interest in discussing human rights with the president, despite the murderous drug war he waged for 15 months that left thousands dead.

"You want to ask a question, I’ll give you an answer. Lay off. That is not your business. That is my business. I take care of my country and I will nurture my country to health," Duterte told reporters, prior to departing for a trip to Vietnam, according to Reuters.

Thousands of deaths have been linked to "to summary executions by the police and their agents," according to Human Rights Watch, a non-governmental organization that advocates internationally for human rights. Duterte ordered a suspension of the Philippine National Police’s drug crackdown operations nearly one month ago, but the damage has already been done. An estimated 12,000 people have been killed as a result of the operations.

Even though Duterte doesn't seem to be willing to listen to Trump's advice on human rights, he probably never had anything to worry about. Trump has praised the Philippine president for his drug war in the past and also told him about two nuclear submarines in the waters off the coast of the Korean Peninsula.

"I just wanted to congratulate you because I am hearing of the unbelievable job on the drug problem," Trump said to Duterte in the April phone conversation of which the transcript was later leaked, Salon reported.

"You are a good man," Trump told Duterte, according to the leaked transcript. "Keep up the good work. You are doing an amazing job."

The conversation may have even provided a glimpse into how the Trump administration and Attorney General Jeff Sessions plan to combat drug crime in the U.S., after having already begun widespread crackdowns.

As Trump told Duterte, "Many countries have the problem, we have a problem, but what a great job you are doing and I just wanted to call and tell you that."

The Philippines will be the final stop on the president's 12-day trip to Asia, culminating in the Association of Southeast Asian Nations summit in Manila. It's worth wondering if, in the wake of Trump's speech to South Korea's National Assembly, the president will spend more time talking about his residential tower than the importance of human rights.