Trump and his allies launch obvious, inept assault on CNN 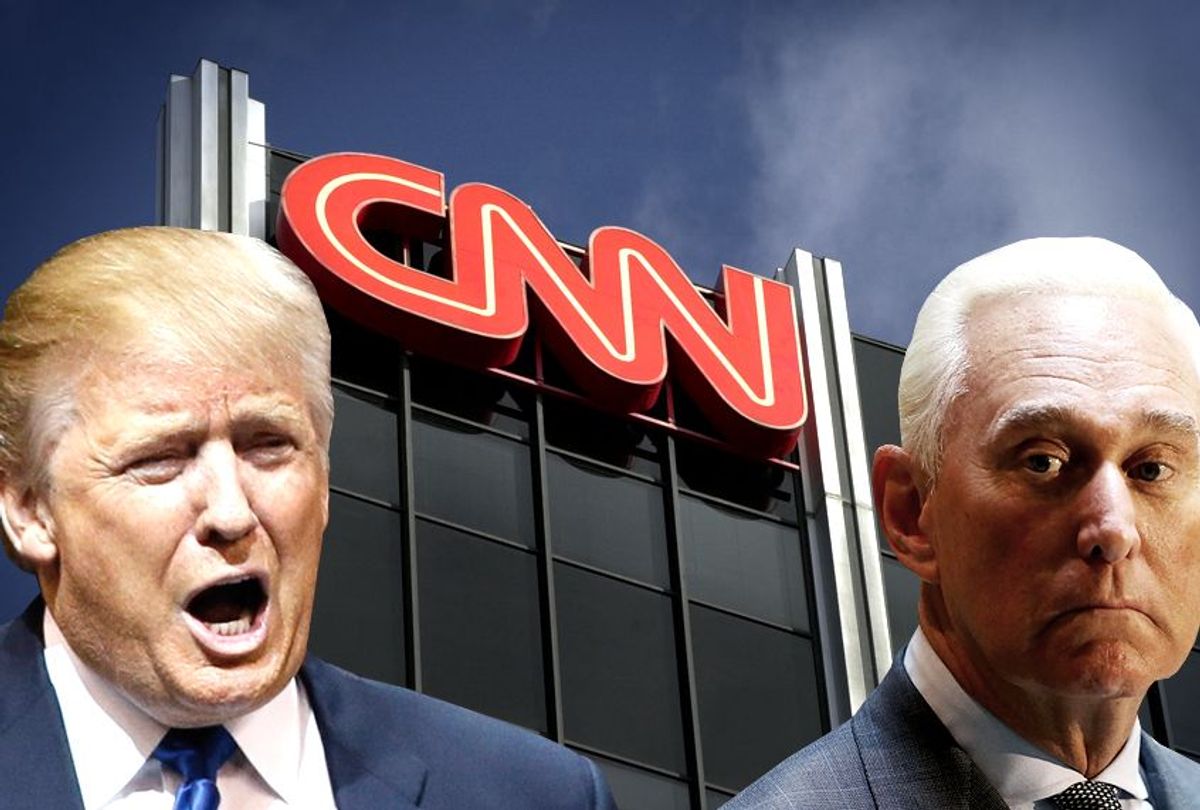 It's not exactly news that Donald Trump has a big mouth. And it's certainly not surprising that his big mouth has an effect on the world around him. He is, after all, president of the most powerful nation on earth, and people pay close attention to every word he says. His undisciplined bluster and divisiveness create a constant state of crisis in his administration. He still doesn't seem to realize that when he spouts his unschooled opinions about legal matters, or attempts to interfere with the judicial system, he potentially affects the outcome and not always in the way he intends.

Back when Trump started running for president he cost himself millions of dollars in contracts when his xenophobic rhetoric proved to be too much for the retail companies and consumer goods that had licensed his commercial brand. Celebrity chefs backed out of restaurant deals, resulting in lawsuits and counter-lawsuits, because of his crude stereotyping of immigrants. Many groups and companies cancelled agreements to do business at his properties. Of course one might say Trump was simply betting that once he became president he could get new customers who wanted to pay him for his "services" rather than his products. So maybe it was just another one of his risky gambits that ended up paying off.

But the big mouth has definitely gotten him into trouble as president. It would take days to list all the gaffes and insults he has tweeted or spoken that have affected his ability to govern or be taken seriously on the world stage. But his careless interference in legal matters are among the most obvious.

For instance, Trump's ugly commentary on the campaign trail about alleged deserter and five-year prisoner of war Bowe Bergdahl, in which Trump repeatedly called for his summary execution, played a part in the military judge's decision to let Bergdahl walk away with a sentence of dishonorable discharge and time served. Naturally Trump weighed in on that too, calling it a" disgrace," having not learned the lesson that as president he should watch his words more carefully.

Shortly thereafter, the president tried to serve as judge, jury and executioner for Sayfullo Saipov, the man accused of the truck rampage in New York. Trump tweeted, "NYC terrorist was happy as he asked to hang ISIS flag in his hospital room. He killed 8 people, badly injured 12. SHOULD GET DEATH PENALTY!" Hours later he again tweeted "DEATH PENALTY!" Defense lawyers and prosecutors alike agreed that these public comments by the president of the United States were inappropriate and would undoubtedly be used to argue that Saipov cannot get a fair trial. They could indeed mean that the death penalty is off the table in this case.

Trump has been screaming for executions for more than 30 years. Before there was Twitter he took out full-page ads in newspapers. It's obviously an obsession with him. He was just a rich blowhard then, and it made no difference what he said. Today he's president and his public bloviation actually matters.

Now Donald Trump's unhinged public ranting is causing another round of headlines. Luckily, in this one case it isn't likely to turn into World War III or cause more divisions within our own country. But the implications are just as dismaying. This time his big mouth is affecting the fortunes of a couple of major corporations, which might be a good thing if the businesses in question weren't media companies and the president wasn't threatening the free press on a daily basis. I'm talking about the proposed merger of AT&T and Time Warner, the latter of which owns CNN, the network Trump has repeatedly called fake news and intimidated with threats of lawsuits and investigations.

During the campaign, Trump opposed the merger on the grounds that it was "too much concentration of power in the hands of too few." That was read by some as a sign that the growing anti-monopoly movement was gaining bipartisan steam. It certainly burnished his allegedly populist image. Needless to say, his billionaire-laden plutocratic administration is not pushing any such policies. In fact, the newly installed head of Trump's antitrust division said last year that he didn't think there was any antitrust problem with the merger.

Maybe there are no "antitrust problems," from Trump's perspective, but there are definitely some "CNN problems." On Wednesday, The New York Times reported that the Department of Justice has “called on AT&T and Time Warner to sell Turner Broadcasting, the group of cable channels that includes CNN, as a potential requirement for approving the companies’ pending $85.4 billion deal.” Since this would be a "vertical merger" of two companies that don't compete, this was a peculiar request that took executives and observers by surprise.

It shouldn't have. Back in July, the Times reported that the administration planned to use the mergers as “a potential point of leverage over their adversary . . . Trump’s Justice Department will decide whether to approve the merger, and while analysts say there is little to stop the deal from moving forward, the president’s animus toward CNN remains a wild card.” A source told Politico on Thursday, "The only reason you would divest CNN would be to kowtow to the president because he doesn't like the coverage. It would send a chilling message to every news organization in the country."

When Trump confidant Roger Stone launched into a series of Twitter broadsides against CNN after the Mueller indictments in late October, promising that there would be a "house cleaning" at the network after AT&T took over, Josh Marshall at Talking Points Memo decoded it this way:

Do I think AT&T will try to gut CNN? I have no idea. But is Trump pushing for it and grousing and gossiping about it with Roger Stone? I’d say that’s a pretty good bet.

For its part, AT&T said it had not contemplated selling CNN and would take the Justice Department to court. The White House insisted that "the President did not speak with the Attorney General about this matter and no White House official was authorized to speak with the Department of Justice on this matter." DOJ spokespeople similarly deny being asked by the White House to demand this bizarre divestment. Well, nobody really needed to make that phone call did they? It has been clear for months what they wanted to do.

This merger deal may not close now, which isn't the end of the world. They are two huge companies that don't need to get any bigger. But the signal that's being sent to the media with this specific request couldn't be any louder.

Trump has interfered with the Justice Department from his earliest days in the White House. He tried to get FBI Director James Comey to lay off his wingman, Michael Flynn. He asked the Department of Justice to drop the case against disgraced sheriff Joe Arpaio, and then pardoned the man when prosecutors refused to do his bidding. Trump went on the radio last week and complained that he's being prevented from personally "doing what he would love to do" with the Justice Department because he is president.

There is nothing he would "love to do" more than destroy CNN and any other media company that tells the truth about him. It's not as if he hasn't publicly said it over and over again. Given his track record, White House denials that he isn't behind this latest attempt to subvert the rule of law simply are not credible.