White women strike back: The demographic that gave us Trump seeks redemption

Hillary Clinton's core demographic betrayed her last year. In an epic election for women, they came back big time 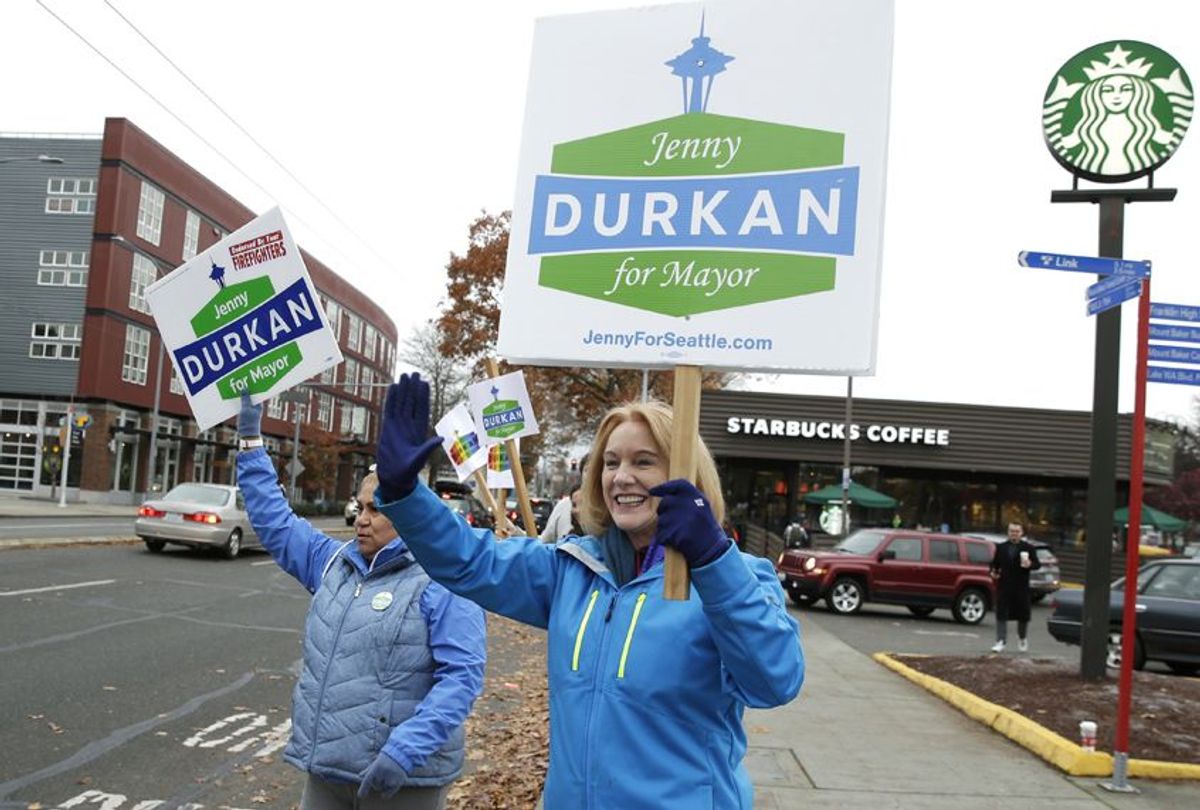 What a difference a year makes.

A year ago, “I’m with her” failed Hillary Clinton, as white women, her supposed natural base, failed to produce a historic presidency.

Between Election Day 2016 and the inauguration of Donald Trump last January, more than 6,000 women contacted She Should Run, a nonpartisan incubator for women interested in running for elected office. EMILY’s List, which works to elect Democratic women, said that 20,000 women had announced candidacies for public office across the United States since Clinton’s shocking loss.

On Tuesday, in the country’s first national election since Donald Trump took office, “I’m with her” did not fail Democrats. A surge of voter turnout swept women candidates into office with historic wins in New Jersey, Georgia, Washington, North Carolina, California, Utah and Virginia, where twice as many Democratic women filed as candidates in the 2017 Democratic primaries as did in 2015.

Democrats didn't even run enough candidates in 2015 to contest the infamously gerrymandered Virginia House of Delegates. They ran 90 candidates for the 100 seats up on the ballot Tuesday and nearly won control of the legislative body in the party’s best performance in the Commonwealth since the 19th century. Almost all EMILY’s List-endorsed pro-choice female candidates won their races in Virginia. Voters in the Old Dominion also elected the first openly trans woman, the first openly lesbian woman, the first Asian woman and the first two Latina women to the House of Delegates seats. Of the 15 seats Democrats flipped in Virginia, all were originally held by Republican men, and 11 of those races were won by women.

In 2016, as the infamous exit polling told us, 53 percent of white women voted for Donald Trump. A majority of what ought to have been Hillary Clinton’s core demographic chose to overlook “grab them by the pussy,” likely because of their aversion to Clinton (and perhaps her husband too). Since then, many of those same women have either been horrified or disillusioned by the disaster that has been the Trump presidency.

Democrats won three statewide offices in Virginia on Tuesday, including the governorship. While Republican Ed Gillespie did well with white women without a college degree – a core Trump group — white women with college degrees — who swung hard to Clinton — favored Democrat Ralph Northam by 16 points. In a huge shift from the 2016 election, married women came out for Northam by 10 points, compared to the one-point lead they gave Trump. Unmarried women went for the Democrat by a stunning margin of better than three to one, and the turnout among single women was 16 percentage points higher than in 2016.

“I’m with her,” in fact, suddenly seems to have a new resonance with many women in a post-Harvey Weinstein world. From #Resistance to #MeToo, white women in their 40s and 50s have renewed their political activism in 2017. Of course, they have often been led and organized by a younger, more diverse group of women, beginning with the massive Women’s Marches in more than 650 cities and towns across the country the day after Trump’s inauguration. Together, the women of the resistance and their allies added up to the single largest day of protest in American history.

The election of a woman in a special state Senate election in Washington on Tuesday gave Democrats control of the state’s entire government and thus control of all three state legislatures and all three governorships on the Pacific Coast. Voters in Manchester, New Hampshire, that state's biggest city, kicked out a four-term Republican mayor in favor of Democrat Joyce Craig, who will be the city’s first female mayor. Emerge Colorado, a nationwide organization that trains Democratic women in running a political campaign, saw the election of three of its first-time candidates to join a historically conservative Aurora City Council.

Too many white women in 2016, it seemed, were focused on the backs of the men still ahead of them, unwilling or unable to see those who had been left behind — most strikingly, themselves. The resistance’s electoral breakthrough in 2017 may not exactly be redemption, but it does serve as a gigantic first step.

“Now what?” many asked, after women marched in the streets earlier this year. Tuesday was a preview. The midterm elections of 2018 will provide the next chapter.

Democrats don't have to make the false choice between identity politics and courting white voters who have sometimes voted Republican. Just look at what voters told exit pollsters on Tuesday: Health care is the issue that can win over white women across the socioeconomic spectrum and the diverse, multicultural and youthful coalition of the Democratic base.